STRATEGIECS in 2020: A Research in the Chaos of  News and Events

STRATEGIECS in 2020: A Research in the Chaos of  News and Events

A truly exceptional year! Significant events have been breaking out concurrently to the field of international relations with its various ramifications, obliging research centers to immediately and appropriately respond to the accelerating changes, for the sake of reflecting their complexity and the impacts of their interactions in the near term at best. This article sheds light on STRATEGIECS experience in 2020, in terms of challenges and achievements brought about in the midst of an atmosphere of anticipation, monitoring and analysis. 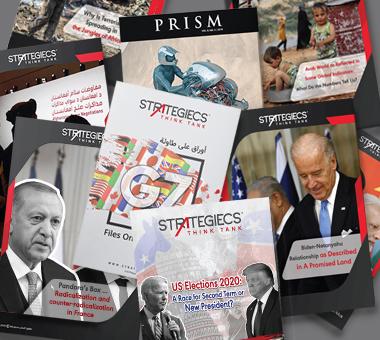 Regardless of the degree to which the outbreak of the novel coronavirus has afflicted different sectors, a damage is now commonsense. Lockdown, whether in whole or in part, has been capable of driving individual and institutions towards the re-orientations of their agendas and aspirations so that they adapt with the new reality imposed by the pandemic.

It might be difficult to conclude the total financial losses due to the pandemic, given that the latter has not ended yet. For the time of returning to "normal life", that is; pre-Covid19, is still subject to scientific, official and other guessing. Consequently, until the return to the previous form or different but stable form of social life, the issue of monitoring and analyzing the work of institutions, with their various types, fields of work and levels of competence, is highly important in terms of understanding the mechanism of their response to the changes reflected in such unprecedented health pandemic. This is not because it is a "viral" crisis, but rather because it is intertwined with the human reality that has reached an extraordinary degree of development and complexity in all fields and in a context generalized to all societies.

Like any other sectors, centers for research and political and social studies as well as media institutions are acquiring a distinctive feature. Since they were forced to devote a good deal of attention to understanding this unique political and economic interaction, which has created the need to reformulate and "re-localize" the various covered events, in order to make them correspondent to the complex effects of the crisis from an analytical and even narrative point of view. Thus, we are facing a critical stage for creating media and research content resulting from the presence of an independent variable that cannot be overlooked, namely; "Covid-19". The new virus is still controlling and directing the various dependent variables, including the political, economic and social relations, even when descending to be dependent and ruled out of the calculations of direct impact. Considering its effects, however, will remain the turning point that governed the course of many events of a given issue or a given stage in the short and perhaps medium term.

Between late 2019 and early March 2020, we, in STRSTEGIECS, have been preparing a report on the most prominent issues of 2020 from an analytic and insightful perspective and within the historical and chronological context of the concerned issue. The report was part of a previous framework including two strategic estimations of 2019 (annual and semi-annual). However, the wide spread of the novel coronavirus has created the need for the fast re-consideration of the content produced in order to follow up with the contemporary events. We were obliged to archive the articles of the mentioned file and turn towards studying the interaction of political events in the Middle East and the world with the pandemic’s repercussions.

As was the case with any other institution, we were deprived of working in offices headquartered in Amman, responding to the directions of the authorities concerned with combating the pandemic. Thus, we started working remotely, the impact of which on the course of work was minimum, however; due to the flexibility of our work that is mainly based on reading. Nevertheless, we sometime have faced a difficulty contacting some Arab and foreign researchers whom we were willing to consult and be acquainted with their analytic visions on certain subjects.

Despite the challenges of remote work and being newly-established institution, we, in STRATEGIECS, have been able to understand in an early phase – despite the difference in opinion - the highly significant role the pandemic has started to play in the international relations arena. We did not place the pandemic as a cornerstone when analyzing incidents taking place during the preparation of tens of reports and stance estimations papers published during this year, on the contrary; we have always been tackling it as an escalating factor in relation to the concerned issue. This is reflected in the two reports “Will the Coronavirus Further Complicate the Upcoming Economic Crisis?” and “Will the US Dollar Lose Its Place as a Global Currency?” in which we aimed at indicating the presence of deep rifts and crises on the national and international arena of the concerned state which already has long and complicated historical context dating back to the time before the outbreak of the virus — the point which is usually left unnoticed in the media coverages of a lot of institutions.

STRATEGIECS has adopted this principle in the analytical papers it published, manifest in the fact that the repercussion of the pandemic on international political and economic relations go side by side and intervene with the course of events of the concerned subject. “Trump Administration Pursuit to Redistribute American Forces in Europe,” for example, was tackled from the perspective of the disturbed Euro-American relationship under Trump’s presidency, with reference to the role of the pandemic in such disturbance. This also applies to other articles and reports any way.

Due to the immense amount of news and reports on the bankrupt of the pandemic firstly, and the distinguished events that took place in the world and the middle east in 2020 secondly (taking into account that the middle east is our main area of focus), we realized that it is best to concentrate efforts on summarizing and directing thoughts towards a specified subject matter.  Therefore, we have prepared “Files on the G7 Table,” in which we discussed points of agreements and disagreements among the group of seven states in the fields of energy, climate, technological competition, Covid-19 crisis, race for the vaccine, competition with China, and others. The file has presented a thorough reading of the most prominent challenges facing the world, and it forms a start point in studying particular issues through a comprehensive perspective showing the nature and degree of the interconnection between global concerns.

The second file was under the title “US Elections 2020: A Race for Second Term or New President?” It tackled the circumstances surrounding the most unique elections in the American history, including articles of US foreign policy, the economy under Trump, the construction of social, cultural and identity currents in the American society, the role of social media in the socio-political arena in the Us, and others.

STRATEGIECS also continued to intensify efforts to improve research work, announcing the launch of a joint project in cooperation with PRISM, a leading magazine in national and international security affairs issued by the American National Defense University. Within the frameworks of this cooperation, the center translates a number of important topics published by the magazine into Arabic, to be the first Arab platform to publish PRISM content in Arabic. This cooperation aims to expand the magazine's readership to include speakers of Arabic around the world.

All things considered, we have been able to get the picture of most of the changes that occurred in the global and regional arenas, whether associated with Covid-19 or not, besides that the policy analysis team never broke with the developments of previously discussed issues. Accordingly, we published a number of articles tackling the growing Chinese influence in the world, the Mediterranean basin crisis due to competition for energy sources between a group of countries there, the transformation of forms of terrorism and its expansion into new regions of the world and its effects on global security, the escalating political crisis inside Israel, in addition to other reports that followed up the development of events in the fields of technology, energy, militarism and economics.

Moreover, during 2020, STRATEGIECS continued to publish stance estimation papers that dealt with rapidly interacting events, taking place both in the region and in the world, from a forward-looking perspective with an analysis of where things were going in the concerned issue, in addition to many videos and informative publications on various topics that interest diverse group of readers.

STRATEGIECS team today is not the one to judge its experience during 2020 for the sake of rendering it a verity; for this is ultimately up to the readers. At the same time, however, it can be said that this exceptional year has led and will lead to sorting the analysis mechanisms used by think tanks to: immediate and forward-looking, conventional and dynamic, deliberate and urgent, and most importantly to objective and biased, especially in such a world of ours in which the polarization of all kinds is escalating.

In conclusion, we hope that we have presented unique and appropriate content to the largest number of readers and interested people, and that we always be in the pursuit of the truth.