Will the U.S. Dollar Lose its Place as a Global Currency?

Will the U.S. Dollar Lose its Place as a Global Currency?

In light of the challenges facing the dollar today, namely the Coronavirus pandemic that the world is suffering today which alters the rules of the global game in a certain way, in addition to the constant pressures the dollar is bearing by China, Russia, and the European Union, particularly the heavy dependency that binds the U.S. and Chinese economies, as well as the continuous criticism directed at the dollar from EU countries; Will the dollar lose its place as a global currency? and will US President Donald Trump reduce the dollar value? 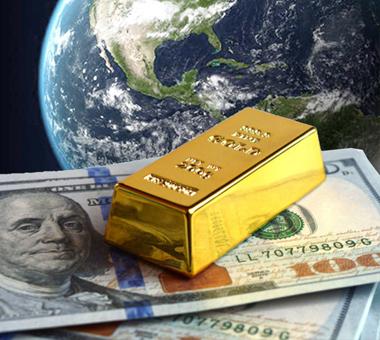 The World Gold Council considered 2018 to have the highest level of annual net purchases of gold by central banks since gold was disconnected from the dollar in 1971 in response to trade war tension between the U.S. and China. This imposed a political and economic haze at the global level, prompting individuals and institutions to resort to safe havens, such as strong currencies (such as the dollar, the Euro, and the pound, etc.) along with gold.

This event - i.e. trade war - pushed actors and non-actors on the international scene to reconsider the position of the United States, and the U.S. dollar as regulators of financial and trade relations in the world. It also demonstrated the dissatisfaction of some of the world's great powers - primarily Russia and China - with the way Washington used this position that it gained since the end of WWII; this was seen by the gold fever that accompanied the decline of the global economy as a whole. This somehow means that competitors of the U.S., as well as its opponents, will do their utmost to weaken the U.S. dollar dominance or limit its impact on their economic activities in an attempt to create a new formula for the international economic equation.

Some believe that the U.S. use of its domestic currency - which is the prevailing international payment instrument in most commercial and financial transactions around the world - to constrict several world economies that are not necessarily in line with the U.S. political vision toward certain files, has caused these countries to not only consider abandoning the U.S. "domination" of the U.S. dollar but also to transition to legislating laws, approving instructions and concluding bilateral and multilateral agreements. As such, this would organize the process of neutralizing the dollar from foreign trade for countries that wish to do so.

China, Russia and the EU vs U.S. Dollar

The average person may note the extents of what Chinese interests have reached - aimed at achieving economic and technological expansion and growing financial openness - is inconsistent with the U.S. position as first in the world in monetary and military terms, especially with the presence of the current U.S. administration in the White House, which resorts to protectionist policies in cases of differing views, as well as competition for geopolitical influence in almost every region of the world, specifically in the Chinese vital field.

Despite all of this, China does not desire an accelerated or sudden clash with Washington, given the heavy dependency that binds the U.S. and Chinese economies to each other. Therefore, Beijing is willing to calmly approach and in the long term disrupt the U.S. position in the global economy little by little. As a result, Chinese interests will not be affected in the first place, as the Chinese Central Bank balances - until now - linking the Yuan to the dollar at a low exchange rate to maintain the competitiveness of Chinese exports.

Even at the peak of the trade war, many predicted that China would sell a large portion of its U.S. Treasury bonds and bills, yet, this did not take place, as China reduced these holdings to about $60b since August 2019, giving up its first place in owning U.S. governmental debt at $1.11t, or 15.5% of the value of this debt in the world, directly behind Japan, which ranked first with $1.26t.

If China were to sink the U.S. bond market, this would mean that its value would collapse, thus, the value of the dollar on which these bonds were linked would also decrease, leading to a significant decline in the value of Chinese exports, especially its exports to the U.S., hence the position of the Chinese economy that relies on exports would be also hit. Perhaps, this shape of the economy is what prompted Chinese authorities in 2013 to adopt a strategy dubbed the “new normal” aimed at shifting the Chinese growth model from reliance on exports to reliance on domestic consumer demand so that economic growth is more sustainable. In other words, China is trying to withdraw from its role as the “factory of the world”, to securing demand in the domestic market.

Both China and Russia are attempting to target the dollar by gradually altering its dominance when it comes to setting oil pricing and trading; this encouraged the spread of the dollar as an international payment method through what has become known as petrodollar, as the first Yuan-based IPO futures contract to be traded on Shanghai Stock Exchange in late March 2018. Furthermore, what strengthens Beijing’s move to offer oil contracts in the local currency is its position as the largest oil importer in the world since 2017. This was preceded by the International Monetary Fund's announcement that the Chinese currency was included in the approved currencies in 2016. In the same year, several leaks were circulated stating that Saudi Arabia plans to sell its oil to China in Yuan under a number of agreements that have been signed during the Chinese president's visit, Xi Jinping, to Riyadh, which Saudi authorities later denied.

The Russian conviction was reinforced by the need to abandon the dollar after the Crimea was annexed to Russia in 2015 and following the subsequent U.S. and European economic sanctions that caused severe damage to the Russian economy, therefore, the Russian Central Bank reduced its holdings of U.S. bonds by $96b since April 2018, with a remaining $10b U.S. government debt at the end of 2019, along with the uninterrupted planning of Russian oil and gas sale in Rubles. This project remains very difficult to implement because the Russian Ruble is poorly traded globally, not to mention its inability to be classified as a stable currency, however, these difficulties can be dealt within the framework of economic cooperation with Russia's economic partners, such as China, India, and others.

The dollar has not escaped criticism from some EU countries as well. For instance, French President Emmanuel Macron confirmed in August 2019 the need to "build European economic and financial sovereignty" independently from the dollar. It is possible to consider the Instrument in Support of Trade Exchanges "Instex" for commercial dealings with Iran, one of the first signs of this "sovereignty" mentioned by Macron; this mechanism was formed as a circumvention of U.S. sanctions imposed on Iran, as the U.S.-controlled Society for Worldwide Interbank Financial Telecommunication "SWIFT" occupies a large part of this mechanism.

In his speech to the European Parliament in September 2018, Jean-Claude Juncker, former European Commission president, expressed the irrationality of the European Union purchasing 80% of its energy needs in the dollar, not Euro.

In March 2020, the Shanghai Cooperation Organization - the world's largest regional organization in terms of both geography and population - decided to abandon the dollar's adoption during economic transactions among its members. This took place when the U.S. entered its violent battle combating the spread of the emerging "Covid-19" virus. It is noteworthy that India agreed to this decision despite its concerns about Chinese influence in Asia, and its military tensions with Pakistan, indicating a consensus among the members of the organization on the need to enhance exchange in national currencies in the face of the dollar.

The move of the Shanghai Cooperation Organization states - which includes: China, Kazakhstan, Kyrgyzstan, Russia, Tajikistan, Uzbekistan, India, and Pakistan – comes to expand the scope of maneuvering in negotiating and understanding the U.S. on certain files, most notably the policy of economic sanctions and the imposition of customs tariffs pursued by the administration of U.S. President, Donald Trump.

The aforementioned step can be seen as taking advantage of Washington's preoccupation with fighting the Coronavirus crisis and as a sign for the rest of the world to utilize this time to search for monetary and economic alternatives away from the dominance of the green currency.

Yet, if we assume that the virus crisis did not occur; there will be a long way for supporters of displacing the dollar or scaling it globally. According to International Association for Energy Economics member, Wadhah al-Taha, the dollar still reigns in the global currencies as it constitutes 90% of the currency market trades, about 60% of the reserves are central banks around the world and 40% of the IMF’s SDR units. These ratios suggest that a lack of understanding of a new reality for managing international monetary reserves, and replacing it with individual actions by either emerging markets or the U.S., will drag the global economy into a catastrophe.

It must be recognized that the Coronavirus pandemic has changed the rules of the game in some ways; the U.S. is sending signals that it is leading an international campaign to hold China “financially” accountable of what the U.S., along with some European countries, considers to be a Chinese deficiency related to the inaccuracy of Beijing’s reports on the spread of the virus, in addition to accusations that are being made from time to time about the virus leaking from a biological laboratory in Wuhan. This would lead to the possibility of Chinese authorities turning a blind eye to plans to internationalize their local currency as a goodwill gesture toward Washington, to avoid a new trade war that will certainly be more ruthless than its predecessor.

In addition, the economic impact resulting from the outbreak of the emerging Coronavirus in the EU countries threatens the collapse and disintegration of the latter, thus the abandonment of the Euro, or in the worst-case scenario its collapse, which will increase the severity of the monetary polarization in the world between the dollar and the Yuan that will have negative repercussions for the stability of the global economy in general.

Finally, it seems that U.S. President, Donald Trump, has abandoned - in a phased manner - his quest to reduce the dollar, in an effort to boost exports, for this has become impossible, especially after the great appetite for the dollar as a safe haven in light of the economic recession that recently hit the world. Nonetheless, this situation will not be prolonged, as Trump's presidential team will return to demand a dollar devaluation even if direct intervention is required away from the benchmark interest set by the Federal Reserve. In addition to seeking to secure his popular base in the upcoming presidential elections, Trump's pretext for devaluing the dollar will be the recession and perhaps the depression that will afflict the U.S. economy. Accordingly, the value of the dollar must be reduced to move the economy, in case the zero interest determined by the Federal Reserve is ineffective.

The endeavor to create a new international monetary system is not only related to the nature of political elites that control countries of great power in global decision-making, nor the way these elites express themselves according to their interests, or the spread of the emerging Coronavirus but – along with this all - it is related to the level of dispute among great powers over the functioning of the global economy and the new instrument that the market creates for circulation. This instrument can serve as a new national currency (such as the dollar, yuan, etc.), a partial return to the gold standard, or a complete entry of digital currency.