Following clashes resulting in the killing of dozens of soldiers, Indian-Chinese tensions witness an unprecedented escalation, as the Galwan Valley confrontations on June 15, 2020, are the first to result in casualties since 1975. Hence, this paper discusses the historical tensions between the two countries, the factors that led to such escalation, and the forecasted outcomes of current events. 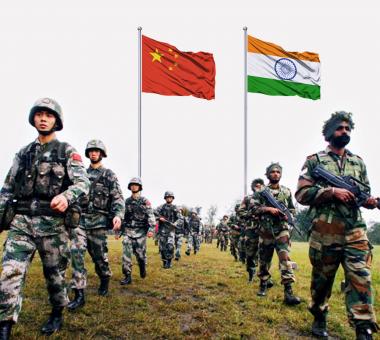 Following clashes resulting in the killing of dozens of soldiers, Indo-China tensions witness an unprecedented escalation, as the Galwan Valley confrontations on June 15, 2020, are the first to result in casualties since 1975. The Galwan Valley is a part of the Ladakh region, a disputed area along the Himalayan frontier that has a strategic location separating the Chinese district of Aksai Chin from India's Ladakh.

These confrontations resulted in 20 casualties and 76 injured soldiers on the Indian side, whereas China released no information on its casualties, given the Indian Ministry of External Affairs announced that both parties suffered casualties from this engagement.

In the meantime, each country is blaming the other; on one side, China insists that the Galwan Valley is under its sovereignty as stated by Foreign Ministry Spokesperson Zhao Lijian that: "the Galwan Valley lies on the Chinese side of the LAC, in the western sector of the China-India border." He added that the Indian breaches, soldiers crossing from the Indian border, are the reason behind the recent escalation. In response, India denies these allegations, which the External Affairs Ministry spokesman, Anurag Srivastava deemed as "unacceptable", adding that the engagement came as "an attempt by the Chinese side to unilaterally change the status quo there (Galwan)".

The current Indo-Chinese strain is not the first of its kind to happen along their shared border, as it is preceded by a long history of events, engagements, and clashes which included witnessed a Blitzkrieg in 1962 after China gained control over parts of Arunachal Pradesh State of India. This war was followed by several engagements that resulted in casualties in both parties, the latest of which was in the year 1975.

In 2017, the ceasefire in the border area was tested when China attempted to build a new road through the disputed area, triggering confrontations and clashes without the use of firepower. These clashes lasted for 73 days on the Doklam hills, which is a disputed hill between Bhutan, China, and India. On the 5th and 9th of May 2020, clashes were reported between the soldiers of both countries in two areas: the first is Pangong Tso Lake of Dalakh, and the second is Nathu La of East Sikkim district in India.

The key reason behind the turning tides in the Chinese-Indian border is the inability to solve this dispute over the shared border between the two countries; this border is considered the longest undemarcated international border in the world at 3500 km. The historical conflict on the eligibility of sovereignty persists over several areas of these borders, including Arunachal Pradesh Plateau (a border region at the crossroads between China, Bhutan, and Sikkim district of northeast India), and Aksai Chen (a disputed area between the two sides, to the west of Himalayas, and is under China). Furthermore, China claims about 90,000 square kilometers of land in northeast India, including parts of the Arunachal Pradesh Plateau. Meanwhile, India calls China’s control of 38,000 square kilometers of Aksai Chen and part of the Ladakh region an occupation. Consequently, it is unlikely for these limited clashes between the two countries to be permanently ceased.

The "LAC" between both countries has two issues; the agreement did not resolve the conflict, and each country retained its border demands, in addition to their disagreement on a clear definition of this line.

This agreement is not translated into reality on the ground most of the time, considering the ambiguity of this line in several regions. Therefore, most clashes and confrontations occur due to the different assessments of the actual LAC location. For instance, in his commentary with CNN News on June 18, 2020, retired Indian general, Singh Brar, stated that: "at strategic and operational levels, both militaries have exercised restraint. However, at the tactical level, face-offs occur due to differing perceptions of where the actual border is as the LAC is not delineated on the ground."

The changing nature of the border further complicates identifying the actual LAC border, given the presence of rivers, snow, and rocky collapses, and therefore the border patrols of each country believes the LAC is within their borders.

Despite the current negotiations to ease tensions, each country maintains a high level of hostile national discourse towards the other. On June 21, 2020, the Indian Prime Minister, Narendra Modi stated: "I would like to assure the nation that the sacrifice of our soldiers will not be in vain." Moreover, recent confrontations are not amongst Modi's biggest concerns, as the Indian government faces the repercussions of the Coronavirus outbreak, with 456 thousand confirmed cases and about 14 thousand deaths as of June 25, 2020, according to the World Health Organization. These numbers forced India to extend the lockdown across the county, which in turn led to further Indian economic deterioration, not to mention the entrapment India senses in its vital surroundings due to many border conflicts with three of its neighbors: China, Pakistan, and Nepal.

Nonetheless, there seems to be a positive side to this; while India and China are both nuclear powers, no firepower was used in any conflict between them since 1975 until the recent June 2020 incident. Also, both countries abided by the rules of engagement specified in Article (VI) of the Agreement Between India and China on Confidence Building Measures in the Military Field Along the Line of Actual Control in the India-China Border Areas signed in 1996 by the two countries, which stipulates that "neither side shall open fire, cause bio-degradation, use hazardous chemicals, conduct blast operations or hunt with guns or explosives within two kilometers from the line of actual control."

Additionally, there are concerning signs of increased militarization of the border region, after both countries constructed an infrastructure to serve military purposes in the region, after the 2017 Doklam events. For example, India has established border roads, rail systems, in addition to helicopter airstrips, on the border. To further support the reinforcements movement in the event of an emergency confrontation, India has constructed a road that runs thousands of kilometers and was linked to an airbase that was activated in 2008. China responded by deploying thousands of its soldiers, digging trenches, and transporting heavy equipment within a few kilometers which India considered under its sovereignty; according to a BBC report published on May 30, 2020.

The border region is also witnessing increased military deployments. Since April 2020, the two countries have deployed heavy weapons, including tanks and artillery, in addition to military forces. A military source told the Chinese "Global Times" newspaper that the Chinese army took necessary measures and strengthened its forces to maintain the sovereignty of China and border security. Michael Kugelman, Deputy Director and Senior Associate for South Asia at Wilson Center, considered this as a kind of "showcasing strength". On June 5, 2020, the Chinese People's Liberation Army held military exercises and drills in which the air force, infantry, and tanks were used to enhance the army's readiness in countering any escalation on the border with India; according to the "Global Times."

On the other hand, the Indian Armed Forces sent significant reinforcements to the LAC in May 2020. However, serious reports have been circulated across news platforms regarding the Indian army's review of the rules of engagement agreed upon with China, in which India authorized its field commanders to use firearms in "exceptional" circumstances, against the backdrop of border confrontations in Ladakh. India's Minister of State for Home Affairs, Kishan Reddy, said on June 21, 2020, that: "The Army has been given "full freedom" in dealing with China and protecting India's territory and its men". This would lead to an arms race that could turn the repeated confrontations between the two nuclear powers into more lethal clashes, as reported by military analysts at New York Times on June 18, 2020.

The agreement between the two countries entails avoiding war and seeking talks as the only means of easing tension, for any military conflict will result in serious consequences, especially at a time when both sides are seeking economic recovery following the Coronavirus crisis.

In the same vein, India acknowledges the capabilities of its Chinese neighbor, which has grown significantly in recent decades to become the second-largest military and economic force in the world. Despite India's rise as a global power, its capabilities are dwindling compared to China. Militarily; India's spending reached about $66.5b in 2018, which is relatively small compared to China's spending of $250b in the same year, per World Bank data. In economic terms, India's GDP was about $2.7t, whereas China's was about $13.6t, according to World Bank data for the year 2018.

Hence, India's conditions nor capabilities allow for measures similar to those taken against Pakistan. When the Pakistan-based Imam Mahdi's army killed 46 Indian soldiers in a blast in Indian Kashmir on February 14, 2019, India responded with raids in Pakistani Kashmir.

Having said that, India utilizes the economic response approach with China, rather than military escalation, as recent confrontations are likely to have an economic impact on China. The Indian authorities have made several economic decisions to punish China; for instance, on June 19, 2020, an Indian minister has called on the government to close Chinese restaurants. Besides, the state government of Maharashtra- the third-largest state in India- has put on hold three major agreements signed with Chinese companies; an important contract for a Chinese construction company with the Indian Railroad Company is to be canceled, according to the "Indian Express" newspaper. The Ministry of Communications has also urged "Bharat Sanchar Nigam Ltd", a large Indian state-owned telecom company, to stop using Chinese equipment in any updates to the company's facilities. According to the same source, all networks in which Chinese equipment is used, will be subject to scrutiny to ensure its security and safety.

In addition to government and official measures and statements, popular calls for boycotting Chinese products and goods have increased in India after the recent confrontations; such calls will have a significant impact on the Chinese economy, whose exports to India in 2018 amounted to nearly $76b, as reported by the World Bank.

At a time when military escalation is unlikely to occur between the two countries, de-escalation appears to bet the best option; in a press conference on June 22, 2020, Chinese Foreign Ministry Spokesperson Zhao Lijian reiterated that: "China and India are resolving the issue on the ground through military and diplomatic channels".

Both countries have a historic commitment of non-use of firepower in conflicts and confrontations along their shared border, despite repeated clashes. Nonetheless, both sides showcased the ability to achieve partial peace and stability in the disputed areas in the implementation of the 1993 Agreement on the Maintenance of Peace and Tranquility, which calls for peaceful channels of dialogue and consultations.

Despite all, border relations between India and China will remain between high and low tides, given it is likely to witness several clashes and confrontations over the upcoming days, weeks, months, and even years. This is due to the difficulty of reaching an agreement over final border demarcation as this disagreement includes many districts over the border, all of which are of strategic importance for both sides, not to mention the multiple states involved in such border dispute, namely China, India, Nepal, Bhutan, and Pakistan.