The Success Chances of an "Arab NATO"

The Success Chances of an "Arab NATO"

An "Arab NATO" and the Middle East Stability

Forming an Arab NATO would be a challenge for member states and countries that sponsor it. Although forming this cooperation has become necessary to protect Arab national security and to defend common Arab national interests, agreeing on such a massive unified military project is not an easy decision. This article responds to questions regarding the success of this project, its effect on the Middle East stability, and potential challenges it could face. 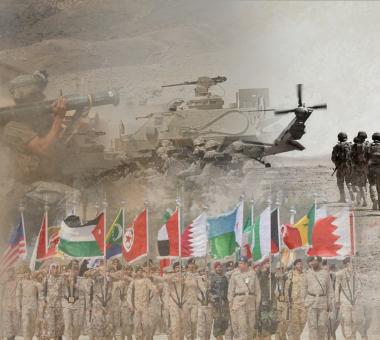 An Arab Military Cooperation amid the Variable Strategic Environment

Such a project is a challenge for the countries that will take part in it or those who will sponsor it. This cooperation has become a major requirement to protect the Arab national security and to constitute a powerful and deterrent shield to safeguard the common Arab national interests. Nonetheless, agreeing on such a massive unified military project without taking into account the obstacles and repercussions would lead to an immature project or one that does not meet its expectations and desired goals.

The majority of researchers and observers believe that the Cold War has ended with an imbalance in the world order both at the global and regional levels. The balance of powers has also been affected by the collapse of the Soviet Union and the fall of the Berlin Wall in 1989, leading to the outbreak of three fierce regional wars. The most notable is the first Iran-Iraq war, which has shaken the balance of power and was later followed by the Gulf War, and then the fourth-generation wars that hit the region in 2011.

Today's world, which is led by the U.S., is at the peak of forming international and regional alliances to combat terrorism in the world in general, and in the Middle East in particular. This has indirectly led to a state of imbalance in the region, prompting countries to resort to finding alternatives either for protection, restoring the balance of powers, or better controlling their positions.

The Middle East, in particular, is struggling with conflicts and competition over power and influence. Therefore, the need has emerged to establish an Arab military project called The Arab NATO", which could help in resolving bilateral and multilateral Arab crises, especially after several repercussions have targeted the sovereignty of countries through vertical and horizontal cracks in the structure and components of the single state.

Sectarian and religious identities have prevailed vis-à-vis national identities, while levels of outrage, tension, suffering, and fear have increased among the majority of nations in the Middle East. This was especially the case after the emergence of trans-border extremist states and organizations such as ISIS, Al-Nusra Front, and other entities in Syria, Iraq, Yemen, Libya, and Somalia, leading to the formation of international and regional alliances primarily to combat terrorism.

However, these alliances may become a means of controlling resources and interfering in the sovereignty of countries that are already suffering from imbalances in the elements of their national power. They also lack integration and homogeneity among the society components.

This brief analysis of the international, regional, and domestic variables of the strategic environment urges us to raise the following questions:

1. Do we need a joint Arab military force?

2. What tasks and duties would be assigned to this force?

3. When, how, and where would this joint force be used?

4. What is the impact of such a force on the concept and strategy of the Arab national security?

5. How could a common Arab defense strategy be developed in order to establish a joint Arab military force in light of the differences in the military doctrines and military strategies among the Arab countries, in addition to the differences in training, armament, and the variant battlefields and fighting experiences?

6. How would this force affect the security of the region in the presence of military forces like Turkey and Iran as well as a clear Russian expansion in the region?

The accelerated regional transformations and developments make the Arab countries in dire need of a deterrent force that is capable of protecting their national security. However, the correct answers to these and other questions must be given clearly and impartially to ensure that the project would not be a reason for conflict while it should be a source of the region's stability.

The balance of powers is not a mere conflict between countries for the sake of gaining the capability to persuade, influence, destroy, subjugate, dictate, deter, or prevent other countries from attacking or threatening their interests. It is rather a political mechanism to stabilize the world order, safeguard the international legitimacy, and protect the people’s right of decent living.

However, today's world is witnessing quite the opposite with neither a balance nor international legitimacy, wherein the use of force in international relations has become normal behavior. Therefore, it is hard to envision an existing balance at the regional levels while it is absent at the international level.

Hence, it can be said that the balance of interests is a mechanism that can be flexibly interpreted and applied but cannot substitute the balance of powers in the current strategic environment, where priorities are changing in an accelerating and dynamic manner.

The strategic environment of the Arab world has witnessed several changes and transformations since the 1950s, in addition to the accelerating events and changes in balances and polarization, as well as the imbalance of powers in Iraq, Syria, Yemen, and Libya. In light of such variables, several factors of pressure would affect forming a strategy of such a military force (i.e. the "Arab NATO") in terms of mobilization, training, armament, and funding, in addition to linking with the intersection of interests and goals regionally and globally.

The Most Significant Factors of Pressure that Affect the Success Chances of an "Arab NATO":

1. The consequences of extremism, violence, and terrorism; the intersection of interests; the absence of moderate and resistance regimes; the challenges emanating from the different sects and ideologies; and the extremely weak capabilities and morale of some Arab armies as a result of domestic conflicts and civil disputes.

2. The repercussions of the Iranian nuclear issue and the arms race in the region; the impact of the axes policy and military alliances on the form and nature of this joint force; how to deal with ISIS and Al-Qaeda in some Arab countries in Asia and Africa; in addition to the multiple conflicts in neighboring countries of the Arab world.

The indications and dimensions of an "Arab NATO" seem to be governed by several major factors. These include:

1. Challenges related to the Arab geographical location and how it may control the force in terms of its ability to move and its strategic openness; the challenges and opportunities in the Arab countries, the region, and the neighboring countries.

2. Challenges related to the manpower and their capability to comprehend, use, and apply modern military technology, in addition to the needed skills to utilize such modern military equipment in training and actual military operations.

3. The diverse trends and political units in the Arab world wherein military strategy follows politics. Therefore, the formulation of a political-military objective must pass through the Arab League, where decisions are taken unanimously to be binding, which is the most significant obstacle.

4. The differences in strategic perceptions among Arab countries, which are evident in terms of the nature of threats and challenges; the imbalanced political and social systems and values in some countries; the wide range of threats; the different elements of military politics and institutions including the recruitment process, sources of armament, training, administrative support, fighting strategies, and military terminologies which are dissimilar from one country to another.

5. The repercussions of the multifaceted, complex, and intertwined Arab issues; the ongoing fights and the emergence of many organizations with differing ideologies and strategies that call for dividing Iraq, Syria, Yemen, and Libya, as well as igniting the hotbeds of conflicts.

6. The weakness of heavy and medium-scale defense industries in Arab countries. Such industries (if there are any) are non-competitive at the regional and international levels. Arab countries also lack the ability to exploit and apply modern technology. Instead, they rely on foreign expertise to various extents.

The challenges facing an "Arab NATO" include the collapse and disintegration of official armies in several Arab countries; the transformation of such official armies from national into sectarian armies for the sake of protecting some ruling regimes; in addition to the lack of agreements and consensus among the Arabs.