Will the Collapse of U.S. Oil Collapse Lead to Trump's Downfall?

Will the Collapse of U.S. Oil Collapse Lead to Trump's Downfall?

The world is witnessing a weak demand in the energy market given economic and productive activities' stoppage due to the Coronavirus pandemic, so what is the reason for this historic WTI decline? Will the collapse of U.S. crude cause Trump's downfall? In light of the chaos of expectations for oil prices in the near future, will the demand for oil remain weak if the Coronavirus crisis does not end? 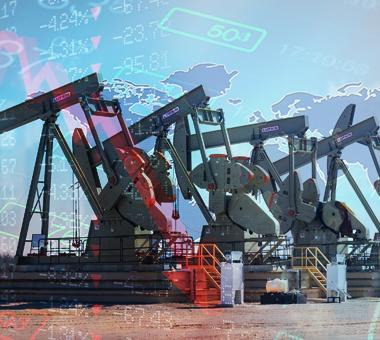 On April 10, 2020, Russia and OPEC member states agreed to reduce oil production by 10 million barrels per day during the next two months of May and June, provided that the shares of Saudi Arabia and Russia are 2.5 barrels of the total reduction value. The U.S. administration approved of this agreement after the oil market witnessed a significant decline in prices, especially after the OPEC+ failed to reach an agreement to reduce production, which started the war of production and prices between Russia and Saudi Arabia.

Despite the agreement that restored notable stability in oil prices demonstrated by the "Brent" index (the market standard) performance as it has not been lower than $25 since the beginning of April 2020, the West Texas Intermediate (WTI) tumbled below zero per barrel on April 20, 2020, raising many questions about the cause of this; the entire world is witnessing weak demand in the energy market for economic and productive activities’ stoppage due to the Coronavirus pandemic. So, what caused this historic WTI decline record?

Simply, as with any socio-economic issue, there is a chain of causation for the collapse of U.S. crude, the first of which is the weak global demand for oil due to COVID-19. This led to the accumulation of oil barrels in U.S. refineries and stores for there is no market to accommodate the disposal of this product. This was the second reason that led to the third, as the owners of U.S. crude contracts for May which are due on April 21, 2020, attempted to get rid of these contracts. Here, the trading of May contracts at a sub-zero level indicates that the seller is ready to provide the amount of oil stipulated in the contract, in addition to paying the cost of barrels as per the minus trading. Despite the loss, it would be less expensive for the seller than storing it, along with paying for the costs of transportation and other logistic requirements.

As for the domestic political level in the U.S., this collapse in crude prices comes as another factor that would pose a new challenge to the possibility of U.S. President Donald Trump winning a second term in the presidential elections to be held on November 3, 2020; Trump’s opponents, the Democrats, continue to accuse him of responding late to the spread of the Coronavirus, placing the U.S. at the top list of the number of infections and deaths around the world, as well as its catastrophic impact on the local economy.

By observing reports of forecasts of financial organizations and institutions, we can know the near future of oil prices; according to the latest U.S. Energy Information Administration report issued at the beginning of April 2020, the average prices of WTI and Brent crude for this year were reduced; as the agency set its expected WTI oil prices at $29.3 a barrel, about 23% less compared to expectations for the March report. The administration also reduced its expectations for the price of Brent crude by 24% to reach $33 a barrel. Moreover, the administration expects U.S. crude production to reach 11.7 million barrels per day, a decrease of 9.5% compared to previous expectations.

Given the expectations following the collapse of WTI crude price to negative levels, some experts believe that the demand will remain weak if the Coronavirus crisis does not end; therefore, this may affect prices in the markets, pushing them to further decline.

It is also very difficult to talk about oil prices in the range of $40 before the end of this year if there are indications of the near end of the Coronavirus crisis. Some experts added that if the situation remains as it is now, U.S. crude prices may decline below the level of the prices currently registered, and Brent may also drop below $20 once more.

Barclays has lowered its forecast several times this year, expecting an average WTI crude price of $28 per barrel in 2020 due to the demand shock caused by the Coronavirus crisis and the supply shock caused by the Saudi-Russian oil price war that was later resolved. These cuts came in at more than $12 after the bank saw that all major banks lowered average oil prices to $30 a barrel in 2020.

In the same context, Goldman Sachs has drastically reduced its forecast for oil prices this year more than once; the bank believes that WTI and Brent crude prices will reach an average price of $22 per barrel during the second quarter of 2020. A few hours later, the bank lowered its forecast to $20 per barrel, which raises big questions on lowering oil price expectations more than once within one single day. This may indicate that price expectations may have been out of the analysts’ control, so Jeffrey Currie, economist and the Global Head of Commodities Research in the Global Investment Research Division at Goldman Sachs, said that "demand losses across the complex are now unprecedented", and the results of these words came as demand for oil decreased by 8 million barrels per day.

It was the contracts of WTI for May that collapsed, but this free fall in prices began to spread in the global oil market; as of writing this paper, Brent crude contracts for June fell by more than 23%, and future U.S. NYMEX contracts for June also declined to about 20.8%. Moreover, the U.S. administration is considering halting oil shipments coming from Saudi Arabia, which would hit the oil market in the Middle East region in general.

The current situation makes it difficult to predict the prices of WTI or Brent crude, as evident by the largest financial institutions and banks changing their expectations within weeks and even within days and hours. However, in my perspective, if the Coronavirus continues to prevail in the global scene, this may lead to further declines in oil prices, due to the total lockdown in the countries, and consequently the increase in the size of the oil reserve, as there is no place to store this surplus of oil and there is no time to refine it. This indicates that there is no relative increase in demand during the year 2020 due to the current lockdown, knowing that there are several statements by some observers that the storage problem will not pose a major dilemma with the beginning of the second half of 2020, given that many Western countries, led by the U.S., have started to reduce isolation measures and house quarantine, which may contribute to reviving demand. Having that said, the latter may be negatively affected, given the warnings issued successively by the World Health Organization, calling for patience in easing isolation procedures.

It is remarkable that the catastrophic prices have affected only the price of a barrel of West Texas crude and did not extend to U.S. Brent crude!

The price war waged by major oil producers such as Russia and Saudi Arabia has undoubtedly led to an increase in oil reserves and consequently to a decline in its prices in general, from which China has benefited as it is the largest consumer of crude oil in the world. It is highly unlikely that the collapse of West Texas oil prices will affect the MENA region because its pricing process is regional, and therefore we will see its effect in North America and on small and medium U.S. oil companies only.