On 5 March 5 2020, Turkish-Russian talks on the recent clashes in the city of Idlib has resulted in signing an agreement aimed at ceasefire and returning those displaced to their places of residence; what are the contents of this agreement? what are the motives and gains behind it? does the agreement carry the reasons for its steadfastness? 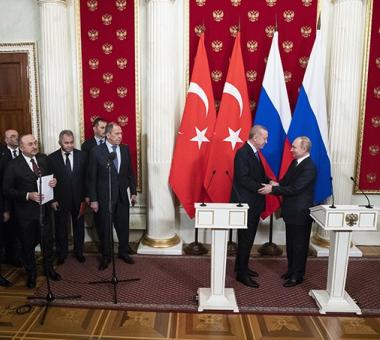 On 5 March 2020, Turkish-Russian talks on the recent clashes in the city of Idlib have resulted in signing an agreement aimed at a ceasefire and the return of displaced persons to their places of residence; what are the implications of this agreement? What are its motives? Does the agreement hold the reasons for its steadfastness?

The escalation of clashes in Idlib, northwestern Syria, has contributed to tension in Turkish-Russian relations, which culminated on 27 February 2020, with the killing of at least 33 Turkish army soldiers with airstrikes. As a result, Ankara held the Syrian army responsible for it, while the Russian Ministry of Defense said: "Turkish soldiers were among the combat units of terrorist groups attacked by Syrian soldiers", which Ankara strongly denied, as casualties of Ankara in Idlib reached 55 soldiers in February 2020. These developments came in light of the deadline given by the Turkish President, Recep Tayyip Erdogan, to the Syrian army to withdraw beyond the agreed Turkish observation points under the terms of the Sochi Agreement; he had issued a warning on the 19th of the same month, stating that "an attack on the Syrian army forces is imminent".

After weeks of agitated escalation between the conflicting parties, opposition forces lost their strategically important point of "Saraqib" located at the international crossroads "M4" and "M5", which the Syrian army took over in addition to "Ma'arrat al-Numan", "Sher Maghar", “Khan Sheikhoun”, and “Mork”, besieging Turkish control points in those areas. The Syrian army also regained control of the international M5 road linking Damascus and Aleppo, and large geographical areas that were located within the borders of the Sochi Agreement signed in 2018 between Russian President, Vladimir Putin, and his Turkish counterpart, Recep Tayyip Erdogan, according to which Idlib was spared any military attack by the Syrian army.

Moscow and Ankara stand on opposite sides of the Syrian crisis and its continuous field developments, especially in Idlib, which, for Ankara, represents the soft flank of Turkish national security, whereas Russia supports the Syrian army's operations to control the last strongholds of the armed opposition and end the 9-year war. Nevertheless, Russian-Turkish relations are too profound to be bent over Idlib, as the two parties have common interests in many areas including energy, gas, weapons, and tourism. Despite the complexity of regional and international files that affect those ties, namely the refugee's file and its complications, the Libyan crisis, and the US-Turkish relations. Furthermore, their efforts in avoiding a military confrontation that undermines their important interests, Russian and Turkish presidents have realized the necessity to establish an agreement maintaining bilateral relations, even in a phased manner and with a minimum of reasons for permanence. In addition to the Russian-Turkish relations factor, which is the most prominent starting point in the recent talks, several factors led each party to reach a truce, as follows:

1. Achieve a modified version of Adana agreement; that is, to ensure that Turkey has only its border security, under Annex IV of the Adana Agreement signed between Turkey and Syria in 1998 which states that: "the Syrian side understands that its failure to take the necessary measures and security duties, stated in this agreement, gives Turkey the right to take all necessary security measures within 5 km deep into Syrian territory".

3. Eliminate the presence of the Sham Liberation Army, formerly known as Al-Nusra, and separate opposition fighters from the terrorist groups.

4. Syria is the strategic center of the Russian naval units and a supply station for its ships in the Mediterranean, and therefore any step to solve the "Idlib dilemma" will positively reflect on the Russian presence in the region.

1. Create a safe zone in northern Syria, to absorb refugees and alleviate their suffering.

2. Reduce pressures from inside Turkey, especially from opposition parties, whose rhetoric against the Justice and Development Party intensified after the loss of Turkish soldiers in the Idlib conflicts.

3. NATO's failure to fulfill its promises to support Turkey, especially after it enacted Article 4 of its Treaty, which states that “the parties will consult together whenever, in the opinion of any of them, the territorial integrity, political independence or security of any of the Parties is threatened". This prompted Turkey to resort to a truce with Russians, decreasing its reliance on Western or U.S. support.

4. In light of the absence of U.S. support following Ankara's direct request for "Patriot" missiles from Washington, and due to NATO's failure to support Turkish forces in Idlib, a battle against a major international force, such as Russia, may seem uncertain. Hence, Ankara had to go for the armistice, to maintain its gains on the ground; otherwise, its losses would double.

Contents of the Turkish-Russian Agreement

The Kremlin summit that brought together Russian President, Vladimir Putin, and his Turkish counterpart, Recep Tayyip Erdogan, on Thursday, 5 March 2020, led to the announcement of an agreement that is an annex to the Sochi talks that started on 17 September 2018, calling for de-escalation agreement in Idlib. The summit's outcomes also included stopping all military activities along the seam line in Idlib as of Thursday - Friday midnight (5 March 2020; the same day the summit was held), in addition to establishing a security corridor stretching to a depth of 6 kilometers from the north of the international road “M4”, and to a depth of 6 km from the south of this road. Furthermore, the summit concluded deployment of Turkish and Russian patrols as well, starting on 15 March along the “M4” from “Trenba” village (2 km from the west of Saraqib) until Ain Al-Hour area, as well as preventing civilians from displacement while facilitating the return of those displaced to their places of origin, and combating terrorism in all forms; especially the fight against organizations listed in the UN Security Council's lists for terrorism.

It seems that the ambiguity of the agreement has started to clear out, for its provisions did not clarify the fate of Turkish observation points that are under the control of the Syrian army, nor did they clarify the future of south of the safe passage surrounding the Aleppo-Latakia road "M4", besides, it did not reveal any details on the highway between Aleppo and Damascus, "M5" nor on the mechanisms for returning hundreds of thousands of refugees to their places of residence. Also, the desired no-fly zone by the Turkish party and the fate of the "Sham Liberation Army" previously known as "Al-Nusra" were not discussed. This gives the Syrian state the chance to win the last round in the battle for control over the latest de-escalation areas in the country, and turn the page of the 9-year-old conflict.

Russian and Turkish Gains from the Agreement

1. Moscow succeeded in bringing Ankara, a member of NATO, to its side, albeit temporarily.

2. Moscow has achieved its goal to control the Aleppo-Damascus International Road "M5" with the Syrian army, which was not mentioned in the Kremlin summit outcomes.

3. In the end, Moscow rearranged the game cards on the ground between its allies, Syrians, and Iranians, in exchange for maintaining its strategic partner, Ankara.

Although Ankara lost the areas controlled by the Syrian army and failed to achieve its goals to establish a safe zone which it bore painstaking efforts and heavy losses to achieve, it succeeded in:

1. Containing the voices of the internal opposition rejecting the Turkish role in Idlib, with its pretext of losing members of the Turkish National Army in those battles, especially since the Justice and Development Party suffers from internal crises and less popularity manifested in its loss in more than one municipal elections in major cities during 2019.

2. Stopping Russian advancement on the ground; if the military confrontation continues, Ankara losses, which are the loss of its gains on the ground, and its strategic relation with Moscow at various levels will be multiplied.

The Future of the Agreement

Despite Turkish and Russian presidents’ assertion that a military solution will not contribute to ending the conflict in Syria, and that "the only solution is a Syrian-led, Syrian-owned political transition, in a manner consistent with Security Council Resolution 2254” and despite the ceasefire in the agreement, neutralizing the human element in the political conflict and paving the path for the return of the refugees to their homes, the ambiguity of the agreement as well as lack of content on relating issues put forward the option of escalation in the near future. This comes in light of Turkey maintaining the right to respond to any breach by the Syrian army, and its adherence to the need to establish the safe zone to mitigate increased refugee movements, in addition to deploying more forces in Idlib, and its repeated responses to strikes by the Syrian army.

On the other hand, Russia will continue to invoke "terrorist groups", particularly the "Sham Liberation Army" and will justify any future fieldwork by its forces as necessary to eliminate these groups, according to the terms of the recent agreement.

The U.S. stance is also an important determinant of the continuity of the agreement, as Washington revoked its negative stance by seeking to hinder the efforts of the Russian permanent representative to the United Nations, Vassily Nebenzia, to obtain a declaration from the Security Council in support of the Turkish-Russian agreement in Idlib, as Washington considered that "it is premature", as observers expect Washington to remove the "Sham Liberation Army" from the list of terrorist organizations with the aim of re-igniting tensions between the two parties in Idlib. Washington is also striving to discourage Ankara from purchasing the Russian defense system "S-400"; indicating that Turkey cannot ally with the U.S. and Russia at the same time.

In conclusion, the agreement appears to serve as a temporary measure to preserve Turkish-Russian relations instead of a final settlement to another file, “de-escalation zones in Syria”; this sustains the agreement’s viability and flexibility dependent on some future developments, such as more serious stances by Turkey’s allies - especially the U.S. and NATO -, or reaching consensus on the Libyan file among Russia and Turkey.