THE MUSLIM BROTHERHOOD: ANALYZING THE PROBLEMS OF ATTITUDE TOWARDS EXTREMISM AND TERRORISM

THE MUSLIM BROTHERHOOD: ANALYZING THE PROBLEMS OF ATTITUDE TOWARDS EXTREMISM AND TERRORISM

This opinion article contains many historical and contemporary evidence that document the structural and ideological connection between the Muslim Brotherhood and terrorist organizations, by analyzing the elements of their relationship at multiple levels of emergence, discourse, approach, and strategies.

The relationship, between the Muslim Brotherhood and the terrorist and extremist organizations, is one of the problems proposed nowadays, which rise a wide spectrum of inquiries, especially after the developments "the Islamist Phenomenon" witnesses through significant historical stages, started with the domination of political Islam over the Iranian Republic after toppling the Shah in 1979. At the same time, the Afghan War started between the Afghan fighters and the so-called "Arab Afghan" on a hand, against the "USSR" on another hand. This war had titles of "Islamic Jihad" facing "Communism and atheism". Then came the emergence of al-Qaeda, and executing the attacks of 9/11. And then, the rise of ISIS organization indifferent levels in Iraq and Syria, expanding in Europe, south-east Asia, and east of Africa.

The rise of the terrorist organizations, like ISIS and al-Qaeda, and their ability to employ the technological aspects and internet services, led such organizations to enhance their abilities of polarization, recruiting, training, and logistic support, dominating finally the Islamist landscape over political Islam groups. The latest had dealt with the "Salafist Jihad" wave via two stages:

SECOND: this point is resembled in the so-called "Arab Spring" in the light of the chaos and terrorism increase, in addition to the return of "mosque and tribe" references, which were salient in resisting occupation. In spite that this stage did not propose "Islam is the Solution" slogan.

Accordingly, political Islam groups take no long time to come to the office in some Arabic states. Until they had fallen due to their incapability to renew, including separating "the call to embrace Islam" and "the political affairs" besides their insufficiency in presenting real solutions for a set of economic issues and crises, as well as their view concerning democracy and "the other". 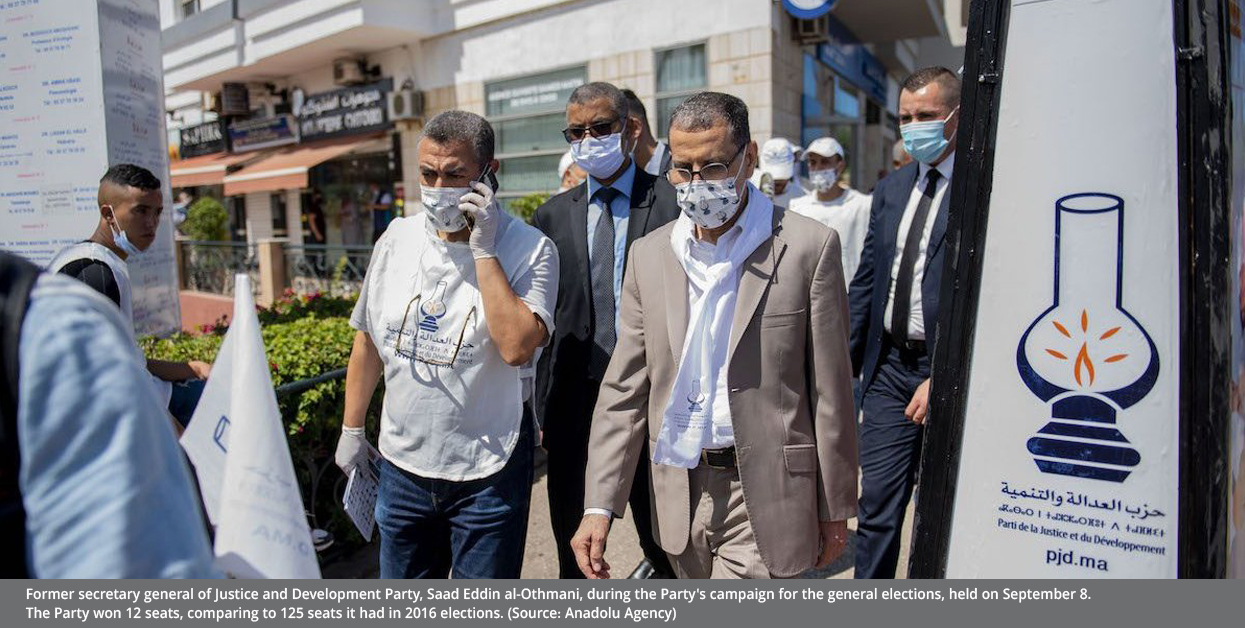 Muslim Brotherhood and the Intellectual Roots of Terrorism

For the first sight, it was thought that the relations between the aforesaid parties are limited to the thought and discourse. But many evidences and indications became confirming the direct involvement of the Muslim Brotherhood in terrorism. Especially that the levels of systematic congruence between them and the terrorist groups are up to the level of similarity and harmony, specifically in how to change and reform, which depend on that "the Nation would not be liberated or ruled by the Islamic Sharia except via changing the man-made systems, which rule in otherwise to what God sent to us".

This methodology is expressed in the letters of the Muslim Brotherhood, Hasan al-Banna, with sayings like "reaching the power is a pillar of Islam, just like prayer and Zakat" and "the right of the Muslim Brotherhood to wage a relentless war against any ruler who does not rule in what God ordered". This idea was manifested by the terrorist organizations, including fighting the far and near enemy, the matter which was among the reasons ISIS defected al-Qaeda.

Analogous to the ideas of Hasan al-Banna, the approaches of Sayyid Qutb seem to be the most affecting in establishing terrorism and extremism. Especially what was said in his book "Milestones" where he confirmed that "every land that fights the Muslim in his doctrine, pushing him back from his religion, and halts his sharia, is a land of war, even if it has in it his family, clan, people, and money" and his sayings about "the rule of God and the Jahelyya[1]  of society".

Such ideas became of the main tributaries which established takfir, and the main reference for the discourse of jihad main figures like: Abu Muhammad al-Maqdisi, Abu Qatada al-Filistini, Abu Musab al-Suri, in addition to Obama Bin Laden, Ayman al-Zawahiri, and Abu Bakr al-Baghdadi, which all focused on the approach of "two camps: the camp of belief, and the camp of infields" fight the polytheists, declare loyalty and disengagement, and others.

Muslim Brotherhood and the Approach of Establishing Secret Organizations

The references for establishing secret terrorist organizations, that conduct military exercises, including training on weapons, and making explosives, have been closely related to the Muslim Brotherhood, since it was established by its founder, Hassan al-Banna, when he founded the so-called "Special Organization" in 1937, headed by member Abdul Rahman al-Sindi. This organization was a secret military organization that carried out several assassinations, including the operation targeting The Egyptian Prime Minister, Mahmoud al-Naqrashi, and Judge Ahmad al-Khazindar, after a campaign of incitement against them by Hassan al-Banna himself.

Muslim Brotherhood and Terrorism After 2011

The Muslim Brotherhood dealt with the results of the so-called "Arab Spring" upon to a strategy that includes achieving the goal of reaching power, based on the idea that all trends in ruling were tried, and that the opportunity is ready for the Brotherhood to come to power. Western estimates - American and British – reinforced this, providing support to the Muslim Brotherhood, as an organization that constitutes an objective alternative to political regimes and terrorist organizations, preventing the realization of scenarios of chaos and unrest.

Accordingly, the Muslim Brotherhood has taken a new approach, which includes providing the necessary requirements for reaching power, while maintaining the group's position and gains among supporters of political Islam, in light of the rapid spread of rhetoric by terrorist organizations, leading it to continue its extremist discourse.

While security investigations confirm the Muslim Brotherhood's relationship, in Tunisia, with the assassinations of Chukri Belaid and Mohamed Brahmi, and providing facilitations for the travel of more than 3,000 members to fight with ISIS in Iraq and Syria. The Muslim Brotherhood in Libyan participated in forming military groups in western Libya, which have alliance and otherwise conflict relations with Salafist jihadist organizations. The Muslim Brotherhood engaged in armed action in Syria, through forming armed battalions, including the Revolutionary Shields Authority and al-Farouk Brigades in Homs, Unification Brigades in Aleppo. In addition to form armed groups in Idlib such as The Mountain Shield. Simultaneously, the Yemen Muslim brotherhood seem to be intertwined and complex relations, ranging from the military cooperation with the Houthis, and another {alliance} with terrorist organizations, including al-Qaeda.

The Muslim Brotherhood and their contradicting media discourse towards terrorism

The Muslim Brotherhood mass media strategy, on the level of the international organization and the affiliating organizations, is based on adopting two discourses:

External: Expressed during official meetings with Western bodies, embassies, and study centers. It has ideas that conform to the requirements of the West, including that the Muslim Brotherhood condemns extremism and terrorism, believes in democracy and ballots, respect minority rights and women's rights.

Domestic: Focuses on the grass roots of their countries, in tandem with the titles of at extremism, terrorism, and the promotion of hatred. Moreover, the Muslim Brotherhood discourses in different arenas correspond to the discourses of terrorism organizations leaders . in addition, the Muslim Brotherhood's discourse has contributed in the legalization of terrorist behaviors, by justifying violence, linking its causes to political systems, without any condemnation of terrorist operations on their media platforms. Perhaps the most prominent example on the foregoing is that 4 MPs from the Islamic Labor Party in Jordan, paid their condolences when Abu Musab al-Zarqawi was killed by the US forces in Iraq, where former MP Mohammed Abu Fares described him as a "one of the mujahedeen, and martyr". 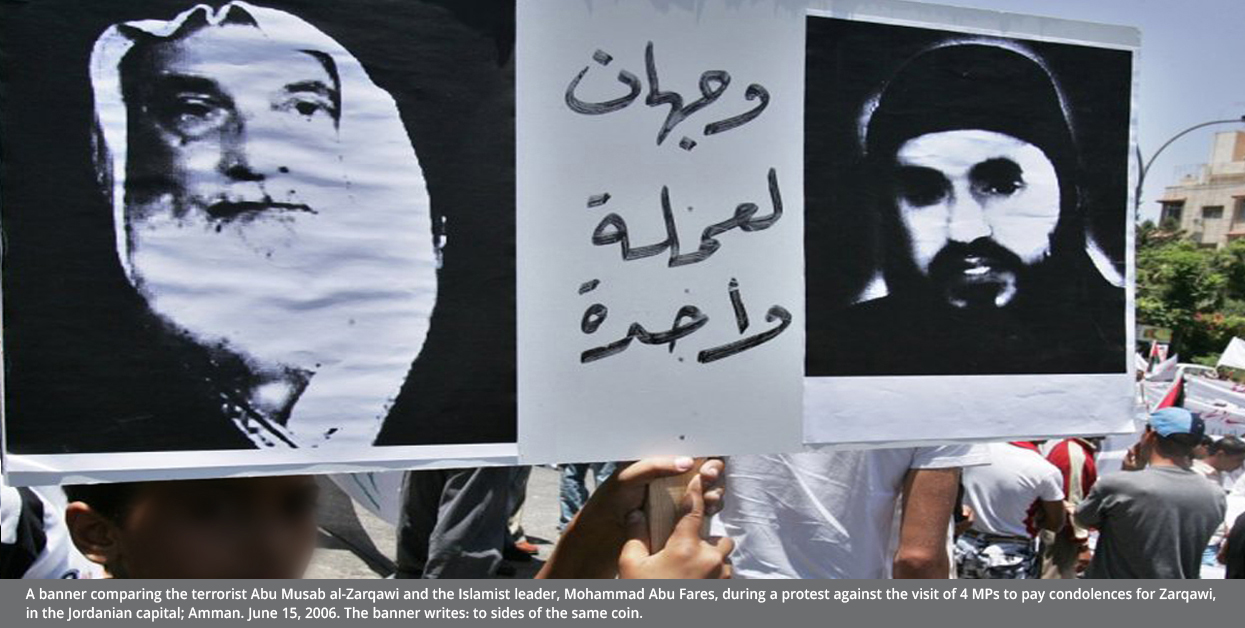 This contradiction, in the Muslim Brotherhood's media discourse, is arguably under investigation in many security services of European capitals, which explains the security campaigns and investigations conducted with the group's leaders in multiple European capitals. The accusations range from involvement in terrorist operations, up to providing multi-level logistical support to terrorist organizations, through relief institutions and Islamic centers, that have proven the Muslim Brotherhood's role in sponsoring and investing in terrorist services.

The Muslim Brotherhood is facing a number of serious challenges. Most notably, their relations with extremism and terrorism, as well as other files related to the Muslim Brotherhood's ideology, and what that means in terms of losing the ability to provide approaches to deconstructing historical problems, associated with the distinction between "the call to embrace Islam and politics". This is the same problem manifested in defects inside the Muslim Brotherhood at the level of international organization and sub-organizations, and the growing competing wings within the group in some countries.

[1]   Jahleyya: the name pre-Islam era was named. It means (attributed to ignorance and bad deeds"

The opinions expressed in this study are those of the author. In no way does Strategiecs take responsibility for the views and positions of its author on security, economic, political, social, and other issues, and such views and/or positions do not reflect those of Strategiecs.