The Future of the World's Energy Resources

The Future of the World's Energy Resources 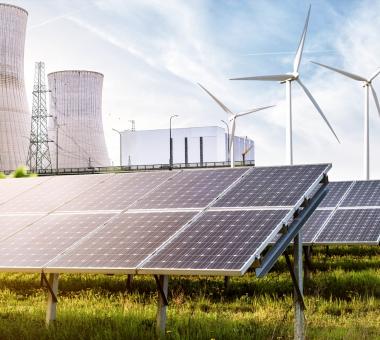 The world now is in search of alternative energy resources to the traditional and already discovered ones, seeking to exploit them in economic development, technological advancement, and an arms race.

Such efforts are exerted for two reasons; the first is the widespread notion of the depletion of existing energy resources, while the second reason is climate change and global warming, which resulted from the first reason.

The world has previously relied on fossil fuel resources, including oil, natural gas, and coal. Due to their importance in determining power and gaining control, several countries around the world have been competing over the domination of energy resources, seeking to take advantage of these resources in various aspects.

Non-renewable energy resources include oil, natural gas, and coal, which are known as fossil fuel. The global demand for oil rose by 1.6% (i.e. 1.5 million barrels per day), while natural gas rose by 3%, and coal by 1% in 2017. Such an increase was due to the rapid growth of the world’s population and the subsequent higher consumption of energy in the industrial sector, factory operation, transportation, household heating, and electricity generation, in addition to the rising competition among the major industrial countries such as China, the U.S., Russia, Germany, and France.

Unlike traditional energy resources, renewable energy, such as wind and solar energy, is inexhaustible and not exclusive to certain countries, besides being environment-friendly with no toxic emissions like carbon dioxide.

While the world population is growing and the competition among countries across the world is rising, the fossil fuel reserves remain unchanged or they even decrease compared to the past decades. Therefore, the world has shifted to search for alternative and renewable energy resources on which they can rely and use in various fields, prompting several countries to fund and invest in renewable energy applications.

The world invests around $11.5 trillion in renewable energy and its related technology, seeking to utilize solar and wind energy as well as bioenergy in production and manufacturing, vehicle fuel, and the generation of electrical power.

By 2050, it is estimated that 50% of the world’s electricity will be generated from wind and solar energy, while only 29% will be from fossil fuel.

Renewable energy resources, including solar and wind power, rely on the technological advancement of battery manufacturing, which is the backbone of renewable energy sources to store energy. The storage capacity of batteries can reach 1.291 GW by 2050 in order to be used in the industrial and production sectors as well as for electric cars.

Such a technological development that would enhance the battery capacity in storing energy is expected to contribute to increasing the sales of electric-powered vehicles from 1.8% to 40% by 2050.

The Future of Energy Resources

The world population is witnessing an increasing growth and is expected to exceed nine billion by the year 2040. Meanwhile, economies are growing on one hand, and the conflicts between the superpowers are intensifying on the other hand such as the trade war between the U.S. and China. The two countries are among the top consumers of energy worldwide with consumption of power that is expected to reach 4,319 Mtoe in China and 2,299 Mtoe in the U.S. by 2020.

These factors prompted both countries to compete over acquiring energy resources in order to enable strengthening their economies as the world’s major powers. On the other hand, the U.S. and Russia are competing at the political and military levels to control the rest of the world, particularly countries rich in oil and natural gas reserves such as the Arab countries which own 55% of the world’s oil reserves.

Despite the increase in demand, the oil share in energy consumption is predicted to drop by 27% by 2040 for political and technological factors that include reducing oil production in countries that have oil reserves due to the decline in strategic oil reserves such as the case in Arab countries, especially of the Gulf Cooperation Council, in addition to the technological advancement of power-saving industrial machinery and equipment.

Meanwhile, the global demand for natural gas will increase to 100 billion cubic meters by 2040 compared to 2017, marking a growth rate of 147%. It is because the world now tends to depend on natural gas for generating electricity in factories and manufacturing rather than oil and coal, on which global demand is expected to decline by 3% and their usage would be limited to factories.

Among the traditional energy resources, the world tends to rely on natural gas in the first place due to its low production costs and its lower environmental pollution and carbon dioxide emissions, which are the main causes of global warming and climate change. This prompted countries around the world to resort to environment-friendly alternative energy resources such as renewable energy (solar energy, wind power, nuclear energy, hydropower, and bioenergy).

The world is shifting towards renewable energy resources in the future to minimize the reliance on traditional energy resources like oil, natural gas, and coal. The generation of electricity from renewable energy resources is expected to increase by threefold i.e. equivalent to 1,100 Mtoe by 2040, marking a 40% increase. This can be used in the transportation and the electric applications sectors. It is noteworthy that China is one of the largest consumers of solar energy in the first place, followed by bioenergy, which witnessed an increase of 7 Mtoe in demand, followed by wind energy and hydropower.