The paper tackles the impact of NATO expansion after Finland and Sweden submitted applications to join it on the concepts of neutrality and the changes that affected its role in establishing security and stability for the European continent. It examines the geopolitical and strategic repercussions on the various parties (Russia, Europe and the Atlantic).

Whatever the upcoming scenarios about the outcome of the Russian military operations in Ukraine, how and when they will end, there is no doubt that there are several repercussions of this crisis. At various levels, it will have a profound impact on the structure of European security, the balance of power, and the concepts that have been stable in the continent for decades, foremost of which is the "concept of neutrality".

After the crisis, he European security system will not be the same, whether with regard to collective security arrangements, or the continent’s awareness of its future security requirements, or in the nature of transatlantic relations in terms of the United States’ role in European security, and Washington and Europe’s view of this role and its limits.

Within this context, this analysis discusses the impact of the NATO expansion to include both Sweden and Finland on European and global security.

The erosion of neutrality in Europe

On 18 May 2022, Finland and Sweden submitted an official request to join NATO, abandoning the policy of neutrality that the two countries had been committed to for decades. This request received a great European welcome, while Turkey opposed it, claiming that Sweden is harboring its opponents from members of the Kurdistan Workers’ Party, which is classified by the European Union, the United States and Turkey as a terrorist organization. Ankara also calls on both countries to stop the arms embargo imposed on it since 2019 after its military operations in the north Syria.

In the same vein, Croatia opposed this request, until the electoral law in Bosnia and Herzegovina is amended to facilitate the election of Croat representatives to government positions in the aforementioned country.

It is noteworthy that the two countries submitted a request to join NATO, in accordance with the “open door” policy, in Article 10 of its charter, which allows any European country to join it, an article that Russia insists on removing as part of the security guarantees provided by NATO, Europe and the USA.

The concept of neutrality is one of the concepts mentioned in the context of conflict resolution and achieving peace and stability, especially in disputes and competitions between major powers. “Neutrality is the legal situation resulting from a state’s refusal to participate in a war with other states, while maintaining a position of neutrality towards belligerents, and the acknowledgment by belligerents of this reluctance and impartiality. This concept is critical to the UN, through which it gains trust and cooperation of all parties to act independently and effectively, particularly in situations involving political escalation," according to the United Nations definition.

Many countries in the world are still committed to being neutral, such as Ireland, Austria, Switzerland, Moldova, and Turkmenistan, which are registered as neutral countries in the United Nations.

Despite the advantages of neutrality in sparing countries the consequences of any conflict or dispute across them or on their borders, many questions are raised about the motives of both Finland and Sweden to abandon their historical neutrality at the present time.

In fact, the two countries provide various reasons for this transformation:

First: The change of the security and geopolitical environment after the Ukrainian crisis, as Finland has a long land border with Russia and is now threatened by a similar attack. As for Sweden, it does not have a direct border with Russia, but it possesses the island of Gotland. This island is about 330 kilometers from the border, within Russia's strategic scope in the Baltic Sea, and it is Sweden's only outlet to the North Sea.

Third: Field facts indicate that Russian military operations in Ukraine may be prolonged, and that Moscow’s focus during the next stage will be on restoring the security balance in its geographic and vital surroundings. This illustrates the need of the two countries to join NATO, in light of ensuring that Russia today is unable to fight on other fronts.

Fourth: The two countries are located near the North Pole, which is witnessing several rivalries between the major powers that are likely to intensify due to the effects of global warming and the accompanying retreat of ice, in a way that has made it possible to exploit its huge resources and wealth. Estimates indicate that the North Pole contains more than about a quarter of the world's oil reserves.

Fifth: From a practical point of view, Finland and Sweden have a prior association and engagement with NATO, through their membership in the Euro-Atlantic Partnership Council, and through the participation of Finnish forces in peacekeeping efforts in Afghanistan and Iraq under US command, as well as the two countries’ role in European expeditionary forces. Thus, the two countries' military infrastructures are in line with NATO standards.

If the NATO overcomes the objections of some of its members (Turkey and Croatia) and the two countries join the NATO, this paves the way for a new European security structure with large and changing geostrategic dimensions, through:

First: Widening the ring around Russia

If the two countries join the NATO, Russia will be surrounded by a sixth European Atlantic country, in addition to Latvia, Estonia, Lithuania, Poland, and Norway. This will have an impact on Russia's vital and geographical surroundings and its level of effectiveness in European security. This will also restrict its access to the warm waters that are vital to it.

Second: Control of the Baltic Sea

The accession of Finland and Sweden means that all the countries bordering the Baltic are members of NATO (with the exception of Russia and the Åland Islands), which gives the alliance greater control and influence in the Baltics in a way that enables it to exert greater pressure on Russia within its strategic regions.

Third: Increased chances of friction between Russia and NATO

With the accession of the two countries, the chances of military friction between Russia and NATO will increase; for the latter will add about 1,300 km of the mutual land border between Finnish lands and Russia. Thus, it will double the length of its borders with Russia from 708 to 1931 km. In return, Russia intends to build 12 military bases along its border with Finland. 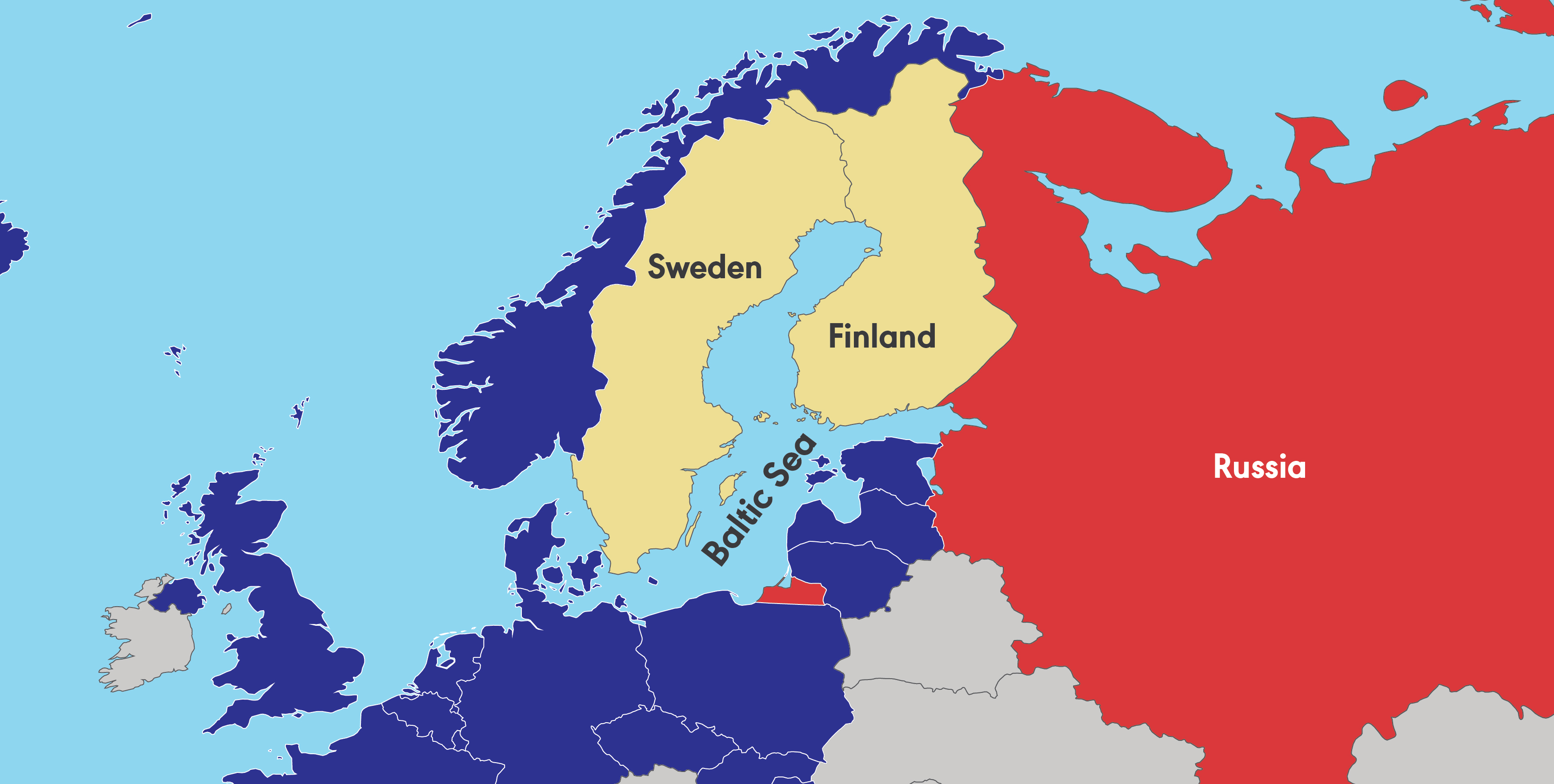 Fourth: The repercussions of attempts to weaken Russia

Despite the welcomed accession of Sweden and Finland and the expansion of Western sanctions against Russia, Western voices have begun to warn of the coming repercussions. They consider that weakening Russia may push the European security into more dangerous directions.

The statement of French President Emmanuel Macron was among these calls, in which he stressed that security and peace in Europe cannot be achieved by “humiliating” Russia. Former US Secretary of State Henry Kissinger indicated in the margins of the Davos Forum in Switzerland, “it would be dangerous for the West to plunge into the mood of the moment and forget Russia's position in the European balance of power."

These warnings are based on two main premises:

1. Russia has a historical role in ensuring the security of the European continent. It is an integral part of the European security system, in addition to the pressing European need for Russian energy resources.

2. Historical experiences indicate serious repercussions of the “humiliation” of other countries. Germany’s humiliation in the settlements approved by Versailles Conference in 1919 after the end of World War I created the conditions for the emergence of Hitler and then the outbreak of World War II.

Russia was insulted by the West's dealing with it after the collapse of the Soviet Union, and its failure to fulfill its pledges not to expand NATO to the east. This led Putin to restore Russia's dignity through violent policies toward Georgia, Ukraine and toward NATO expansion in general.

Russia has a set of options if Finland and Sweden are accepted into NATO, especially since Russian President Vladimir Putin has said that his country will not stand idly by if this accession takes place. Perhaps the most important of these options are:

First: The Warsaw Pact in a new format

The expansion of NATO on the Russian borders, as we mentioned earlier, would prompt the latter to redefine the role of the Collective Security Treaty Organization, which includes a number of the former Soviet Union republics: Russia, Armenia, Belarus, Kazakhstan, Kyrgyzstan and Tajikistan. Russian President Vladimir Putin indicated at the group’s summit held on May 17, the member states will soon conduct joint military exercises, as well as calls at the meeting to transform the treaty into an alliance similar to the former Warsaw Pact.

In the same context, Russian Foreign Minister Sergei Lavrov stressed the importance of the Collective Security Treaty Organization –CSTO- as a factor ensuring balance in the Euro-Atlantic region. He added that his country considers that the organization is capable of "deterring NATO's control" in the region. 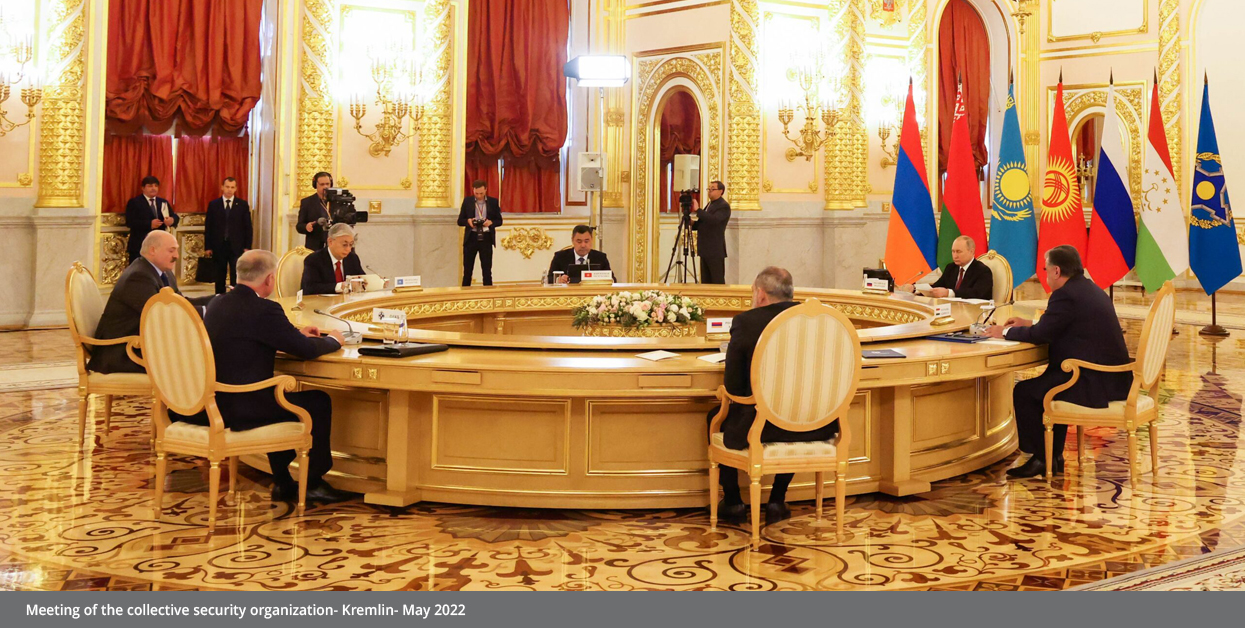 In return for the expansion of NATO, Russia seeks to expand its areas of control and influence, after recognizing the independence of the Donetsk and Luhansk republics, with the possibility of their annexation to its lands. Similar to what happened in the Crimea in 2014, along with the request of South Ossetia, which separated from Georgia in 1990, to join Russia. Its President Anatoly Bibilov signed on May 15, 2022 a decree to hold a popular referendum in his country on July 17, 2022 on his country's accession to Russia

Third: Heading towards the East

As a result of the Ukraine crisis and NATO’s tendency toward expansion, Russia re-orientated towards the Asian side, as three-quarters of its area is located in Asia. This means more alliance with China in order to formulate a new economic, political and security world order, which may negatively affect the power of NATO.

Russian-Chinese relations witnessed remarkable progress in the days prior to the Ukrainian crisis, as President Vladimir Putin was the first leader to meet with Chinese President Xi Jinping, after the Covid-19 pandemic. The two countries signed an unlimited partnership agreement, and last May, the Russian and Chinese defense ministries announced launching joint air strikes over the Pacific Ocean, with the participation of "an air group consisting of Russian strategic missile carriers and Chinese strategic bombers that patrolled over the waters of Japan Sea and the East China Sea," according to the commander of the Russian Air Force Sergey Surovkin. These maneuvers and patrols coincided with the meeting of the quartet group "Quad" in Tokyo, which includes the United States, Japan, Australia and India.

In light of the above, it can be said that the way the West deals with Russia in light of the Ukrainian crisis will have many repercussions on European and global security in the coming years, especially with regard to: