Technological Competition: Beijing vs. the West

Technological Competition: Beijing vs. the West

Technological development in the field of communication networks and technologies in general is one of the most prominent issues of interest to the central capitals of the world, because of its future importance in the possibility of redrawing the influence of a major country at the expense of another in the military and economic fields. The article explores the highlights of the technological competition between the Western countries and China, with explaining the most prominent aspects of this competition in the near term. 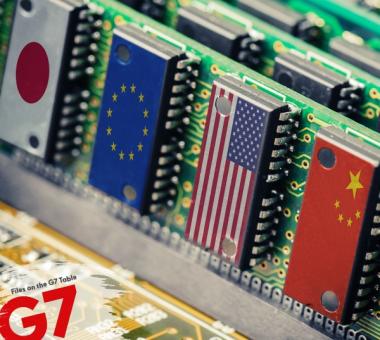 *This is the fifth article in the series being published respectively in the “papers on the G7 table” file.

Although a U.S-China trade agreement was signed in January 2020 as a lull of the trade war that has erupted between them since March 2018, the U.S. attitude toward the Chinese technology companies and their activities in Western countries in general has not changed; on the pretext that these companies spy on European and American citizens through their economic presence, which the U.S. administration considers as a threat to the national interests of the state that allows it.

Competition for the development of G5 networks is the main focus of the U.S. campaign against Chinese technology companies, as China's “Huawei” is technically superior in this field globally, and this makes Beijing one step ahead its Western counterparts in the military and economic fields,  as this revolutionary new generation of telecommunication networks can achieve qualitative leaps in various fields.

Companies such as “Qualcomm”, “Nokia”, “Ericsson”, “Cisco Systems”, and others have been able to acquire the G”5” technology; however, they lack the infrastructure and operational tools of this technology, to some extent. Furthermore, transmitters and receivers within a G5 network, which will be manufactured by the companies mentioned, will be more expensive than their Chinese counterparts, which means their competitiveness in the market will necessarily be reduced.

“Qualcomm” estimates that G5-related activities will reach about $3.6 trillion by 2035, in addition to providing nearly 22.3 million jobs. Such figures among others make the race for developing and operating this technology highly important economically and socially, and they deepen the dispute over electronic primacy between China and Western countries.

Within the trade dispute between Beijing and Washington, there is a dispute over all the terms of the technological development file in the areas of artificial intelligence, the Internet of Things, the semiconductor industry, social networks, manufacturing supercomputers, and the militarization of space. The current U.S. administration's unilateral reformulation of global trade rules has accelerated the race to develop various technological fields that will give its monopolist the upper hand on several issues, starting with maximizing global influence through expanding investments, and going beyond the development of military capabilities.

In general, the European Union has not succeeded in imposing itself in the current competition between the United States of America and Asian countries (China, South Korea and Japan), particularly in the area of electronics and ICT, resulting in significant expenditure on the import of technological equipment from those countries, at the expense of supporting public services such as infrastructure, education and medicine. In addition, this threatens the future inability to keep pace with new patterns of manufacturing, which are essentially based on advanced technology. The Union’s institutions are not oblivious to this, and they admit this delay; as evidence, the European Commission, headed by Ursula von der Line, is seeking to launch a renewed industrial strategy, in which €3.2 billion has been allocated to support research and development in the battery industry, as part of the EU's search for commodity privacy in the era of highly complex “technology”.

On 14 July 2020, the British government decided to ban "Huawei" from working in the UK, preventing it from participating in the development of "G5" technology, in addition to obliging British companies to dispose of all equipment supplied by Chinese companies. Australia took a similar step in August 2018, and here it shows in one way or another the impact of Washington's rhetoric calling for unifying efforts against Chinese supremacy.

In July 2020, the European Commission also announced that “Nokia” and “Ericsson” are ready to provide the EU with the G5 infrastructure in case of any "security" imperative to abandon Chinese companies as a major supplier of “G5” technologies. This announcement can be understood as a European threat to the possibility of abandoning Chinese investments, as London has done.

This may be based on the "Open Ran Policy Coalition" alliance, which was established in May 2020, and included more than 30 European and American companies specializing in programming, communication technology and broadcasting systems. This alliance aims at finding an alternative to “Huawei” for European countries and the United States.

As a response, in December 2019, the Chinese government announced they have started to replace all its computers and operational programs in government institutions with home-made ones, in reaction to the inconsistent dealings with world trade rules and the free movement of investments towards Chinese technology companies. This is why the latter is looking forward to achieving self-sufficiency of all foreign goods involved in the development of Chinese technology, which, the development process, in this context, is part of the "Made in China 2025" strategy launched by the Chinese authorities in 2015.

As a preliminary conclusion and based on European "concerns", Washington rejects the Chinese technological investments, which led Beijing to search for other countries and regions of the world that would embrace the Chinese investments, and gradually secede from free trade concepts. Therefore, this will serve as a scattering tool of any efforts aiming at concentrating and consolidating efforts within a joint and international framework to develop this important and futuristic sector, the technology sector in its various fields.

Even at the level of Chinese applications and social media websites, the U.S Administration fears that “TikTok”, a short videos exchange application owned by “ByteDance”, and “WeChat”, a chat application owned by “Tencent”, could be "espionage activities". President Donald Trump has issued an executive decree banning financial dealings with these two applications in the United States after 45 days of negotiations between representatives of the Two Chinese companies on the one hand and the American “Microsoft” on the other. These negotiations would lead the latter to receive the ownership of the two businesses, including the two applications mentioned above, in the United States of America, Canada and Australia, through a deal valued at $30 billion.

In April 2019, social media giant “Facebook” announced the launch of its digital currency, Libra, to facilitate the transfer of money between individuals, benefiting from a base of hundreds of millions of users around the world. However, the project has been met with official opposition by U.S. executive and legislative institutions, preventing it of becoming a reality.

The Libra project cannot be considered to have failed, but it certainly has a trouble coordinating with public and private institutions which are central in controlling the U.S. monetary and fiscal policy, such as the Treasury Department and the Federal Reserve. If this coordination problem is not out of the question, and in case of not reaching an understanding that employs the critical capabilities of U.S. technology companies in the monetary field, the next scene can be summarized as follows:

The United States will be lagging behind in the race of being a leader in the digital money domain for other countries such as China, which has already launched its digital currency in May 2020, while the world has been busy ever since in the fight against the emerging Corona virus .The Central Bank of China has a monopoly on issuing the currency based on a well-developed local and regional base of electronic payment system developed by: the e-commerce giant “Alibaba” and the leading IT company “Tencent”. The European Central Bank and the Bank of England have also announced that they are considering issuing a new digital currency in coordination with other central banks in Japan, Sweden and Switzerland.

Therefore, the longer the Libra currency takes to be issued, the harder it would be to impose itself strongly, because of the several other options distributed between cryptocurrencies and officially-issued currencies.

After this brief presentation, it is clear that the G7 countries have a very thorny file on the development of the technological map in the world as a whole, which will have the final say in determining the "mechanics" of socio-economic production, and the subsequent political and cultural lever. Will cooperation with Beijing in the field of technology give the people of the world an opportunity to find an agreed-on "technical formula”?

The answer to this question is determined in favor of the U.S. opposition at least, which is not necessarily agreed-on by all countries within or outside the G7.