This report serves as the opening paper for “Files on the G7 Table”, in which the research team will publish multiple headlines, addressing urgent strategic issues at the regional and international levels, examining current international organizations’ ability to respond to major crises, including the outbreak of the novel-Coronavirus, and assessing G7’s strength, in its current form, to overcome multiple challenges. 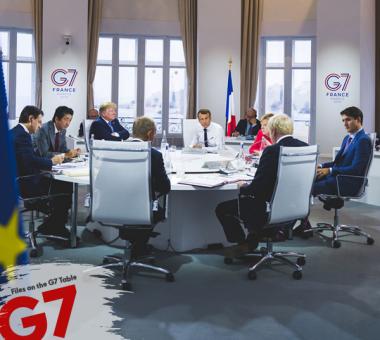 U.S. President Donald Trump has announced that the G7 Summit will not be held in July 2020, and will instead take place in September 2020; this is due to the preventive measures taken to limit the outbreak of the novel “Coronavirus”. This postponement, however, is not the only change that happened in this season’s Washington-held summit, as Trump suggested expanding the list of participating countries, including Russia, India, South Korea and Australia.

If the summit is held with its new guests, this “temporary” expansion will be the largest since the Group was founded in 1975 with 6 members, namely the U.S., UK, France, the Federal Republic of Germany, Italy, Japan, and Canada, which joined the international organization a year later.  Initially, the G7’s objective was to allow the world’s largest industrialized and democratic economies to exchange ideas and possible solutions for global economic crises, at a time when the international system has split into two ideologically-conflicting poles: A Western Capitalist and an Eastern Communist.

Most of the current international organizations are the net product of the post-WWII phase; these organizations were founded to counter challenges that differ from those prevailing in the current circumstances. Hence, these entities are not capable to counter contemporary challenges, unless they develop their framework and administrative structure. Should they fail in this mission and are unable to adapt to developments, new organizations will fill the void and advance to the fore; as the saying goes, “if you do not move forward, you move backward.”

In a relatively old study published in September 2005 by the American Political Science Association, titled “Why International Organizations Will Continue to Fail Their Development Goals”, the overview showcased the poor effectiveness of certain organizations, namely the World Bank and the International Monetary Fund, in reducing global poverty rates. In this regard, the study suggests that the increase in the number of member states and the different goals undermine the ability to formulate an agreed-upon and implementable strategy. Moreover, the study reaffirms that political leaders in some countries disregard and neglect good governance standards which entail a disciplined public policy that can be practiced transparently before the electorate.

This 15-year old study presents a pessimistic scenario, in which it assumes that the effectiveness of the existing IO’s in achieving the desired goals will decline unless they fundamentally reform their “Modus Operandi”; this is by reducing the number of operations conducted and instead, directing their efforts towards qualitative aspects. The study also criticized the emphasis on mission inputs at the expense of its outputs, like focusing on loans instead of poverty reduction.

As for industrialized G7 countries, it seems that what the study predicted has been achieved; political contradictions among member states undermined the ability to reach an initial agreement on vision and goals related to the international economic system. It goes without saying that this organization’s political identity is ambiguous, making it difficult to pinpoint a general political trend among its members.

After the suspension of Russia’s membership of the G8 group following its annexation of Crimea in March 2014, and instead of G7 agreeing to face the Chinese- Russian political threat, the gap widened until the dispute became about the guidelines for the international economic system. The dispute is no longer limited to details only.

Accordingly, it can be said that the aforementioned gap reflects a disagreement on capitalist ideology with one trend that demands seamless and effective flow of goods and capital around the world without excessive customs regulations, and another that seeks protectionist policies to advance their national and popular interests. Besides, there is an ongoing dispute on freedoms, human rights and democratic values; such intellectual divisions, whether at the economic, social or political levels, hinder the ability to achieve the Group’s goals. Thus, the current G7 can be said to suffer from a “systemic failure”.

In her response to a press question regarding the proposal by President Trump to hold the G7 summit in-person rather than remotely, German Chancellor Angela Merkel alluded to the said in-depth failure, as she stated in May 2020: “whatever form the G7 meeting takes, whether it’s a video conference or otherwise, I will definitely fight for multilateralism, that’s very clear, both in the G7 and the G20.”

With the growing awareness of the state of systemic failure in key international organizations, there are more calls for radical reforms in these organizations as more are joining new organizations that are “parallel” in their goals with the current ones. For instance, OPEC countries cannot succeed in reducing global oil production unless there is coordination within “OPEC+” framework. The latter encompasses oil-exporting countries which emerged in the fall of 2016 as a response to the change in the traditional rules of supply and demand that regulate energy markets. In the same vein, the G7 group can presumably expand to become “G7+” to increase the efficiency of the current organization.

BRICS countries- an acronym for member countries, namely Brazil, Russia, India, China and South Africa- seek to exert influence on the global economic decisions, as the published data on BRICS summit website for 2019 showed that production of member states constitute 23% of global GDP and 19% of global trade. While the relative contribution of this organization to the global economy increases, the contribution of G7 countries diminishes. According to data published by the Council on Foreign Relations in August 2019, G7 countries constitute about 50% of the global GDP economy, compared to their 70% contribution three decades ago.

The political trend in this bloc is not ambiguous; in an article published in November 2019, coinciding with the G7’s 11th Summit, Russian Foreign Minister Sergey Lavrov described BRICS as one of the pillars in a multipolar world order.

The shift towards a multipolar world order is furthered by many countries shifting towards regional alliances with specific members and goals; this shift comes in place of the complex and wide globalization. There has also been a lack of consensus on a unified mechanism in addressing pressing issues and security threats, such as terrorism; the U.S. adopts an approach that differs from that of China or Russia.

In addition, the Security Council has witnessed an exchange of accusations among the five permanent members regarding the direct and indirect responsibility for some serious incidents, including the attack on oil tankers in the Arabian Gulf. Moreover, the council has been unsuccessful in settling certain ongoing conflicts, creating a void that is filled by certain actors to strengthen their presence in the international scene.

Unsurprisingly, new organizations have replaced existing ones that have failed to protect their basic principles. The United Nations, for instance, was founded at the end of World War II, after the League of Nations was deemed incapable of maintaining collective security or predicting World War II.

However, this replacement (new organizations taking place of the old ones) is not inevitable, as it does not necessarily guarantee solutions for emerging crises; it can perhaps cause temporary chaos that increases disruptions, rubbing salt into the wound. As such, the global elite suggests grassroots changes to major institutions and organizations, so that they can adapt to new circumstances.

In this regard, the World Health Organization is conducting evaluations of its experience in handling the “Coronavirus” crisis, which is considered the most dangerous to face humankind since WWII. Based on evaluations issued by governments and impartial experts, in May 2020, the WHO called upon countries to prepare for the “next epidemic” by investing in preventive health. This appears to be WHO’s implicit recognition of the necessity to conduct a comprehensive review of efforts to contain the virus and to assess the shortcomings accompanying the international response; this response must have been consistent and stipulated by an effective international organization that is responsible for coordination and early exchange of information, in cooperation with member and non-member states.

The proposal to hold an expanded G7 summit, which we previously called “G7+”, comes at a time when all global economies are devoting efforts to face the implications of the “Coronavirus” crisis’ on daily life in its political, economic, social and psychological dimensions. Moreover, STRATEGIECS research center has sought to highlight key strategic issues raised at important international meetings, for it is imperative to provide the Arab reader with objective analyses of emerging controversial files in the international relations field.

Regardless of the form in which the summit will be held, whether in its expanded version or not, these issues will remain on the table of global dialogues throughout the third decade of the 21st century which commenced with massive events; the killing of Qassem Soleimani, subsequent tension, the announcement of the Deal of the Century, and the novel-“Coronavirus” outbreak, which became a global pandemic. In addition, U.S.-China tensions have escalated over several files, including responsibility for the virus-outbreak, global trade, and “The Law of the People's Republic of China on Safeguarding National Security in the Hong Kong Special Administrative Region.”

Until early September 2020, the month in which the summit may be held in conjunction with the UN General Assembly, STRATEGIECS research team will publish a series of papers on key complex international issues, enlisted under “Files on the G7 Table.” These papers are not just mere forecasts of decisions, but rather an attempt to understand the nature of the overall relationship of G7 countries and their varying mechanisms in dealing with different international issues, examining the reasons behind this discrepancy, both political and economic.

*If you wish to receive "Files on the G7 Table" reports, you can subscribe to our newsletter, or follow us on social media.