“Social media have gone from being the natural infrastructure for sharing collective grievances and coordinating civic engagement to being a computational tool for social control, manipulated by canny political consultants and available to politicians in democracies and dictatorships alike.” This is how social media is described in a report – made by Oxford University’s Computational Propaganda Project and Graphika, social media analysis firm - on the employment of Russian semi-governmental entities of major social media platforms with the aim of interfering in the course of the 2016 US presidential elections. The following article highlights the role of social media in the 2020 elections and its decisive role in influencing the American electorate. 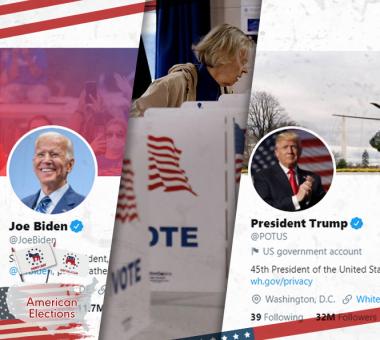 * This is the sixth and last article in a set of articles and papers published successively, discussing certain aspects of the internal and foreign dimensions of the upcoming US elections.

The United States of America is witnessing massive campaign advertising this year, as presidential elections are taking place along with elections for some seats in the US senate. This is as a result of the fierce competition in unprecedented circumstances, exacerbated by the outbreak of the novel coronavirus and the partisan and social division which has transformed social media into a "traditional" field of contest between the two camps, the Republican led by the President, Donald Trump, and the Democrat led by former Vice President, Joe Biden.

The KANTAR / CMAG, a Campaign Media Analysis Group, expects that spending on electoral campaign ads for this year will reach 7 billion dollars, of which 1.8 billion dollars on digital media, namely; social media platforms.

Social media has revolutionized political communication method. Campaigning and marketing election platforms no longer requires direct physical contact, since any Post or Tweet could achieve an interaction greater than what any supportive electoral gathering would achieve. Indeed, digital networking may be of a larger influence in terms of the ability to embrace feedback as well as the chance given to the media team who run the social media pages of the candidate to respond to questions raised.

Theoretically speaking, we can apply the Critical Theory on the role of social media platforms in the electoral process. The theory assumes that human groups form a "social totality" that shares values and perceptions of different issues, thus transferring its vision from the social sphere to the political through the political system whose leaders are elected from the various groups of the given state.

In fact, what social media have been capable of creating is the speed, high interactivity, and the connection they formed between users, thus enabling these groups to converge and build a totality of their own. Of course, this theory was not designed to modalize the electoral process, but it rather attempted at explaining the relationship between what is social and what is political in a local and international environment in which the course of events is uncertain.

In practice, social media plays an important role in guiding voters, especially those who are nonaffiliated and do not settle on a voting decision until late stages. Perhaps political advertisements through "New Media" will succeed in attracting those hesitant due to their simplicity and apparent neutrality. They are therefore "psychologically" more reliable than the traditional media, although most observers agree that social media is full of rumors and can be manipulated and engineered to influence voters into specified decisions.

In this regard, the boards of directors of these companies have always affirmed their commitment to maintain constant position in respect of everyone and that they are open platforms for direct expression of opinion, as they are "from people for people". Indeed, these platforms have become an accurate measure of the general climate and an important tool for public opinion making. Even though the classic definition of the legitimacy of political system, which is the basis of state sovereignty, is "from people for people", social media has come to represent a virtual legitimacy that is no less important than institutional legitimacy.

This does not mean that political marketing through these means is not risky, as any "slip" is directly broadcast and enters the "trend" of daily or weekly interaction turning into a material for mockery by the opposite party. A video of tens of seconds is enough for the consuming of valuable time to remedy its repercussions or the undermining of the credibility of a candidate’s proposal; since the spread of social media and the American interest in it have facilitated the launching of “counter-campaign" with the aim of ruining confidence in the rival candidate.

There are justifiable fears among the candidates - whether for the presidency or the legislative authority - of receiving negative interaction, which may exert pressure on the course of the campaign and increase tension. Therefore, advertising campaigns are carefully managed by specialized companies and according to a certain hierarchy that precedes the click of the publish button; for there is no room for any mistake.

It is evident, upon a glimpse at the page of US President Donald Trump, that he accuses, in many of his posts, the American traditional media of bias towards the Democratic candidate, Joe Biden, trying to direct public opinion, not against Biden, but against the major media. On his Twitter and Facebook pages – the number of followers of which reached, till October 28, 2020, 87.3 million and 30.5 million, respectively - he does not hesitate to show himself as being subjected to systematic and deliberate injustice, stirring the emotions of his supporters and those who are hesitant and taking advantage of the low confidence of a broad spectrum of Americans in traditional media.

Trump has emphasized the role of social media in presenting his visions and statements the way he wants to be presented and perceived. He abruptly walked off in the middle of an interview with CBS News’ “60 MINUTES”. A video posted on the program’s Twitter page on October 26, 2020, showed that Trump resented the questions, and when asked whether his social media posts turn people off, he replied: “No, I think I wouldn't be here if I didn't have social media. But the media is fake. And frankly, if I didn't have social media, I’d have no way of getting out my voice."

Despite the significance of these websites, as Trump states above, his relationship with the administrations of the social media websites and their publishing policies was - euphemistically speaking - not good. He signed an executive order in May 2020 that reduces the legal protection granted to these websites and changes their legal status from a forum that is not responsible for users' postings to a publishing house legally responsible for them. According to Communication Decency Act – section 230, social media platforms do not hold any responsibility for the published content, only allowing “blocking for conservative reasons”, such as violent or pornography content.

Trump's threat to revoke this legal advantage came after Twitter added a warning calling for the need to review the facts on one of his tweets, the first time the site has added a "Fact-Check Label". The tweet stated that mail-in ballots could only be highly fraudulent.

The administrations of these platforms are going through what can be described as an "emergency" that imposes great responsibilities for monitoring and blocking violent content, as these elections are taking place amidst a state of ethnic tension in some districts, not to mention the accusations daily exchanged between both "Republican and Democratic" camps, the matter which increased the spread of rumors. Biden has repeatedly criticized these platforms, especially Facebook which he accused of "failing to stop the spread of misinformation, plots and advertisements full of lies."

The administrations of these platforms stress that they will take several steps and procedures to create a safe political environment that is not used for the purposes of negative incitement to the public. For example, Facebook adds a tag calling for a visit to the "Voting Information Center" on posts about the election process and on all posts on the pages of prominent partisans such as Trump and Biden. The platform also confirmed that it would remove content related to the final election result, unless the latter had been officially announced. There are fears that a party would resort on polling day to preceding the announcement of victory to move its supporters to celebrate without actually winning. Such a scenario - a party declaring its "misleading" victory - may increase the degree of its supporters' rejection of the real election results, which would create public pressure to question the election results and enter a spiral that could cause widespread constitutional and security shakings.

In addition to controlling negative content; social media is facing another challenge related to cybersecurity and raising its capabilities to address any systematic and deliberate manipulation that may be carried out by external parties. Mueller Investigation, conducted by the US Attorney General, concluded that Russian Military Intelligence was involved in penetrating Democratic Party servers through a campaign on social media.

The investigation came after "Democratic" suspicions of coordination between prominent members of Trump election campaign and official Russian bodies in the midst of the previous presidential elections. The report did not prove "any criminal collusion" between Trump campaign and Moscow.

In March 2018, the shares of Facebook were fallen due to what was described as a scandal sparked by a psychological study of Cambridge Analytica, a political consulting firm, used to direct specific political advertisements with the aim of influencing the voting decisions of American electorate.

The CEO of the company, Mark Zuckerberg, could not but admit that there was a third party that exploited the data and privacy of the website's users for political ends. Despite what was presented by the legal defense that it is impossible to control the activities and behavior of advertisers on the website, the US Federal Trade Commission decided, in July 2019, to charge the company a $ 5 billion fine in compensation for violating the privacy of 87 million users. The Information Commissioner’s Office in England also imposed the maximum fine that could be imposed on the social media giant; 500,000 pounds.

To be short, perhaps the influencing factors in this election round are vague, giving way to any of the candidates; yet, social media platforms have the hold upon the electoral scene enabling the victory of the candidate employing it. In the age of “Big Data”, information control leads to elections control; for a thorough reading to reality necessarily leads to the ability of taking initiative. Such a reading requires the employment of AI algorithms since it is impossible for human beings to be able to process such Big Data at high-speed.