Scenarios for the next president in light of opinion polls

Scenarios for the next president in light of opinion polls

Opinion polls of the 2020 elections, as well as US elections in general, largely attract lots of attention, follow-up and controversy. Despite their inability to determine the final winner, they provide important insight into the preferences of American voters preceding polling day (on November 3, 2020). Having regard to that, this article examines four potential scenarios for the candidates Joe Biden and Donald Trump winning the election, based on an analytical perspective of various polls. * This is the fifth article in a set of articles and papers published successively, discussing certain aspects of the internal and foreign dimensions of the upcoming US elections.

The last presidential debate, on October 22, 2020, has shed light on the unique and exceptional character of the US presidential elections of 2020. The sharp political polarization together with the coronavirus pandemic, which infected roughly 9 million Americans up to October 31, 2020, make these elections - in which millions cast early votes - the most significant event; as the president-elect will not only determine the domestic affairs, but also the global footprint of the United States of America.

As is the case in every US election, opinion polls receive more attention, follow-up, and sometimes skepticism. As for this year, the latest polls indicate that the Democratic candidate, Joe Biden, is far ahead of his Republican counterpart, Donald Trump. Up until October 29, 2020, The Economist magazine notes that he is "very likely" to win over Trump in the electoral college, as his victory in the college votes is 96%. Meanwhile, national polling averages for FiveThirtyEight, a polling aggregation pioneering website, show a 51.9% lead versus 42.8% for President Trump. According to the Financial Times, if elections are held today, Biden would have 279 electoral votes. 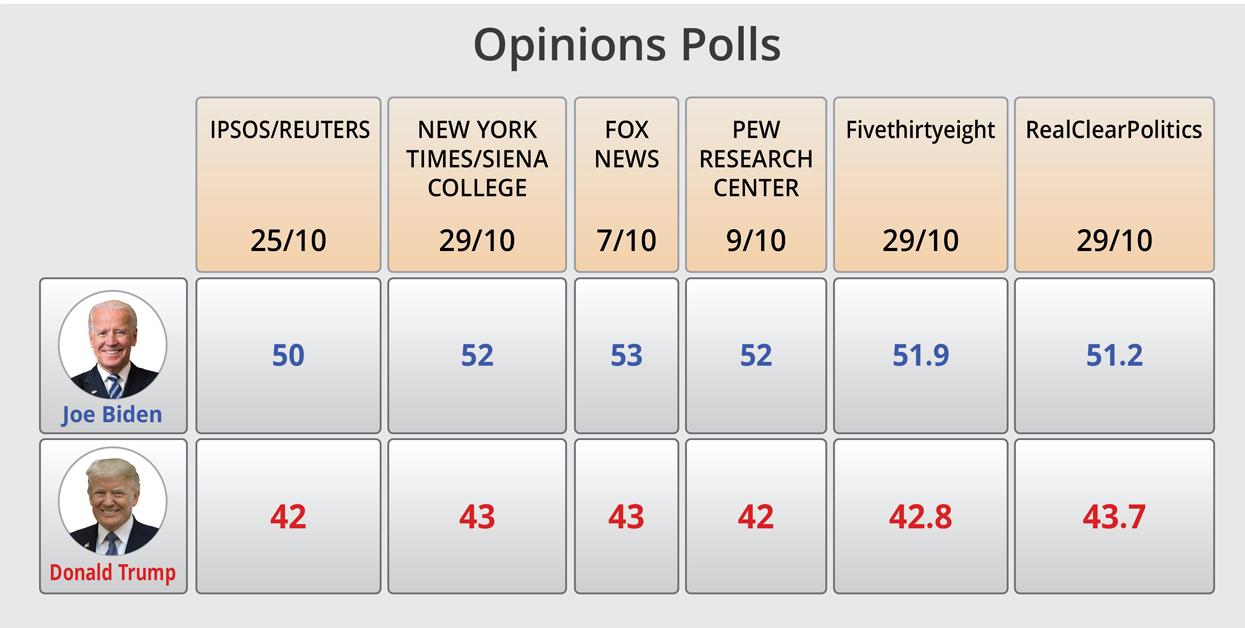 Pollsters note that Joe Biden has been steadily leading since last spring of 2020, which means his chances of winning are higher than was the case with the Democratic candidate, Hillary Clinton, since her polling lines in the opinion polls for the 2016 US elections were crossing with Trump’s, indicating that the presidential race was hanging in the balance.

Biden’s prospective is not limited to this. Several polls approve his leading in swing states. The following table shows a collection of polls in these states up to October 29, 2020: 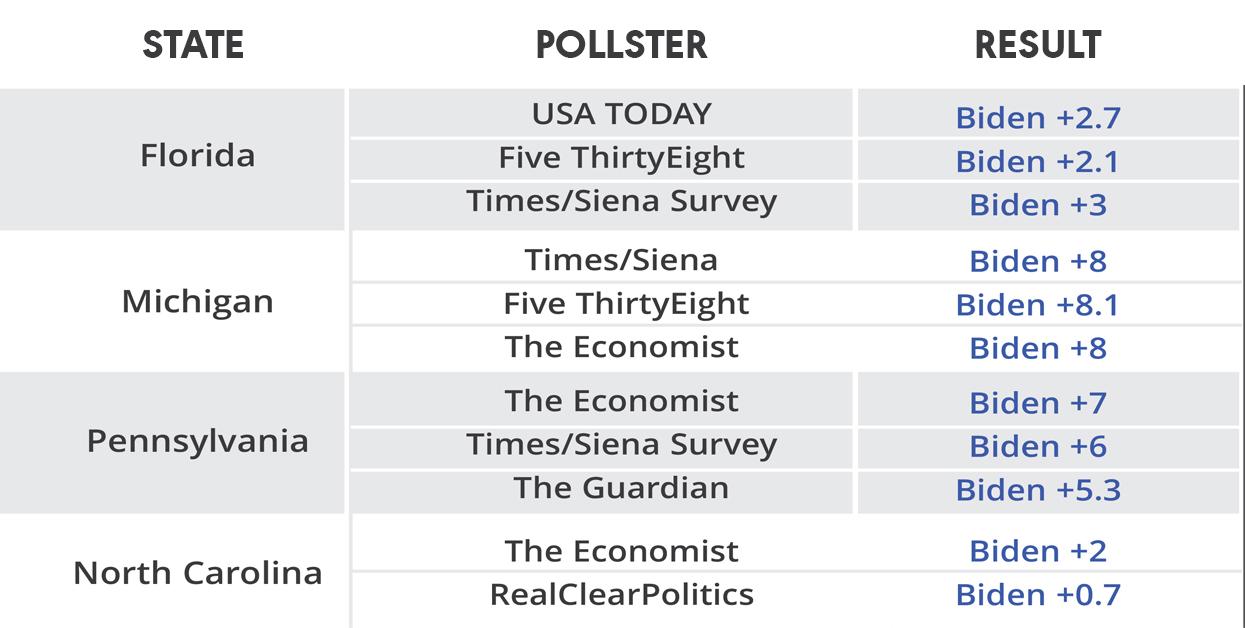 In view of the above data, this article seeks to present four potential scenarios in which Trump may reverse the polls’ results and achieve victory:

Scenario one: opinion polls are inaccurate

In light of the above, it appears that many opinion polls agree that the Democratic candidate, Joe Biden, is taking a lead over the Republican president, Donald Trump. However, the accuracy and reliability of these figures provided by opinion polls are largely brought into question.

It is reasonable to state, before all else, that it is true that opinion polls provide insight into the popularity of candidates, especially at the national level; however, they may not necessarily be a defining factor in determining the winner. For instance, in 2016, many polls exaggerated the chances of Democratic candidate, Hillary Clinton, as the night before election day, the New York Times reported that she had a 91% chance of winning, while FiveThirtyEight predicted she had a 71% chance. On the contrary, the results brought forth the victory of the Republican candidate, Donald Trump, which many considered surprising.

Many pollsters, therefore, dedicated themselves to the task of understanding and explaining such an outcome, in an attempt to renew confidence in opinion polls. The most important of these attempts was the report issued by the Ad Hoc Committee on 2016 Election Polling of the American Association for Public Opinion Research.

Nevertheless, it turned out that many pollsters at that time had ignored some factors which ultimately determined the result in favor of Trump, including; first, the exclusion of the less-educated groups against the overrepresentation of educated groups, the result of which was the overestimation of support for Hillary Clinton, while leaving the less-educated Whites, fully backing Trump, in the shadows; second, underestimating the role of swing states in determining the winner of the elections, especially in states located in West and Central America. Finally, there were many voters who settled in favor of Donald Trump but did not want to openly proclaim it.

Hence, many of the opinion polls conducted today have become tuned-in to the demographic and political characteristics of the target sample, in addition to the fact that pollsters are showing more interest in swing states, which means that the margin of error for many polls will be less than it was in 2016.

Election analysts and observers have concluded that if there is a way for President Donald Trump to win the election, it must include the support of White voters, especially the elderly and those with low education (below a bachelor's degree). This demographic group is credited with his winning the race for the White House in 2016; according to the data, Trump won 57% of white and low-educated voters, compared to 36% for Democratic candidate, Hilary Clinton.

However, recent opinion polls show the decreased support of this demographic group for him, not to mention that his approval ratings among the American electorate are generally negative. An American national opinion poll conducted by the Global Strategy Group for consulting, updated on October 21, 2020, showed that 47% of respondents disapproved of Trump's handling of the economy, 57% disapproved of the way he is dealing with the coronavirus pandemic, and 54% disapproved of his response to the protests following the death of George Floyd.

The indications that imply the shift in the attitude of this demographic group are perhaps the greatest concerns of Trump's future in the White House. Meanwhile, the Democratic candidate, Joe Biden, has an approval among these groups that Hillary Clinton had not previously enjoyed. According to nationwide polls, older White people and women support Biden; in the CNN/SSRS poll, 60% of people aged 65 and over said they would vote for him.

All things considered, should Trump be prepared to win the elections, he needs, first and foremost, to change his rhetoric towards this demographic and age group; otherwise, his chances of winning would possibly remain low.

Predicting election results depending on opinion polls may be unsound; for after all is said and done, the actual voting takes place on polling day when nobody knows for sure who will attend to cast their vote, the candidate for whom the voters will decide to cast their vote, or who has not yet made up their mind on the candidate. FiveThirtyEight data indicates that 13% of voters in 2016 made their voting decisions on election day; therefore, the actual vote on November 3, 2020, is what - at the end of the day -s will determine the winner.

With more than a week left before the election day, electorate votes remain volatile and unstable, as there is a chance for any unforeseen event that might affect their preferences and attitudes. For example, just 11 days before the 2016 election, FBI director, James Comey, revealed that his agency is looking into re-investigation into Democratic candidate Hillary Clinton's use of her personal email for official purposes during her tenure at the Department of State, the news which largely affects voters' attitudes at the polls. Likewise, any unexpected event could tilt the balance in President Trump's favor.

Yet, it is also logical to exclude such events; as many previously expected that President Trump's infection with Covid-19 would be the event that could change the course of the elections but passed without leaving any trace on the opinion polls. Since the presidential debate ended without raising any points of controversy and without any significant differences in the polls, it is expected that the importance of this scenario will diminish day after day - at least internally, and there remains the option of international actors claiming to influence the course of the elections, such as Iran and Russia.

One likely scenario is a repeat of what happened in 2016, when Trump lost the popular vote but won the electoral college vote. Even with the polls favoring Biden, there are enough states in which Trump could win or achieve a margin of error in his favor. In 2016, his success in winning the votes of Wisconsin, Michigan and Pennsylvania was enough for him to reach the White House, according to the Global News website.

Still, it is not an easy task. Brookings Research Institute indicates that Trump needs to reduce the gap with Biden to about two points, a scenario that is very much similar to that of 2016, adding that this means Trump wins in all the states in which he led last elections in addition to Nevada in order to win a total of 312 electors. This scenario seems unlikely since Biden beats Trump on average in more than 11 polls, by a difference of 8.1.

Yet, there is a chance of a combination between the two scenarios, i.e., with an unexpected incident. If any defect appears in the postal election mechanism, in terms of the data filled out, or the lack of logistical support necessary for this service, which may undermine voting on election day, such as a lack of staff or lack of familiarity with many of the mechanism, or any of these events - this may make accepting the accuracy of the votes or the validity of the ballot highly questionable. This scenario, drawn up by Lawrence Douglas, professor of law at Amherst College in Massachusetts, might ultimately lead to the elections being decided by legislative bodies in which midterm elections will determine the majority.

However, it may become never-ending; for in light of the raging debate over the Supreme Court, the sharp political polarization, the great mobilization of the events of George Floyd's murder, among other issues, such results may be interpreted negatively. According to the poll conducted by Reuters/Ipsos between July 29 and August 25, 2020 - that 71% of Republican voters fear election fraud, which means that President Trump's questioning rhetoric about the elections resonates in his base - these elections may ultimately lead to much more civil unrest than in the dispute over who won the 2000 election.

Finally, we have shed light at opinion polls and the opinions of election analysts and observers about the candidates' chances. All of the scenarios presented above are realistic with none of them to be excluded despite the differences in their chances, according to the remaining time for the elections. Everything aside, November 3, 2020 has the final say in deciding the identity of the next US president.