Natural Gas: between tankers and pipelines

Natural Gas: between tankers and pipelines

This article outlines the highlights of the natural gas production and distribution map and its most famous selling markets, as well as the endeavors of the major countries to compete over these markets, which are gaining importance and growing prominence in the global energy market. 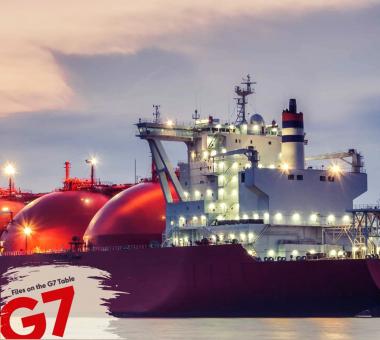 This is the seventh material of a series that is being published in succession in the file “Papers on The G7 Table.”

We cannot talk about the relations of the major industrialized countries that compose the G7, whether among themselves or their external relations without stopping by the subject of the energy market, going through the latest notable developments in it, the biggest producers and consumers, mainly because energy, since the beginning of capital manufacturing until now, is the economic and geopolitical pillar for most of the countries of the world.

If a certain country owns a specific natural resource capable of elevating energy self-sufficiency, then this country will be able to enter the international energy market (oil, charcoal, gas) as an exporter, and consequently, achieve stability or even a surplus in the current account and balance of trade. While if a country or a province does not own energy resources, it will be obligated to import such vital commodities to sustain the services and developmental needs of the citizens.

Natural gas is one of the most important fossil fuel that is gaining a broader and more coherent place in the international energy market since the beginning of the current century due to various reasons: natural gas has less polluting effects on the environment when compared with oil and charcoal, it is also less dangerous than the nuclear reactors used for peaceful purposes that lost trust after the nuclear disaster of Fukushima, Japan in 2011, moreover, the natural gas market is more stable than the oil market that witnesses collapse from time to time. Like what happened, for example, in 2016, or what happened in April 2020 when the prices of West Texas Medium American Crude (WTI) fell to the negative zone and United States strategic stocks were full to brim, all due to the great imbalance caused by the demand on energy in the complete lockdown after the outbreak of novel coronavirus.

Liquefied Natural Gas (LNG) has been gaining an increasing share in the world energy market over the recent period, although manufacturing LNG only began in the 1960s. In addition to the positive aspects of natural gas in general, the technological advancement did contribute to innovating practical ways to speed up producing liquified gas, transport, and store it.

It`s worth mentioning here that storage is a highly important issue, as liquefying gas allows using much smaller storage areas than that needed for storage in the gaseous state, which is yet another advantage for the LNG.

According to the annual report of predictions issued by “Royal Dutch Shell” company in February 2020, it is expected for the demand for LNG to increase from 359 million tons in 2019 to 700 million tons in 2040, and this increase will be based on the United States and China, both making up about 70% of the total increase in demand in the period (2010-2018).

The positive aspects of natural gas in general and the liquefied type particularly does not mean in any way that it is aloof from negative economic effects that are still being inflicted by the outbreak of the novel coronavirus, for instance, the price of the LNG in Asian markets – the biggest consumers – dropped to 2.8 per each one million British thermal units*[1], which is $4 less than the prices in October 2019.

“Reuters” referred in June 2020 that there are tens of tankers loaded with LNG that are stuck in the sea because the strategic stocks are full in European markets, South Korea and Japan.

G7 and the LNG

In its report entitled "Global Gas Security Review 2019", the International Energy Agency indicated that the United States would surpass Australia and Qatar in producing LNG in 2024, with the amount of 113 billion cubic meters annually, and China will also become at that same year the biggest consumer in the world with 109 billion cubic meters.

Washington keeps following its aspirations in becoming number one in energy worldwide. After being in the lead of crude oil producers in 2018, surpassing Russia and Saudi Arabia, while “Chevron” American company at the head of other American companies is trying to search for all means to achieve a pioneer position in LNG production, and as a sign of that, the above-mentioned company took over “Noble Energy” through a $5 billion stock exchange deal. “Noble Energy” owns natural gas extraction concessions in several areas in the middle east, especially in the territorial waters of Israel and Cyprus.

The countries of the European Union (members and non-members in G7) do not possess enough fossil fuel, particularly after signs of contraction in Norwegian oil and gas production that started to show up nearly since 2013. This situation makes the European continent a huge energy market among competitors – specifically U.S and Russia – for gas is being used as a replacement for charcoal in many European countries, which creates more demand for natural gas in general.

Meanwhile, Washington is trying to convince its “allies” in the European continent of the necessity to vary their energy sources and to not rely heavily on Russia for this matter. Notably, Russia already provides 40% of the European Union energy needs overall.

It is general knowledge, anyway, that the main reason for such calls is America`s frenzied endeavors to promote its exports of LNG, so much that the U.S. administration did impose sanctions on the activities of the companies contributing to building “Nord Stream 2” which is a pipeline that costs about 10 billion euros and is meant to connect Russia with Germany through Baltic sea and has a total capacity of 55 billion cubic meters. The European Union, on its side, condemned the American attempts to obstruct a legitimate economic activity between two sovereign states.

The United States' dependence over LNG is large compared to the Russian federation that benefits of a region that connects geographically with the continents of Asia and Europe, still, liquefying gas or transport it through pipes are always two parallel processes, because exporting countries always want to have a foothold in the biggest number of markets, regardless of their geographical position.

And here we see that the United States is not satisfied with its position in the European market of natural gas, although it has the third rank after Russia and Norway, it seeks to increase its market share benefitting from the Hydraulic Boom that it achieved in extracting oil and gas.

Not to mention that the American activity in exporting LNG was noted by the commercial opponent of the United States, as the American LNG tankers are crowding out the original suppliers (Australia, Qatar, and others) on the coasts of China, it is also expected for the U.S. to become the first provider of LNG after implementing the first phase of the commercial agreement between Washington and Beijing.

And to stay in Asia, Japan is the biggest LNG importer in the world, but it might lose this position to China by the end of the current year, Japan`s imports of this commodity has reached about 36.1 million tons compared to 30.8 million to China until June 2020 according to “Refinitiv” agency. The U.S. ranked 10th in the list of exporters to Japan which includes countries like Qatar, Russia, Indonesia, Australia, and others.

Japan is participating through “Mitsubishi”, next to other companies from China, Malesia, and South Korea in a huge project to liquefy Gas in British Colombia province west of Canada, a project that has a total cost of $40 billion and aims at fulfilling the Asian market demand.

At the same time, Canada is the number one provider of American needs of natural gas. In 2019, 90% of all American natural gas imports came from Canada, compared to 89% of American energy exports that were directed to Canada according to the American Energy Information Administration.

Energy trade has always been the most obvious form that clarifies the status of the economy and the geostrategic dimension and indicates the necessity of securing exploration and extraction areas in addition to ensuring the safety of the pipelines and related matters, and here appears the natural gas – liquefied in particular – as a factor to tangle economic relations even more, consequently adding more political complexity on an international level.

Notably, the countries counted as natural gas selling markets have acquired a broad political maneuver space to some extent; due to the abundance in offers sometimes, thus, these countries choose the most suitable prices while keeping the providers in a state of uncertainty regarding the exact stability level of economic and diplomatic relations.

This offer demonstrates the big challenge ahead of major industrialized countries – whether they had their summit or not – expressed in the possibility of organizing the energy file among themselves, especially between the united states and the European countries in G7, and regarding the natural gas market, considering its growing status in the map of the international energy that involves many players with conflicting benefits.