This paper presents a reading in Iran's "ambiguous" attitude of Russia's military operations in Ukraine and the nature of this attitude by standing aside from all parties and to identify dimensions of the situation in order to answer the main question: Does Iran's Foreign Policy witnesses a transformation from East to West? 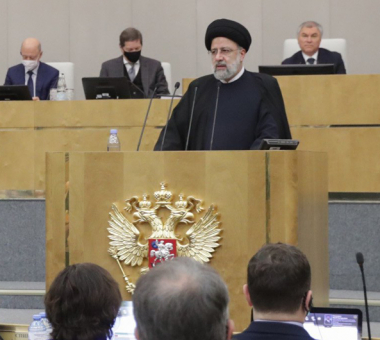 The Russian-Ukranian War revealed a new stop in the context of international relations that can at least be described as a second stage in the actual “competition” between the East and the West. Russian-American and European relations have become more aligned and polarized than before, and in between are the estimates that indicate a public Chinese support for Russia's military operations against Ukraine and its confrontation in general with the West. This polarization expands to reach the Middle East and show deep divergence in attitudes in a number of countries including the Gulf and Egypt besides showing the United States' approach. As Saudi Arabia and EUA upheld OPEC Plus Agreement with Russia and refused increasing their crude oil production capacity, while Turkey and Israel adopted reference attitudes that achieve their ultimate interests, kept at the same distance from all parties of conflict and did not engage in intermediary negotiations between Moscow and Kiev.

Among all appears the remarkable attitude of Iran towards Ukraine's crisis when Tehran becomes closer to Washington than it is to Moscow despite Iran's strategic relation with Russia while it is rivalry with America.

Iran's attitude raises several questions in this introduction, the most important of are: Can Tehran's attitude be considered a deep strategic transformation in its foreign policies? And will this reflect on the Middle East in one way or another?

Nature and dimensions of Iran's attitude of the Ukrainian crisis:

Despite the developed relations between Iran and Russia, Iranian leaders and political elite did not declare or state a word that indicate Tehran's support or opposition of the Russian military operation in Ukraine. Senior Iranian officials talked neutrally about the crisis meanwhile Tehran keeps an unwavering political attitude of the crisis including Iranian President Ali Khamenei declaration that Tehran endorses stopping war, while Iranian foreign Minister Hossein Abdollahian considered that the provocative actions of NATO are the root cause of the Ukrainian crisis, though he emphasized that "the war is not a solution".

Iran's attitude may be outlined as standing aside from all parties of the Russian-Ukrainian crisis whether on military, political or economic levels. Iran also assures that dialogue and diplomacy are the only way out of this crisis, and it seems that this ambiguous attitude implies an opposition of Russia's military operations against Ukraine since it totally rejects war for changing current facts, and fears announcing any supporting attitude that might legitimize future U.S or Israeli military operations against its nuclear programme. That’s why it abstained from voting on the United Nations General Assembly resolution that condemns Russia's military operations and called for ending them when it was supposed to join Russia's allies like: Syria, Eritrea, Belarus and North Korea by voting against the resolution.

Furthermore, Russian operations in Ukraine may directly affect Moscow's influence in other issues within the scope of Iran's security and interest especially in Syria and Afghanistan and we will come to this later.

Correspondingly, Iran's attitude of Ukraine's crisis emphasized denouncing the potential expansion of the NATO to the east which practically means besieging Russia and Iran believes this is against its interest since it considers Moscow an international supporter and part of its external power. In addition to the risk of Ukraine becoming a quagmire of Russian attrition which may divert the latter's military and geopolitical priorities map away from supporting Iran's cases. Besides, NATO expansion might threaten Iran as well if we took into consideration membership of Turkey - the large country on borders - in the NATO.

The Ukrainian crisis occurred along with the increasing talk about Tehran and Washington achievement of a set of understandings in Vienna talks which would soon lead to the sign of a new nuclear agreement or the return to work according to the previous 2015 agreement.

As for Tehran, making an agreement with the United States is a rescuer from influence of imposed sanctions and pressures since the maximum penalties campaign former U.S president Donald Trump launched that left behind tremendous exhausting implications for Iran's economy. Thus, the success of Vienna’s talks is a strategic goal for Tehran.

Ukraine's international geopolitical crisis has cast a shadow on Vienna's talks, particularly after Russia's request to the West for written guarantees in order to continue cooperation with Iran, which Iran's interior saw a threatening attitude for its national interests that aims at obstruction of understandings occurring in Vienna after proceeding a historical crucial phase.  Therefore, political elite of Iran confirmed that Tehran does not concern Russian demands and Iranian Foreign Ministry warned that any impositions from foreign factors are not acceptable.

Russian attitude of Vienna talks after its military operations in Ukraine may be perceived in three ways:

First: Iran may strategically threaten Russia after the potential nuclear agreement, specifically while Tehran welcomes providing Europe with gas and compensating any possible shortage in supplies coming from Russia. Estimates indicated Iran's ability to provide 20% of Europe's needs. Historically, Tehran was always a willing competitor for Russia in gas exports as the former Iranian president Hassan Rouhani offered exporting gas to Ankara in his visit to Turkey in 2016.

Second: Tehran's return to the energy global market will lead to control skyrocketing prices which reduces financial revenue Russia needs under Western sanctions, especially since Iran is considered a gas and oil producer and capable of pumping large supplies in the global market particularly after its announcement of exploring "Chalous" field; the largest natural gas field in Caspian Sea mid-2021.

Third: Moscow attempts at utilizing its role in Vienna talks as leverage against the West to soften its stances towards the operations in Ukraine amid the Western countries' need to rapidly sign the nuclear agreement to reduce oil prices and minimize Europe's reliance on the Russian gas.

For Iran, whose relation with Russia has faced remarkable development within the last decades, it realizes the great harmony that regionally and internationally characterises both countries' discourse does not mean an actual consistency in their policies. Let's go back a little to the past when Russia played a role in obstructing the sign of the 2015 nuclear agreement according to the audio leak of the former Iranian Foreign Minister Mohammad Javad Zarif. Moscow raised oil and gas export exploiting American president Donald Trump abandon of the 2015 nuclear agreement.

Similarly, Iran considered that Karabakh Agreement between Russia and Turkey is targeting it, as Fars News Agency described Azerbaijan's dominance over the Nagorno-Karabakh border strip as an "ominous development against Iran" and that the Russuian-Turkish agreement excludes Tehran from Caucasus equation. Despite the main Russian- Iranian understandings about supporting president Bashar al-Assad in Syria, both Iran and Syria are on opposite sides concerning many Syrian files like Russian-Israeli understandings that strikes against Iranian-backed armed groups and the Russian-Turkish cooperation in northern Syria.

Repercussions of the development in attitude from "tactic" to "strategic":

Obviously, Ukrainian crisis and Vienna talks has generated an Iranian balancing attitude between its closest allies and most prominent opponents, this paradox took place in Iran's ideologies and was expressed through  "neither Eastern nor Western" principle. The necessity for impartial national interest regarding Ukraine's crisis is highly superior to Iran's international relations regardless how crucial or significant they might be.

Nevertheless, this does not mean that Tehran tends to damage relations with Moscow or allowing it to disrupt understandings achieved in Vienna Agreement. Iran's attitude will remain subject to two variables and the influence they have on each other: Ukraine's Crisis and Vienna talks.

Of course, the new data of the variants above will certainly change the nature of Russian-Iranian alliance on the one side if Iran signs a nuclear agreement within the upcoming days or weeks, it will encounter a wide set of foreign relations based on economic as well as strategic partnerships particularly from strong opponents of the Russian military operations. Besides, the nuclear agreement is likely to lead to reinforce Iran's influence in mutual arenas of both countries which are governed by delicate balances as in Syria, Afghanistan and even Central Asia.

In conclusion, Tehran will maintain an attitude within political "tactical" maneuvers, but the course of events of the above mentioned two cases will keep the door opened for a "strategic" transformation that aims at rapprochement with the West at the expense of relations with Moscow.