ARAB STANCES ON THE UKRAINIAN CRISIS: OPPORTUNITIES AND THREATS

ARAB STANCES ON THE UKRAINIAN CRISIS: OPPORTUNITIES AND THREATS

This article reviews the Ukrainian crisis effects on the Arab countries, in addition to the opportunities and challenges such crisis poses, in light of the Arab regional system's position on the international scene. The article also reviews the region's position in the global energy market, as well as the potential implications on food security, in order to understand the nature of the Arab stance on this crisis.

The repercussions of Russia's military operation in Ukraine are felt in Arab countries, with the operation's effects on food security, energy prices, and labor markets. While some Arab states fear the negative effects of the Ukrainian crisis may threaten their economies and plans to recover from the Covid-19 pandemic, the crisis seems to be opportunities for other states, in many files.

Same as the world, the negative and positive sides of the impact is affecting the Arab States in more ways than one. The region remains an important theatre of competition between the great powers, particularly the United States and Russia. In addition to the region's position in the global energy market, as the region contains some of the world's largest oil and gas producers, as well as many Arab states dependent on Russia and Ukraine as major sources of strategic food commodities, primarily cereals, the matter which carries a threat of a potential food crisis.

Moreover, the Ukrainian crisis is reorganizing geopolitical alignments around the world. The United States is expecting its allies in the region to take action in order to determine their positions on the Russian military operation, and even punish Russia. Meanwhile, Arab countries are forced to choose and align their policies with one out of these two powers. To avoid this, countries, such as Saudi Arabia and the United Arab Emirates, are a special regional bloc to resist the deep attraction into the orbit of a major power.

Reasons of The Arab Stance from Ukraine Crisis

The Middle East is one of the least integrated regions in the world, often described as a "region free of regionalism". The joint and multilateral institutions are underperforming, ineffective, often non-binding in their decisions and outputs, and lacking mechanisms to enforce such decision and outputs. The Arab States are, therefore, individually divided in their stances on the Ukrainian crisis, whether at the official and popular levels. Different official stances expressed in a state of neutrality can be distinguished, or the stance of being in harmony with the American stance.

Of these stances; Riyadh refused to increase petrol production upon a request from the United States and Europe, to curb the increase in petrol's prices. Riyadh confirmed its commitment to the OPEC+ agreement with Russia in 2020. While the United Arab Emirates abstained from voting on a U.S. draft at the UN Security Council to condemn the Russian military operation and demand withdrawal. The two countries' stances reflect their complex relationship with Biden administration, and the Gulf's desire to diversify international relations, as Washington is shifting its strategic weight to confront China. This diversification covered several areas, including economic, military, and politics. 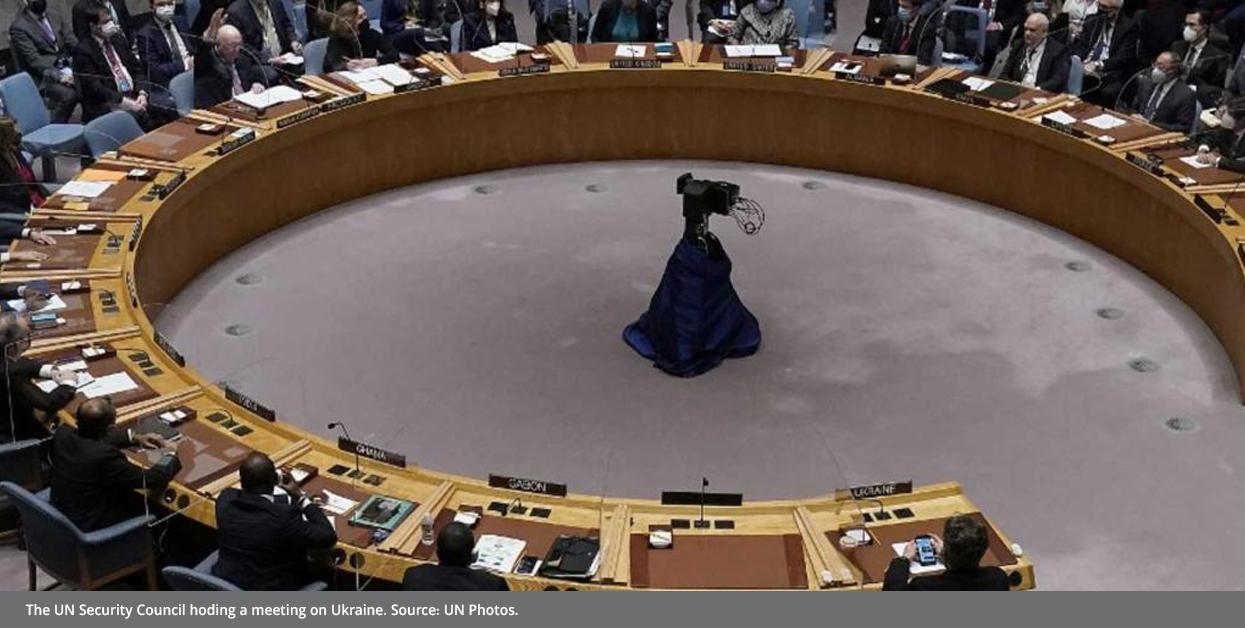 But many other Arab states, still stuck in the midst of U.S.-Russian competition, are taking their steps and stances with so much of care and balance to their relations with the two countries, due to the interlocking of such states' vital, economic, and military sectors. Therefore, such states' attitudes towards one side may increase the repercussions of instability in the region.

It is clear to the Middle East that the world order is already returning to multipolarity. Nevertheless, the current stances of the states, particularly the Arab states, will deepen the distribution of global power, and the plurality of actors on crucial issues. As a result, Arab states in the future will be more flexible in choosing their interests, and in selecting those who may serve these interests.

Perhaps the question the Western leaders are thinking about today, is how to reduce the dependence on the energy imported from Russia, especially after Europe failed to keep up with the U.S. embargo on Russian oil, given Europe's heavy reliance on these imports from Russia. This decreased the US embargo's value, as Russia can compensate the US missed petroleum from the global market. Without Europe's participation, it will be difficult to influence Russia's oil and gas sectors.

However, the Western states are moving according to schedules, programs, and strategies to reduce their dependence on Russian energy, or to respond to the risks of future supply problems. In both cases, the Western states are enhancing the stands of the Arab oil-producing countries in the global energy market, not to mention the role of the Ukrainian crisis in the short-term rise in energy prices, which means unexpected financial flows to oil-producing countries' treasuries. The crisis pushed the price of crude to more than $100, with a $10 increase in the price of oil, adding $65 billion to GCC oil export revenues, HSBC estimated, in February, oil price at $100 per barrel would increase the budget and current account by 10% and 15% respectively of Gulf Cooperation Council GDP states.

Diplomatically, the process should be very precise, in terms of employing the crisis in favor of further financial and economic gains, and in a way that contributes to a rapid recovery from the repercussions of Covid-19 pandemic. The decision to increase production, or not, relates to balancing the lack of being in tandem with the Western stance of the Ukrainian crisis, and not provoking a Russian reaction that comes at the Arab states expense, as happened earlier with Iran. The fact is Europe will determine its alternatives and options from potential suppliers in the medium term, including Israel, which is seeking to revive the debate on the gas pipeline in the eastern Mediterranean, especially after its stance on the Ukrainian crisis has outweighed western countries.

On the other hand, the Ukrainian crisis has created higher expenditures on other Arab states to secure energy and food. Many of their governments have already taken a series of austerity measures to offset the significant increase in energy prices, particularly in the early stages of the Russian military operation.

As the Ukrainian crisis continues, the effects of rising goods and food commodities, and the shortages of basic and strategic crops, are already felt in many Arab countries. The most vulnerable and poor states are affected. The United Nations International Fund for Agricultural Development warned that the ongoing conflict will lead to an increase of world hunger and poverty.

In fact, Russia and Ukraine have a large share of global wheat exports, of which 40% are imported by MENA countries. MENA is a geographical area that already suffers from the impact of climate change, and the increasing risks to the water and food security of these states. The crisis pushed food prices higher. IFAD analysis shows that the increases in the prices of basic food, fuel, fertilizers, and other successive effects of the conflict, have a severe impact on the poorest rural communities. For example: Finally, considering the domestic factors is very important in the Arab states' stances on the Ukrainian crisis, in terms of the crisis potential positive and negative effects, particularly on the economic level of energy prices, food level, and the concerns associated with an upcoming food crisis. Besides all, the Ukrainian crisis highlighted a recent strategic understanding of Arab states' stances towards international policies, in the context that these states tend to be neutral when it comes to global balances of power. This shows the realization that the world order, led by the United States and the West, is disintegrating.