How was the largest free trade agreement in history signed?

How was the largest free trade agreement in history signed?

This article provides an analysis to the conditions of signing the Regional Comprehensive Economic Partnership, in a reading of China’s role in this important economic event and its relations with other involved parties, in addition to speculating about the way in which the coming US administration will deal with this commercial understanding. 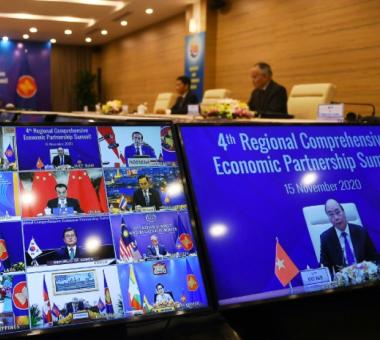 On 15 November 2020, the Vietnamese capital Hanoi hosted a virtual summit so that 15 countries in Asia-Pacific region can sign the Regional Comprehensive Economic Partnership which includes the states of ASEAN organization: Indonesia, Malaysia, Vietnam, Laos, Burma, Cambodia, the Philippines, Singapore, Thailand, and Brunei, in addition to Japan, New Zealand, Australia, South Korea and China. It is the biggest free trade agreement in history because the involved countries sum up one third of the world gross product, and nearly third the world population. Moreover, it is a turning point in the region for China at the expense of the United States of America which has recently started recovering from the turbulent atmosphere during the presidential election; however, it is still suffering from the health crisis resulting from the spread of “Covid-19” and the related global economic crisis.

On the other hand, the Chinese economy seems to be the first economy to recover from the impacts of the pandemic. It grew by 4.6% in the third quarter of the current year 2020, China's business activity figures recovered in September 2020, exports grew to 9.9% and imports to 13.2% compared with figures of the same period in 2019. According to observers, it is because industrial production indicators have improved in addition to the early intervention of the state to confront the coronavirus. In other words, the Chinese economy is progressing positively if compared with its counterparts in the world in general.

On 20 January 2017, the first day of President Donald Trump's assumption of his constitutional powers, he implemented one of his electoral promises; which is withdrawing from the Trans-Pacific Partnership (TPP), that the administration of his successor, Barak Obama, helped co-founding in 2015. This step was a warning to the whole world, and directly to the involved countries that protectionism era has started and free trade –if any- would be primarily serving the American interests.

Then Covid-19 pandemic appeared as a health crisis hitting the world economy which was already suffering from difficult structural imbalances such as high debt, the slow developmental process, increased unemployment rates, volatility in energy prices, and many others.

Each in its own context, these two factors have helped Beijing negotiate better in the talks preceding the signing of the agreement including negotiations and ministerial meetings throughout the past eight years, in addition to the Chinese officials’ attempts to dismantle the alliances binding most of the region countries with Washington. However, this what Trump has done – unintentionally- when withdrawing from the TPP, thus undermining the trust in the United States as an economic partner. This was evident when 8 countries that were members in the last agreement joined the RCEP with China. Furthermore, some of the US “allies” joining the agreement after the preliminary results of the presidential elections clearly indicates the desire to create a non-American economic partnership, not necessarily an alternative, regardless who will be in the White House.

As for the impacts of Covid-19 on the economy, according to the data from the Asian Development Bank issued in mid of September 2019 in the update of “the horizons of development in Asia” report which covers 45 countries, all countries in the region will have witnessed deflation in their economies by 0.7% by the end of 2020. This contributed in accelerating the negotiations preceding the agreement that seemed –lately- attractive because the Chinese economy is involved.

It might be Surprising that many countries in south East Asia -which have possible sharp disagreements with China concerning the latest’s geostrategic aspirations in the South China Sea- did not mind joining the agreement in which Beijing will gain the upper hand economically, as observers predict. It is worth mentioning that China is the biggest trading partner for ASEAN, it is also –for instance- the biggest source for Taiwan, the small island in Southeast China which officials in Beijing demand uniting it with the motherland.

The political discord between China and ASEAN did not prevent the latest from joining a long-term economic partnership with China, because there is no reliable economic alternative to solve the region’s economic problems.  In the same vein, there is a considerable disagreement between Australia and China that was not solved even after signing the agreement, the causes of which is Australia’s request to launch an investigation concerning the roots of coronavirus referring to the allegations that Chinese authorities did not work properly to prevent its spread globally- at a global scale. Before that, “Huawei” had not been allowed to participate in developing the infrastructure for the telecommunication network based on the same security arguments repeated by Britain and the United States.

Remarkably, Australia joined the new agreement despite the escalating trade dispute with China which imposed additional Customs Tariffs on the Australian goods likes barley, meat, wine and all goods arriving in China. However, Australia’s joining the agreement could be a sign of Canberra’s desire to solve the disagreement with the its biggest trade partner, China, indirectly.

Some details about the agreement

The agreement was more than 500 pages, in addition to thousands of extra pages as annexes focusing on the details of customs procedures.

The agreement contains granting zero-tariff treatment among countries by 90% for 20 years. Moreover; in chapter 16, it legislates government procurements with the condition of being clear and precise to promote economic integration. This detail is convenient for the Chinese economy characterized by the big role played by different official institutions.

Chapter 15 focuses on technological cooperation and speeding up its integration into economic relationships, taking into consideration narrowing the technological gap among the agreement parties. This was preceded by mentioning the bigger role that should be given to e-commerce in chapter 12 to strengthen economic links and facilitate them in general, in addition to separate chapters containing items on dispute resolution mechanism, follow-up committees and other substantive and procedural aspects.

The Regional Comprehensive Economic Partnership was the framework to combine and develop all agreements and trade understandings among the region states, and to establish new agreements - between China and Japan, for instance- which have thorny diplomatic relationships.

Observers see that India is still an impediment to the Chinese “legal” economic primacy in Asia; in 2019, New Delhi withdrew from the prior negotiations fearing that it would damage the local industry if cheap Chinese goods were allowed to enter. Despite all of this, chapter 20, the last chapter in the agreement, mentions that India can join it any time because it witnessed the negotiations since the beginning, and there is no need to wait for 18 months after the agreement’s entry into force, which is the required period for the accession of other states, if they so wish.

The objective reality is that Coronavirus outbreak contributed in accelerating the change of the world order structure which contains many contrasting actors and parties. Thus, it is not possible to understand and study the dimensions of the mentioned agreement except through its connection to political, economic and even health and security international variables.

During his campaign, the US President-Elect, Joseph Biden, made no comment about the economic role of his country in South East Asia and the Pacific, or whether or not his country will activate the Trans-Pacific Partnership, in particular, after the US Navy military movements in South China Sea done during periods of the Trump era proved invaluable to contain the Chinese influence. More precisely, nothing has come out of the security choice if not accompanied with and based on a logical economic alternative for the region countries.

Biden may dismantle the agreement parties through working on intimidating the geostrategic Chinese threat and strengthening the coalition with the Indian partner trying to contain the effects of this agreement that cannot be described as highly coherent and durable when it comes to the diplomatic and political relationships among its parties, and this is what the coming US administration may depend on.

However, one cannot overlook that China -as a rapidly rising and growing economic power- will continue to be an important link in the international supply chain thanks to its brilliant patience in managing its interests in various regions and seizing opportunities, in addition to the crises afflicting its opponents. This why it is difficult to remove it from   the multilateral dependency economic equation.