Iranian foreign policy and its practical implications represent one of the key Middle Eastern controversial issues with an international dimension. How do the G7 countries deal with Iran's behavior in the region? Is there an agreement on this interaction mechanism? This is the second paper in the series that will be published under "Files on the G7 Table." 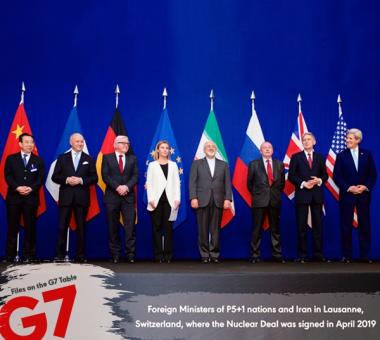 * This is the second article in the series being published respectively in the “papers on the G7 table” file.

The G7 major industrialized countries of the G7 are witnessing sharp contradictions that may lead to a steady decline in corporation among these countries. What created this situation is the opposing positions, not only within the group itself, but also in the whole world, about the American administration policy under, Donald Trump, regarding most of the issues on the world arena (For example, climate, trade, armament, etc.). It is no secret that the Middle East is highly important for the countries in this group and other major countries.

Those who are even slightly informed about the political and diplomatic history of the region realize, to a greater or lesser extent, the reason of its importance. Its strategic location along with its resources, even its human capital, are all factors that drive the international parties to compete on achieving the greatest interests there. This definitely means a conflict of interests, for, sometimes, these interests do not invoke treaties and conventions governing international relations. Therefore, the establishment of normal and equitable relationships based on the principles of respect for sovereignty, and strengthening the diplomatic work is absent. These principles fortify relationships in the foreign policy domain from being dragged into chaos when confronting a clash of interests in the interrelationship among two countries or more.

Every province or region in the world has a specificity of a certain kind, and the way of dealing with it changes in accordance with the pragmatic perspective adopted by the concerned country in its pursue to enhance its influence in this region or that. Nevertheless, this does not mean that all regions or provinces are equally important for all countries; this is because of the overall features the concerned region has.

As stated earlier, the Middle East possesses material advantages, in addition to another aspect that must be taken into account as a major determinant when studying the polarization and the existing political bickering; which is the presence of some counties in the same region that are seeking to reap maximum gains through extending its military or political influence, or both, on its neighboring countries.

Based on that, the G7 has to deal with the Middle Eastern countries whose way to manage their foreign policies is considered a controversial issue among the G7 countries on the one hand, and among them and other major powers on the international arena; Iran is one of these countries.

How do the G7 countries consider the Iranian behavior in the region?

In their summit, held in France August 2019, the G7 countries agreed that Iran must not possess nuclear weapons. This announcement has outraged Iran that accused the European countries of refusing to meet their commitments under the Nuclear Agreement signed in 2015, as a response to pressures from the United States that withdrew from the Agreement in May 2018.

The European Union, Germany and France on top of it, rejects Iran possession of a nuclear weapon.  At the same time, it does not agree with Washington’s “the maximum pressure on Tehran” policy, because according to some European leaders, this has and will increase the Iranian foreign interventions in the internal affairs of the neighboring countries.

This is not limited to the European invocation regarding the American- Iranian relationships at the diplomatic level only; it also includes the economic aspect as well. Germany, France and the United Kingdom have sought to safeguard the trade relations with Tehran; and this was the reason of inventing the financial instrument “INSTEX “by: Paris, Berlin, and London in January 2019, in addition to other European countries that joined in December 2019. This instrument is a barter mechanism for the Iranian products (including oil) against their European counterparts aiming at circumventing the financial system controlled by Washington. However, this instrument has not entered into force except for two commercial operations since its inception until May 2020. This proves its ineffectiveness, according to announcements by some Iranian officials.

After the American repositions in the Middle East, successive events have indicated that Iranian-European relationships can hardly continue at the political and economic level under the American embargo against Iran. No doubt, this creates a negative atmosphere for Iran’s position in the international and regional order, and this is the reason why it has announced more than once that it will reduce its compliance with the articles of the Nuclear Agreement regarding restricting its ability to enrich uranium. The last announcement was in January 2020 when Tehran abandoned all its obligations regarding the restrictions on quantities and percentages of uranium enrichment, and the numbers of centrifuges assigned for that. Germany, the United Kingdom and France responded by activating the Conflict Resolution Mechanism included in the Nuclear Agreement as a deterrent for the Iranian violations.

This was accompanied by the outbreak of military tensions in the region that became dangerous in more than one event. For example, the unidentified targeting of ships in the Gulf of Oman in June 2019, targeting facilities belonging to Saudi Aramco in September of the same year. Although Ansar Allah, Houthis, claimed responsibility for the Aramco attack, a confidential report by the United Nation Sanction Committee revealed by Routers in January 2020 indicated that the Houthis were not responsible for targeting Aramco. This reinforces the American and even the European accusations that Iran is behind, to this or that extent, the attack that targeted 5% of oil production in the world.

Iran is looking for another international source of support to relay on while confronting the local and international challenges due in part to the American sanctions, taking into account the rigorous American position towards the nuclear file, and the wavering  European position towards keeping the Agreement that lost its thrust for all parties. Apparently, the outcome reflected in the form of an agreement between Tehran and Beijing that has not been announced officially yet; according to some sources, massive Chinese investments amounting to about $400 billion will flow into the Iranian economy in the domains of infrastructure, energy and technology over the course of a quarter century.

This would greatly complicate the adoption of a unified position by the G7, besides its inconsistent attitude towards Iran, there is considerable disagreement between them over the nature of relations with China. On the one hand, the United States has been working to impose economic sanctions on Chinese productive activities since March 2018; this has severely affected European economies because they are linked to the economies of China and the United States of America with a complex network of supply chains. On the other hand, not all European countries have the same view about the relation with China; as for the European G7 member states, Italy is moving towards strengthening its relations with China, which is not preferred by France and Germany, which believe that the interests of all EU countries should be taken into account when any country deals with China. As for the United Kingdom's position, it is similar to the American position calling for reducing China's influence at all levels

The European countries do not consider the Nuclear Agreement as a defining issue for their national interests, this explains, to a large degree, the convergence of European views with the American position recently towards this issue. Nevertheless, this convergence is different from congruence in position, for there are significant differences regarding to the mechanisms of the American pressures on Iran; especially, in light of economic and social implications the latest is suffering from while confronting the “Corona” Pandemic. However, for Iran,  the validity of the agreement in the form it was adopted in, in 2015, is indeed a defining issue, for it could have enabled the Iranian regime of resolving its economic problems, and overcoming ,politically, the opponents of this Agreement in Iran.

The Iranian file will be strongly presented in the coming G7 summit that is supposed to be held in September 2020, because the Iranian file and Iran’s influence in the region is heading ,day after day, to the point of no return, which is the direct military clash with the United States or with one of its Middle Eastern allies. This will lead to disastrous consequences in the whole region due to the presence of armed organizations that owe material and ideological loyalty to Tehran, consequently, we might face a state of public chaos.

As for the other alternative that the European member states may seek is going into further negotiations about the Nuclear file. This will probably not take place under the current American administration in view of the proximity of the presential elections whose results are highly vague, taking into serious consideration that it is not merely restricted to the changes that may take place in the White House, for there are also the Iranian elections to be held in 2021. Moreover, the Chinese support for Iran may qualitatively change the rules of the game in the Middle East