This analytical paper discusses the increase of the emerging threats, associated with cross-border drug cartels, which the Jordanian army recently announced a change in rules of engagement, in line with the response to the dimensions and effects of this threat. 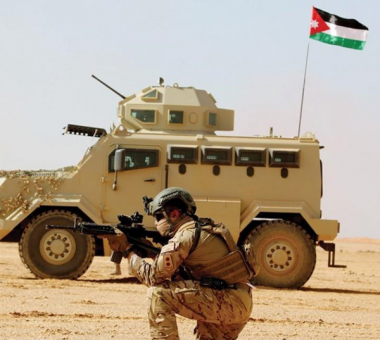 The Jordanian army's battles with drug cartels along the Syrian-Jordanian border, mark a different phase of confrontation and challenges. After Jordan's success over the past years in facing of the threat of terrorist groups on the border with Syria and Iraq, trans-state drug cartels deem Jordan as not only a transit area to other countries, but also as a target area for this illegal trade, according to Jordanian Deputy Prime Minister and Foreign Minister Ayman al-Safadi.

On the other hand, the threats resulting from the proliferation of armed groups in the region, demonstrate a focus on emerging and non-conventional threats, which are carried out by sub-State forces, that will have clear implications for the region's new geopolitics maps, the different definition of the threat agenda, and it will cast a shadow over the national security system of States, and possibly on the aspects of their defensive doctrine, armament systems, confrontational resources, and their emerging means, at the national, regional or international levels.

In addition to traditional threats, such as proliferation of the chemical and nuclear weapons, etc., the emerging threats, such as cyber-attacks, organized cyber-piracy and data theft, the spread and transformation of epidemics such as Covid-19, the expansion of climate change, and attacks or threats associated with armed and terrorist groups. They all stand as fundamental and new threats to the national and strategic security of states, including their institutions, infrastructure, vitality, and their resources and capabilities.

This analytical paper discusses the increase of the emerging threats, particularly what is associated from them with forces infra-state forces, whether they are armed groups or transnational drug trafficking gangs, supported by other armed and influential forces and parties. This reading takes Jordan as a model for illuminating this threat and analyzing part of its effects and dimensions, given the current threat related to drug gangs.

Changing the Rules of Engagement

On February 17, 2022, the Jordanian army announced that smuggling attempts across the Syrian-Jordanian border have become organized, using sophisticated tools such as drones, and covered by armed groups, along with the with increasing activity of smuggling networks, including 160 operating networks operating in southern Syria. This was reflected by the large number of smuggling attempts, which the Jordanian army dealt with. According to Jordanian authorities, the attempts to smuggle more than 16 million Captagon pills (equivalent to the amount seized throughout 2021) were thwarted since the beginning of this year have.

Military Media Director, colonel Mustafa al-Habari, said that only since the beginning of this year, the army killed 30 smugglers, foiled the entry of 17348 thousand narcotics packs, and thwarted the entry of more than 16 million Captagon pills. During 2021, the Jordanian army thwarted 361 smuggling attempts, and confiscated 15.5 million Captagon pills during the year.

Al-Habari added “Jordan is fighting an undeclared war on the border with drug traffickers and their supports", adding that the groups of former smugglers, consisted of 3 to 6 people, might be now up to 200 people by now "using tactics, deception, and camouflage" he added.

To emphasize the importance of this issue to the decision-making foundation in Jordan, His Majesty, King Abdullah II, visited the border area with Syria on February 14, 2022, and called on the military to "show the red eye in dealing with smugglers", i.e. to confront them strongly and firmly. "I am confident and assured in the ability of the Arab Army to protect our country's borders, as you have always done in the most difficult circumstances we have experienced," his majesty said.

The new rules of engagement require maximum resolute, direct, and immediate response, in order to eliminate any suspected moving target on the Jordanian-Syrian border. This reflects the determination of the Jordanian armed forces to seriously bring the risk of infiltration and smuggling to an end, reduce the growing threat, and send clear messages in such regard.

In addition, the shift in the rules of engagement harnesses all the possibilities available to the Jordanian army, and gives it a sufficient flexibility to act and make decisions, in order to quickly and effectively deal with smuggling operations. This aims to establish a new equations for border security, in the face of the new strategic environment in the territory, in which players are differed, and patterns of threats became complicated. All of that has an impact on rearranging the national security priorities and defensive doctrine.

This was clearly applied on the night of Thursday, January 27, 2022, when the Jordanian armed forces killed 27 drug traffickers along Syria’s snow-capped border, early Thursday morning, in what officials described as the deadliest so far in an escalating conflict with criminal networks operating from Syria. In this incident, the Jordanian authorities said they that seized a large quantity of Captagon-fenithaylin, and thousands of narcotics packs, after erect shooting and a manhunt that included what an official described as a "column" of smugglers and armed escortsو who crossed into Jordan under the cover of a snow storm last month.

This was the most serious incident within a series of clashes with smugglers over the past two years, the Washington Post reports. The kingdom faced a wave of illegal drugs leaking across the border, which U.S. and Middle Eastern officials said is came from one of Syria's major manufacturing centers. Authorities confiscated billions of dollars’ worth of Captagons over the past two years in nearly a dozen countries, from the Gulf to southern Europe.

"The Threat moves from Terrorism to be Drugs"

Explaining the shifts in the list of threats and risks, Ayman al-Safadi, Jordan's deputy prime minister and minister of foreign affairs and expatriates, said during a visit to Washington last month that Jordan’s high-profile threat across its northern border, has shifted in recent months from terrorism to drugs. "Our border with Syria is 367 kilometers. In the past few years, the biggest threat from the situation there has been terrorist organizations. Now, hardly a week goes by without our army aborting one or two attempts to bring drugs into the country. In the past, we were seen as a transit market ... But now, with the emergence of (cheaper) chemical drugs, such as Captagon, we became a target, and this is a challenge we are facing" Safadi said at a Brookings Institution panel discussion on January 13, 2022. 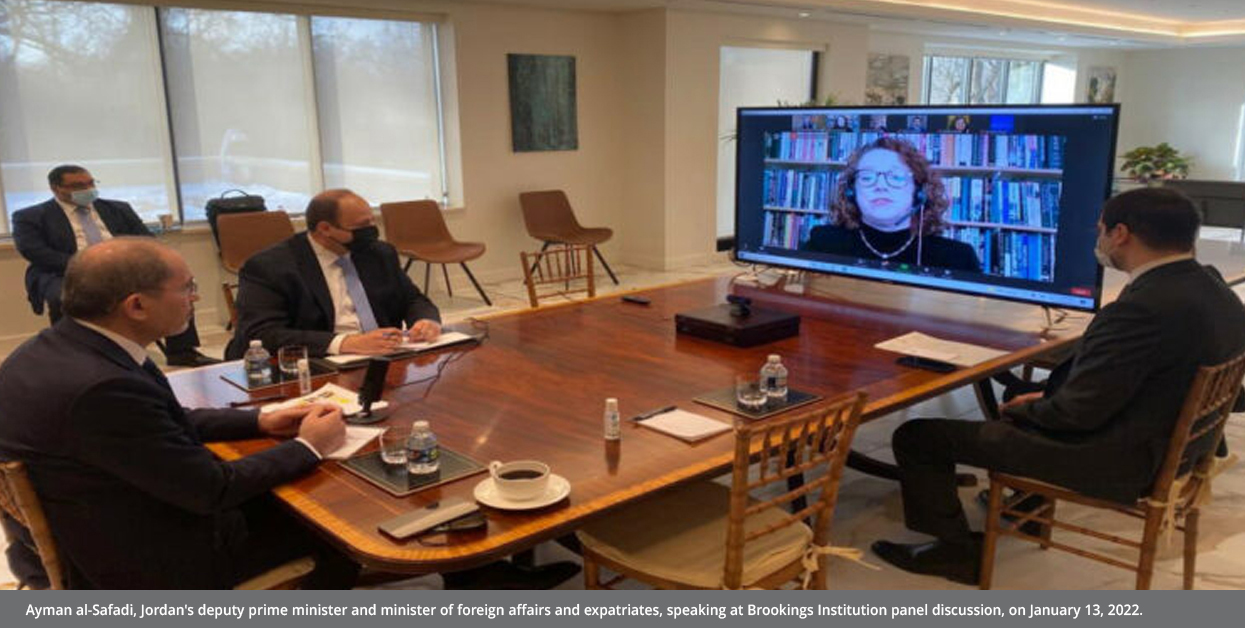 Over the past years, information were contradictive on the main bodies behind the smuggling operations from inside the Syrian border to Jordan. Although the dead affiliate to clans living there, according to Al-Suwayda 24 network director Ryan Marouf, "there are major networks and people from the region who are carrying out the {networks tasks} for financial and economic considerations".

In fact, Syria, which has been in crisis for 10 years, is the world's leading producer of Captagon narcotics, according to COAR publications. It is a trade which revenues are estimated to be $3 billion a year. The New York Times newspaper attributes the leap in narcotics trade in Syria, to the reason that the cross-border gangs have the ingredients for the success of such trade, as experts are available to mix medicines, as well as factories to manufacture products that hide tablets. In addition to shipping lanes in the Mediterranean, and the routs of smuggling to Jordan, Lebanon, and Iraq.

Such trade is, mostly, supported by Iranian-backed armed groups based in southern part of Syria. Jordanian officials told Reuters that Iranian-backed groups and militants, controlling southern Syria, are responsible for the increase of smuggling. Jordanian officials said they have expressed concerns to the Syrian authorities as well as to Russia, a key ally of Syrian President Bashar al-Assad, which maintains military police forces south to Syria. In this regard, the Syrian authorities announced, in recent months, that they thwarted several attempts to smuggle drugs into Gulf states markets. These authorities also said they are carrying out a local campaign to combat the production of Captagon.

The concern is that the demographic shifts, that Syria has undergone over the past 10 years, including south Syria, as well as the concentration of armed groups and forces there, particularly those loyal to Iran, would redefine the considerations and limitations of Jordan's border security with Syria, which over the past years, have been built on conditions and data that no longer exist or have an impact as they used to be, particularly with regard to the system of Jordanian relations with tribal and clannish forces in south Syria.

In conclusion, the changing environment, in south Syria, appears to pose a new challenges and threats to Jordan's national security. Despite the Syrian army's control of areas in the south of the country, the security landscape there remains unstable, moving in worry-casing directions with the large presence of Iranian-backed armed groups, which appear to be active in drug trafficking and smuggling operations. this coincides with demographic changes and the balance of power in the southern regions, the matter which that make it difficult for Jordan to communicate effectively with the Syrian interior in order to contain the risks, before thsy approached the border. The threat associated with the drug trade is part of the complex border landscape that Jordan is seeking to counter, by changing rules of engagement, as well as friendly relations with the Syrian authorities.

The opinions expressed in this study are those of the author. In no way does Strategiecs take responsibility for the views and positions of its author on security, economic, political, social, and other issues, and such views and/or positions do not reflect those of Strategiecs.