What is being written about the novel Coronavirus and its future implications is but mere analyses and theories, however, the truth will be disclosed in the coming months or even years. Therefore, whether this virus is real or manufactured, this article highlights the extent to which it has spread terror all over the globe, and how great politicians have contributed to turning this epidemic crisis into a dangerous political game, threatening the entire world. 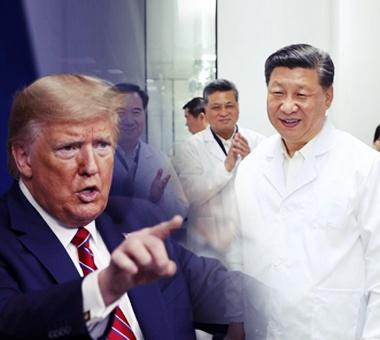 Back in December 2019, news outlets around the world started reporting on a mysterious virus coming out of China. The Coronavirus (COVID-19) is reported to have originated in a live animal market, one of many, famous across the country.

By suddenly announcing strict quarantine measures that were simultaneously implemented across the country, China singlehandedly changed the nature of the outbreak and the global response. While the rest of the world initially thought we were seeing a repeat of the 2003 SARS outbreak, which infected 8,000 people across Asia and recorded 800 deaths, on January 22nd, the world woke up to the news that overnight, Wuhan, Hubei, Beijing and the vast majority of the rest of the country had gone into quarantine, halted all economic activity, ceased production and closed its stock markets. Yet even then, I don’t think anyone realised the true extent of what was to come.

Sadly, it was already too late and the virus, that had been left to spread freely for more than two months, had already reached the far corners of the globe. In the meantime, cases began to appear at an exponential rate across Asia, the Middle East, Europe, and America.

Soon enough, other countries followed suit, with the likes of Italy, France and Spain going into full lockdown with strict legal and financial repercussions for those who broke the rules. However, response to the virus hasn’t been the same everywhere. Countries such as the UK and US have chosen to take very different approaches, choosing to delay lockdown measures as for as long as possible, although we now see that it looks inevitable too.

In all the chaos, the panic and anxiety, one ailment has spread faster than the virus itself and, whether we admit it or not, afflicts us all. Fear. Fear of what will happen if one gets sick, fear of helplessness and isolation, fear of the unknown; to quote John Allen Paulos, “uncertainty is the only certainty there is.” At a time when   the world is coming together, the media is instead showing us how it is every man for himself, with shoppers stockpiling supplies as if they were preparing for Armageddon. It is this fear that has created a perfect storm of misinformation that has snowballed to become the single most valuable tool in attempting to achieve the greatest coup of all time.

In the supersonic speed at which the virus has spread, it has also mutated from a health issue to become a political behemoth. In the US for example, Trump’s repeated refusal to call the virus by its name, referring to it as ‘the Chinese virus’ demonstrates how deeply politics has permeated this global crisis.

Trump’s rhetoric, coupled with those who jumped on the bandwagon blaming the virus on Chinese habits proved to be the smoking gun for President Xi Jinping to rally the country behind him. This xenophobia gave him the perfect platform to stem the growing tide of general malaise among the metropolitan elites who look favorably and maybe enviously to the West. He cleverly employed these accusations, manipulating their meaning to demonstrate to the Chinese people what the rest of the world thinks of them; how they were left to save themselves as the world offered no help and instead sat back to lecture and abuse them.

The same can be said for Iran, another country that has been hard hit by Coronavirus. The government’s ability to respond to the outbreak in Tehran was heavily hampered by US sanctions. Calls to ease the sanctions have fallen on deaf ears, leaving the Iranian people to feel like outsiders watching on as the world united in response to the outbreak in Europe.

All this pales into comparison with what we have seen in the US. At the time of writing, the US has become the global epicentre of Covid-19, with warnings from officials to expect in excess of 240,000 deaths. It goes   without saying that President Trump’s handling of the crisis has led to fierce debate, with Democrats and the liberal leftist media jumping on the opportunity to criticise the White House’s action plan.

The media have hammered home the point that President Trump seems to have ignored early warnings that China was purposefully downplaying the true scale of the pandemic. What they’ve failed to ask, is why he’d take such a big risk mere months before an election. I expect the answer to be simply because they refused to believe his point of view that Coronavirus is nothing but a virus of Chinese origin or the "Chinese virus", which indicates that he accused China of spreading this virus!

I commend China and its motley crew for their efforts to try and shake up the status quo.  Through strict measures that exceed what is applied in some countries of the world that have been infected with the same epidemic, China which accuses the US of creating the coronavirus and spreading it in Wuhan has succeeded in containing the virus. The world admired China’s measures of complete lockdown, which appeared good at reducing the spread of the virus significantly, and other countries followed suit with the same measures of lockdown and curfew despite all the accusations that China has spread the virus to show the world its capability to respond to any future aggression, or that it is a force to be reckoned with and its time is surely coming.

Coronavirus has created a perfect storm of events to establish a chaotic alliance between Europe, China, Iran and the Democrats with the aim of bringing down their common enemy, President Trump. By coordinating their extreme, heavy handed responses to the virus, they have been able to spread misinformation on the true extent of the outbreak, forgetting that the winter influenza virus kills more people than Coronavirus has so far. The death rate is no higher than what is normal for this time of year and we will see a sudden fall in the number of infections and deaths as we head into the summer months.

I believe that over the next four years we will witness political, economic, and perhaps fierce military, technological battles as the world discovers the motives behind COVID-19. In particular, if Trump returns to the White House. The economic and political fallout of the virus will cause China’s and USA’s economy to shrink as businesses look elsewhere, the Eurozone will collapse; subsequently leading, due to differences that erupted after the outbreak of the virus in the Old Continent, to the dissolution of the EU, and Iran will finally be pressured to abandon its nuclear program completely. As for the Arabs, they may benefit from the preoccupation of major powers to start developing and modernizing their countries.

I read, as I write this article, a report issued by a UK research center demanding compensation from China for the losses suffered by the world as a result of this virus that came out from their country. This is also a major legal and economic battle that some Western countries may - if they are serious about it - want by it to confiscate Chinese investments and funds in Europe and America.

I would like to conclude this article noting that all of what is being written on this topic are mere analyzes and hypotheses, while the truth will reveal more during the coming months or years.

Whether it’s real or made up, for me, Coronavirus has spread panic all over the globe.  Therefore, people must realize that the world's great politicians are - today - in great disarray because they have contributed to turning the crisis of the spread of the epidemic into a dangerous geopolitical game that may threaten the whole world and plunge it into conflicts that threaten the entire human existence.