Biden's visit: Who will lose and who will gain? - opinion

Biden's visit: Who will lose and who will gain? - opinion

In general, the points of agreement between Washington and Riyadh transcend the contentious issues between the two countries. 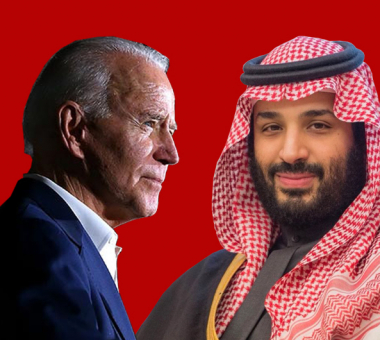 Much has been written about what President Joe Biden seeks to gain from his July 15 visit to Saudi Arabia (KSA), yet very little attention has been paid to what the kingdom seeks to gain. And therein lies the problem: the failure to recognize that Arab-Western relations is no longer a one-way street. US Secretary of State Antony Blinken and British Prime Minister Boris Johnson’s earlier visits failed when they asked for Saudi help but offered nothing in return. If Biden does not learn from prior mistakes, he will return, as Blinken and Johnson did, empty-handed.

What Biden stands to lose

Simply stated, America needs the assistance of Saudi Arabia and the United Arab Emirates (AEU) at least as much as they need US support. With the midterm elections approaching, lowering inflation and gas prices are top priorities. His failure to bring both under control could mean a Republican-controlled Congress and the Democrats losing the White House, in 2024.

Biden recently began attacking American energy companies for not using their record profits to drill for more oil. Still, building more oil rigs will not be enough. The West needs Saudi Arabia and the UAE to increase their oil production by millions of barrels a day to help lower prices and reduce Europe’s dependence on Russian oil.

Both countries can also play a strategic role in alleviating conflicts involving America, Europe, Russia, and China. Both Saudi Crown Prince Mohammed bin Salman and UAE President Mohammed bin Zayed wield influence with Russia through its membership in OPEC+ and with China through its Belt and Road Initiative, which requires that Beijing maintain excellent relations with its Middle East partners.

Yet, without a serious American commitment to ensuring their security and interests, it will continue to be in the best interests of both Arab leaders to remain neutral.

What Saudi Arabia hopes to gain

Under the crown prince’s leadership, the kingdom launched Vision 2030, a strategic framework to reduce its dependence on oil, diversify its economy, and develop public service sectors, such as health, education, infrastructure, recreation and tourism. Just as the kingdom recognizes how important US support is to Vision 2030’s success, it is critical that the US recognizes the opportunities this initiative offers for a long and stable relationship with the kingdom.

This is undoubtedly the most prominent issue that will be discussed at the July meeting. Biden, who will fly directly from Israel to Saudi Arabia, is expected to deliver ideas or outright proposals on behalf of the Israelis for opening a negotiation route between Riyadh and Tel Aviv.

Israel wants more Arab countries to join the Abraham Accords club, whose members already include the UAE, Bahrain, Sudan and Morocco. “There is a list of target countries. Saudi Arabia is first among them,” then-Israeli Foreign Minister Yair Lapid, who now also serves as prime minister to Israel’s interim government, recently declared.The kingdom supports the agreement to normalize diplomatic relations with Israel but made it clear it would not do so unless there was serious progress in the Israeli-Palestinian peace process. It wants an equitable two state solution that establishes a Palestinian state with 1967’s internationally recognized borders, encompassing the West Bank, Gaza and east Jerusalem, as well as Israel’s withdrawal from the Syrian Golan Heights.

Though a Saudi-Israeli agreement based on these conditions is unlikely, preliminary mediation efforts could lead to the first steps between Riyadh and Tel Aviv towards an economic partnership, unrestricted Israeli passage through the kingdom’s airspace, as well as direct flights for Muslim pilgrims from Israel and the territories into Mecca, and a US-led regional military alliance to curb Iranian aggression.

On this last point, the subject of a Middle Eastern NATO will also be discussed, especially since bipartisan legislation introduced in Congress, on June 9, supports the integration of air defense capabilities among the US, Israel, Gulf Cooperation Council (GCC) countries, Iraq, Jordan, and Egypt, to counter ballistic missile and other airborne threats from Iran and its network of regional proxies.

Building a new system of containment and deterrence against Iran will create a new approach to dealing with organizations such as Hamas; a renewed spirit of cooperation in cultural, commercial, and other fields that would help raise the region’s standards of living and thus disincentivize disenfranchised youths from joining extremist organizations; and a fruitful environment for diplomatic talks between Israel and the Palestinian Authority that has the strong support of all the Gulf states, including Egypt, Jordan, Turkey, and Morocco.

Since the Houthis, funded and trained by Iran, seized Yemen’s capital city and large areas of the country in 2014, the nation has been plunged into what the United Nations describes as “the largest humanitarian crisis in the world.” In 2015, Saudi Arabia led a military operation to defeat the Houthis, with help from president Barack Obama, who expedited the sale of US weapons to the kingdom and shared intelligence information. Even then, the US attitude toward the kingdom was dismissive and condescending.

For example, two months before Biden appointed him US special envoy for Iran, in 2021, Robert Malley co-authored an article that summarized the Obama administration’s attitude toward the US-Saudi alliance with this quote from a unnamed senior Obama official: “We knew we might be getting into a car with a drunk driver.”Having labeled America’s most powerful ally in the Middle East a pariah, Biden vowed to end US support for the kingdom, including arms sales, within weeks of being sworn in as president, even though, as he pointed out, “Saudi Arabia faces missile attacks, UAV strikes and other threats from Iranian-supplied forces in multiple countries.”

After Biden removed their designation as a terrorist group, the emboldened Houthis rejected a UN-backed truce proposal that the kingdom had accepted and instead increased the boldness of their attacks on both countries.Determined to move the peace process forward, Salman convinced Yemeni President Abed Rabbo Mansour Hadi to resign in April and be replaced with a council of eight representatives of different Yemeni groups. Later that month, the council signed off on a UN truce agreement with the Houthis. Having (presumably) learned a valuable lesson, Biden praised KSA’s “courageous leadership.”

Not for the sake of politics or the regime, but for the sake of the Syrian people who are dying from lack of clean water, medicine, food, and electricity, the international community led by the United States must establish relations with President Bashar al-Assad to address this humanitarian crisis.

Moreover, US support for Syria’s return to the Arab fold is a necessary prelude to bringing peace to the region for there can be no lasting peace without Syria. The Syrian leadership gives priority to its Arab relations – especially the Gulf states, Jordan, and Egypt – over any other alliance, including Russia and Iran. Therefore, the West should support the efforts of Arab leaders to restore communication channels with Damascus, and trust the KSA, UAE, Jordan, and Egypt to start the negotiations. After all, everything has been tried except direct negotiation – and Damascus is ready today more than ever before.

In general, the points of agreement between Washington and Riyadh transcend the contentious issues between the two countries. Both agree on the necessity of building peace in the Middle East, a two-state solution to the Palestinian cause and ending Tehran’s development of nuclear weapons, as well as its financing and arming extremist militias intent on overthrowing Arab countries and destroying the Israel.

The US and Saudi Arabia need one another’s support equally. If approached respectfully, the Biden visit can lead to the establishment of a new basis for Arab action in helping resolving the complex, multifaceted issues in the Middle East and international affairs. If so, history will record that the US’s renewed its partnership with Saudi Arabia, helped the world avoid the scourge of a new world war and saved millions of lives.