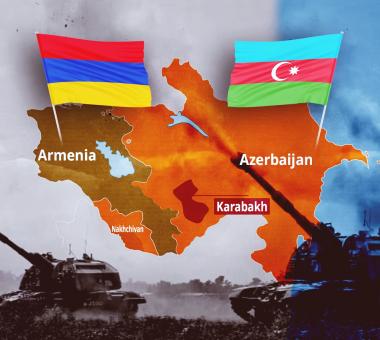 Tension in the South Caucasus between Armenia and Azerbaijan has turned into a military escalation, resulting in dozens of deaths and injuries on both sides, in light of mutual accusations between Baku and Yerevan about the party that caused the acceleration of events, which led the Armenian authorities to declare a state of war and general mobilization. Azerbaijan, in the same vein, has declared a state of war in a number of border towns and villages.

Armenia and Azerbaijan are fighting over the Armenian-majority “Nagorno-Karabakh” territory. This conflict has abated throughout the period when both countries were part of the Soviet Union, it was, however, reignited in 1988 through the date of their independence from the Union in 1991 until 1994, when a ceasefire agreement was signed between the two sides under the auspices of the “Minsk Group”, which included Russia, the European Union and the United States of America. Nevertheless, armed clashes have occasionally recurred frequently and sometimes very violently, but the current escalation is the highest since 2016.

In short, Armenia wants to maintain the status quo in the territory with its pro-Yerevan authorities, however, Azerbaijan wants to stop the interference of “foreigners" in the territory aiming at imposing full sovereignty over it.

No doubt, the influential regional countries interfered in that region; Turkish officials, on top of them President Recep Tayyip Erdogan, have expressed Turkey’s full support for Azerbaijani military movements, after having considered Armenia the biggest threat to the stability of the region. After Ankara's clear position, there was news about an intensive Turkish supply for the Syrian Turkmen mercenaries and various military equipment to the frontiers with Armenia.

Ankara is seeking to preserve its vital interests in Azerbaijan by securing Azerbaijani gas pipelines passing through its territory to Europe, such as the Baku-Tbilisi-Erzurum gas pipeline, the Tanab gas pipeline, which began pumping gas in 2007 and 2018 respectively. In addition, Ankara believes that it has a lot in common with Azerbaijan in the field of culture, language and religious belief, not to mention that it considers the current Armenian leadership the reason why major powers -in top of them is the U.s have to recognize the Armenian massacre, behind which was the Ottoman Empire during world war I. This is causing Turkey international embarrassment in dealing with human rights and political and ethnic pluralism.

Turkish support for Baku could intersect with the Israeli-Azerbaijani relations that Tel Aviv describes as strategic. Last year, Israel imported 74,000 barrels of Azerbaijani oil per day, shipped to the Port of Haifa through the Turkish port of Ceyhan. The geographical location of Azerbaijan, on Iran's northern border, is an attraction for the Israeli intelligence activity. Meanwhile and despite all of this, Tel Aviv has strengthened its bilateral relations with Yerevan in economic, cultural, and other fields. This step could be considered as leverage against Ankara, which is engaged in some activities in the eastern Mediterranean that could clash with the Israeli interests.

On the other hand, the Russian position appears vague somewhat, because Russia makes arms deals with both sides in general, and makes sure to be the number one supplier in this domain. Therefore, it is interested in settling the dispute as soon as possible, before it escalates, which may lead the Western countries to be part of this, supplying the disputing parties with weapons, and thus threaten the Russian position in this area, and as a result threaten the Russian position in this domain.  The subject of the Russian position can be discussed from another angle, by saying that the South Caucasus region has officially entered into the geopolitical competition of Both Ankara and Moscow along with Libya and Syria, taking the usual form of this competition, which is an unstable region in the medium or long term due to a frequent military movement. This instability is framed by regional and international political talks and conferences held periodically based on data on the ground with the aim of "de-escalation".

It is worth mentioning that the Armenian army, along with its Russian counterpart and seven other armies, participated in the Caucasus 2020 exercises held between September 21 and 26. Moscow takes it upon itself to coordinate these exercises periodically, for many geostrategic reasons, including highlighting the importance of its vital sphere in the south-eastern region bordering the Black Sea and the Caspian Sea.

Moscow has a military base on the Armenian territory and is engaged with Yerevan alongside Belarus, Kazakhstan, Kyrgyzstan and Tajikistan in a collective security treaty. However, Moscow has no intention to interfere directly in the crisis by providing logistical and intelligence support to the Armenian army in order not to worsen relations with Ankara, particularly those related to the energy field. It should be noted that Moscow also is not in favor of a growing European-Turkish dependence on the Azerbaijani gas at the expense of its Russian counterpart. This assumption increases the likelihood of considering the military skirmishes that have been occurring over the past decades as a manifestation of struggle over the right to export gas to Europe through Turkey, while at the same time the latter wants to continue expanding its base of energy options, in order not to rely on a main or exclusive source.

Militarily, Armenia is ranked 111th globally, while Azerbaijan is ranked 64th according to the Global Firepower Ranking of The Armies Power for 2020.

Therefore, the result of the comprehensive war, if occurred, would be in favor of Baku, which is heavily supported by Turkey according to many media outlets. However, this could change in case of increasing the coordination with the authorities of the pro-Armenian “Nagorno-Karabakh” region. Then the geographical location of this territory within the Azeri borders could be used to target or threaten to target the vital interests and strategic points. This is true if a number of countries interfered in supporting one of these parties, because the longer this current escalation continues, the higher the chances are for this scenario.

An emergency session of the Security Council is supposed to be held today to discuss the "dangerous" escalation in South Caucasus, amid international calls for a ceasefire and dialogue. It seems that events are escalating as the world is concerned with the health and economic crisis caused by the Coronavirus, in addition to the intervention of some countries that increases the complexity of the political and security issues, regardless of their regional location.