Military Features of Turkey's Role in the Ukrainian Crisis

Military Features of Turkey's Role in the Ukrainian Crisis

This report outlines the major military features of Turkey's role in the Ukrainian Crisis and evaluates reflections of this engagement on both Ukrainian and Russian Crises. It also discusses the potential political consequences that Ankara might encounter amidst the strive to control an attitude towards the Ukrainian Crisis. 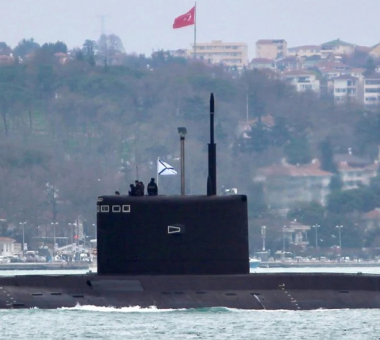 Turkey tries to form a unique attitude towards the Ukrainian Crisis to balance commitments as a NATO member on the one hand with its geopolitical reality which pushes it away from hostility towards Russia on the other hand, especially that plenty of considerable files in Turkey's calculations intersect with Russia's calculations, crises in Syria and Libya are an example.

Turkey's ratings and official’s denunciation of the Russian operations in Ukraine as a “state of war” show this balance. Turkey also voted in favour of International decisions against Russia to suspend Russia's membership in the United Nations General Assembly and Human Rights Council.

On the other hand, Turkey hasn't joined international sanctions against Russia for economic and political reasons attempting not to isolate Russia from the world rather to push it to make an influence in aspects of its rigid foreign policy.

Given this balance, Turkey has been able to host and hold several Russian-Ukrainian rounds of talks and become the most reliable channel between the two countries reflecting its attempts to move beyond the position of a host and a mediator inducing the two negotiators to make compromises and reconcile points of view.

As for the military operations, Ankara was not capable of elaborating a similar balanced attitude as a member in the NATO whose assessment of the Russian military operations in Ukraine is that they are directed against the Western mass. Therefore, Turkish military contact with the Ukrainian Crisis can be observed through:

1. Turkish Foreign Ministry's announcement based on Ankara's recognition of the operations in Ukraine as a “state of war” has activated Montreux Convention's special clause that grants Turkey's right to block the passage of warships from Bosphorus and Dardanelles straits in order to maintain free safe commercial navigation. 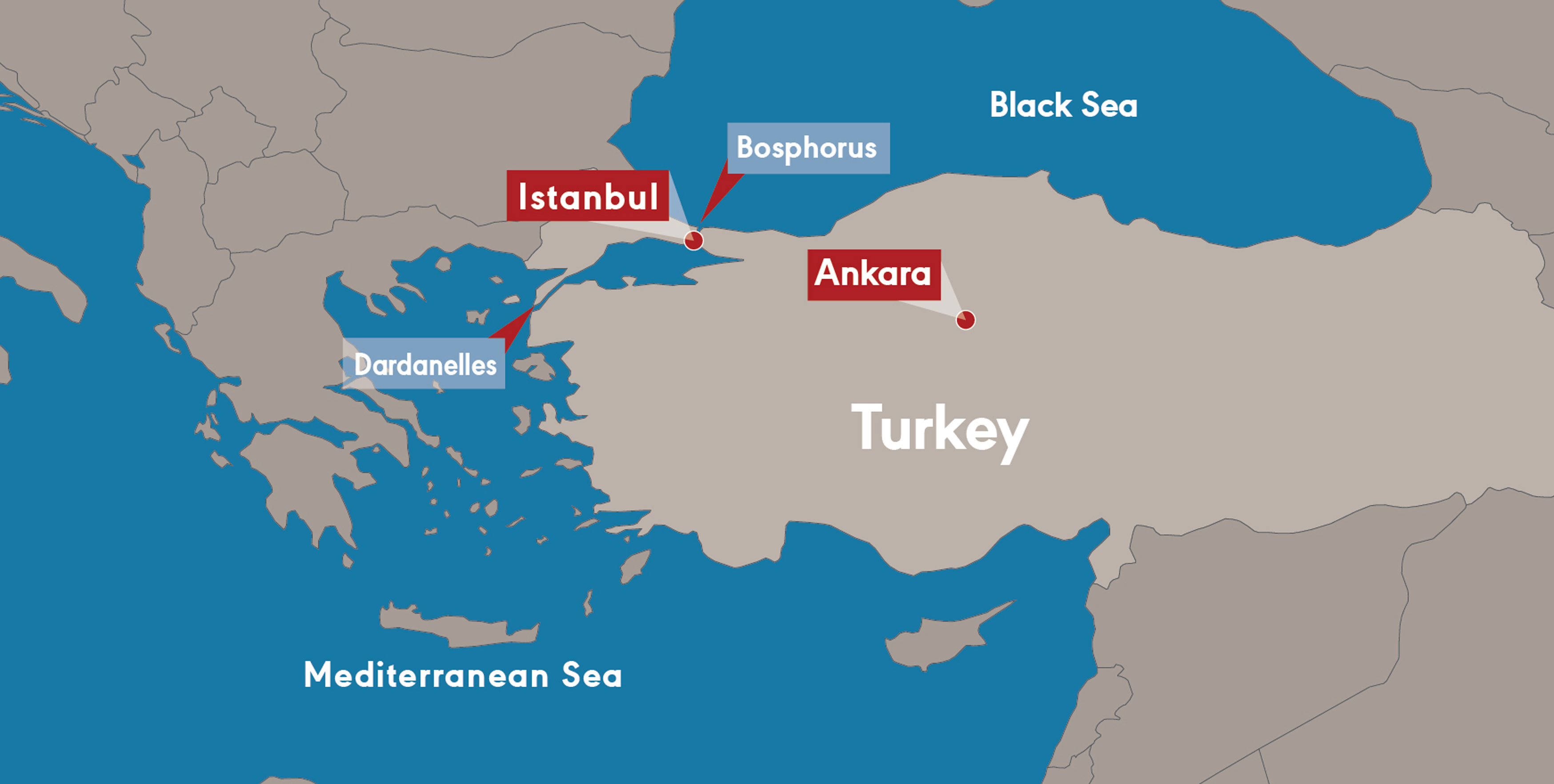 3. Turkish ‘Bayraktar’ drones reputed for participation in Syria and settlement of the armed Azerbaijani- Armenian conflict were sent to the Ukrainian army across the Polish-Ukrainian borders, the thing that Turkey didn’t officially confirm at the zenith of the ongoing operations in order to make up the serious shortage in Ukraine’s supply.

In the view of these three steps and others, observers think twice before evaluating Turkey's attitude of the Russian Crisis as its typical pragmatism may increase this confusion. Before reviewing potential political effects of Turkey's military character in the Ukrainian Crisis, consequences should be clarified briefly in two themes:

Russia is located on the coast of the Black Sea and according to the Montreux Convention signed in 1936; in case of strait close, coastal countries have the right to return their ships to their port where they stay and that reduces restrictions on passage of the Russian ships.

Yet, reduction is subject to ‘technical’ considerations. German Radio Station ’DW’ report published in March 2022 says that any warship that demands return to the Black Sea must be officially registered in the state's fleet of that sea, therefore, Russian warships registered in the North Sea, the Pacific or the Nordic- Baltic have no right to claim crossing the Turkish Strait returning to the Black Sea because it is not their home base.

In bureaucratic sense, Russia can turn around these restrictions by adding its warships to the Black Sea fleet. Anyway, warships returning to the Black Sea coast have no right to participate in the War as the Turkish Foreign Minister Mevlüt Çavuşoğlu said. Therefore, Russia is unable to make up the critical shortage in supply after sinking Moskva, and it would have been possible to recall similar military ships from the rest of the fleets if it were not for Turkey’s restriction.

It is noteworthy that closing Bosphorus Strait to warships is applied to all countries worldwide despite Ukraine's and NATO's demand to only ban Russian warships, but Russia claimed it fears a conflict expansion that may threaten security in the Black Sea. 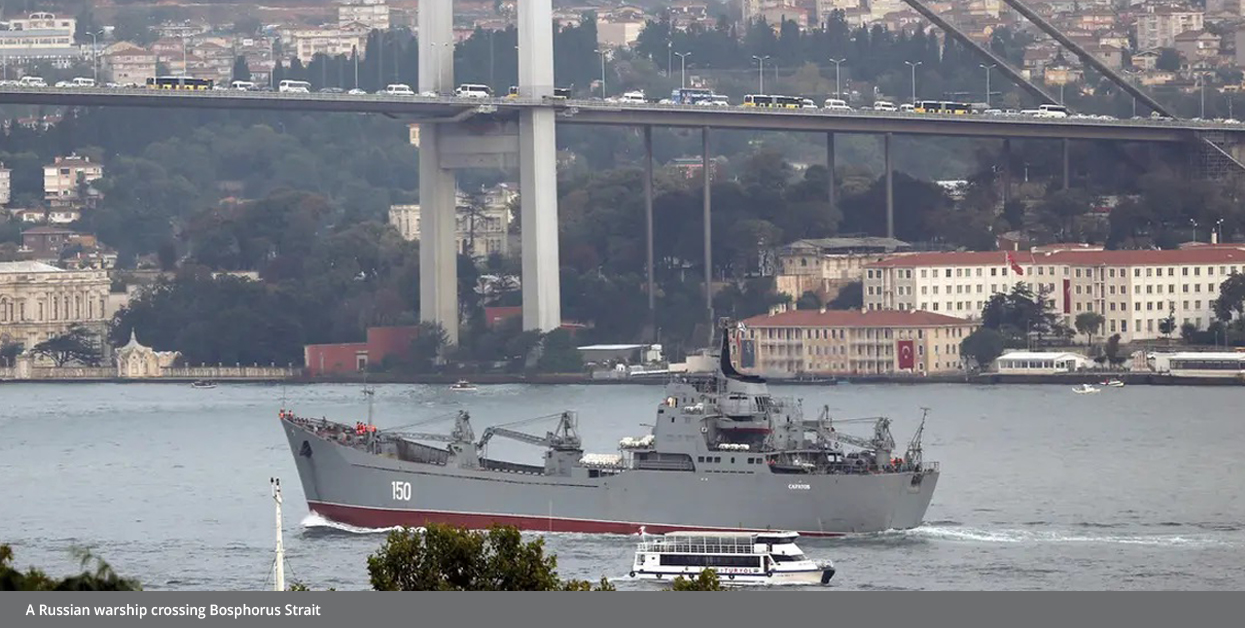 Thus, this could be an advantage for Russia as ‘Russia Today’ reported that military estimates after Turkey's close of straits to warships has technically blocked NATO's besiege of Mariupol coasts. In this context, Admiral and military expert Vasily Dandekin said:"Turkey's closure of the Black Sea has positively served Russia's interests since Russian navy forces efficiently ensure Russia's regional security in the absence of American or British warships and that would save tracking and ultra-focus efforts on their destroyers. Besides, the Black Sea fleet won't face any threats from Turkey, Romania or Bulgaria.

Regarding Turkey's closure of airspace to military and civilian planes flying from Russia to Syria, this was a limited decision and has no effects on Russian planes free move over Ukraine’s spheres.

Bosporus and Dardanelles straits have become of paramount strategic importance to Russia after involving in the Syrian Crisis as they are the solely naval artery for ships flow from the Black Sea to the Mediterranean sustaining Logistic supply for the Russian bases in Syria and guaranteeing quick expansion during crises or keeping with necessary requirements in the field.

Closing Bosphorus strait is assumed to affect Russian military existence in Syria not less than closure effect on naval operations in the Black Sea. Moreover, compared to Syria's distant location that requires transits through many countries, Russia's coastal location on the Black Sea enables Russian military warships to reach Ukraine without passing through other countries.

Nevertheless, Montreux Convention does not give Turkey the right to inspect civilian ships unless suspecting a security threat, which means sensitive military supply in Khmeimim and Tartus may be sent on merchant ships that are not subject to the passage suspension decision of Montreux Convention.

On the whole, it can be said that since Turkey’s closures have not resulted in any harm to Russian supplies, they have no direct strategic effects on Russia's military operations. Moreover, Turkey's military supply of Turkish-made weapons to the Ukrainian army did not shift the balance of power or prove their superiority over Russian weapons or led to imposition of an anti-Russian course as this armament is relatively limited.

However, Turkey's decisions may have political repercussion on files about which Ankara has made previous understandings with Moscow like the Syrian file which observers think it involves high-risked cracking "Status Quo" and shake of the Astana System (understandings between Russia, Turkey and Iran about the Syrian Crisis) and an escalation in many frontlines particularly Idlib in Northern Syria, which is still under control of several armed groups backed by Ankara.

In Sothern Syria, on the other hand, Moscow and Tel Aviv understandings may be affected due to divergence in both countries' attitudes of the Ukrainian Crisis which is shown clear when Russian Foreign Ministry summoned Alex Ben Zvi, the Israeli Ambassador in Moscow to protest against declarations of Yair Lapid, the Israeli Foreign Minister who described Russia's operations in Ukraine as "War Crimes".

Israeli statements and summons of the ambassador in April 2022 undermined Tel Aviv's strive to avoid clear bias to Ukraine within the first few weeks of the crisis in order to maintain free active flight over Syria's airspace.

In case Russia wanted to transcend understandings with Turkey and Israel and reactivate the Syrian file, many countries would encounter security crisis such as Jordan which embedded firm understandings with Moscow regarding the south of Syria. While the aggravated situation in the north surpassed harming Turkey's interests with the start of a new wave of migrations towards Europe which originally endeavours to accommodate Ukrainian refugees.

In contrast, Turkish diplomacy may find a "chance" in the Ukrainian Crisis to re-adjust foreign policy with Europe and the West by zeroing disagreements similar to the first decade of this century which witnessed justified developed rule and a nationwide developmental leap.

In conclusion, Ankara will maintain a mediator role in the Ukrainian Crisis as much as possible, even if it biased against Moscow, because intraregional interactions are of greater magnitude to be sacrificed like "TurkStream ", the Russian gas pipeline passing through Turkey and the increasingly growing trading since Turkey's exports to Russia reached about 4.5 billion dollars in 2020 while Russian imports to Turkey reached 15.9 billion dollars according to "Trading Economics".

It is still necessary to observe Russian-Turkish relations as having great role in defining the features of regions that have a significant geopolitical position in the international politics like Eurasia, the Black Sea and the Greater Middle East.