A quite exceptional American elections

A quite exceptional American elections

Five days after global anticipation of the US election results, Joe Biden announces himself the 46th President of the United States, despite Donald Trump refusal to concede defeat. What do we make of the present political scene in the United States? Will the battle over the most powerful and highest-level executive position continue in Washington? What are the main foreign policy issues facing the next administration? 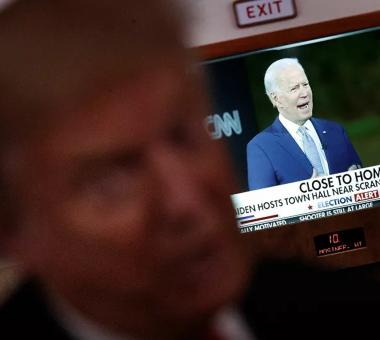 It is now a reality; Donald Trump did not achieve his goal of being re-elected for the Presidency of the United States, particularly after the unofficial announcement of the election results through the major American media. The announcement became official, in some way, given the world leaders’ congratulations to Joseph Biden who declared himself a winner of the event labeled as unprecedented in the country's history in terms of its intensified social and political polarization.

Trump, along with many of his campaign members and supporters, are in denial about what was and is happening. They intend to continue the challenging of the course and outcome of the electoral process at the level of federal courts, taking what they claim to be voter fraud to the Supreme Court. Trump's attorney, Rudy Giuliani, has stated that Trump is not going to concede the victory of his rival Biden - a view supported by the Chairman of the Senate Judiciary Committee, Republican Senator, Lindsey Graham, who says that we must wait until the final results are issued, besides that he supports the filed lawsuits.

It seems that determining the outcome of the US elections at the national level will take some time, not in terms of the official announcement that will be determined no later than next month, but rather at the popular level that is sharply divided over the mechanism of running the country. This requires Biden to contain the opposing voices, by granting Republicans a number of positions within his ministerial cabinet which the American media describe as "the most diverse", including all political and social components. This could give the GOP leaders the idea to move Trump and his narrow circle to accept the status quo and secure a smooth and peaceful transition of power.

Many approach these presidential elections with that in which George Bush Jr. won over Democratic candidate, Albert Al Gore, 20 years ago. For his party resorted to the Supreme Court in Florida for a recount, arguing that the gap was less than 600 votes in favor of Bush, leading the GOP to the Supreme Court which shut down the recount. Nevertheless, this event is largely different, for it is a case in which Joe Biden outmatches his rival in a number of states, including what are traditionally GOP-led, such as Georgia and Arizona. In other words, the Supreme Court’s decision - if it is issued in favor of the recount - will lead the country to a state of uncertainty that will last for a long time disrupting the political process due to disruption that would afflict the executive and legislative branches.

Regarding Biden's policy at home and abroad, the most frequent question is whether he will reintroduce the political methods that prevailed during the presidency of Barack Obama. The answer to this question lies in understanding the events and changes that have occurred during the past four years. For example, there is no doubt that Biden will have a different approach to the health crisis following outbreak of the coronavirus at the local level by stressing the full adoption of public safety measures, and it is expected that the United States will rejoin the World Health Organization from which Trump withdrew.

Biden will work to reform the relationship with the European Union and seek to bridge the views gap between Brussels and London regarding Brexit, not to mention the relationship with NATO and its role with regard to security and military global issues. Going hand in hand with this is the form of the relationship with Russia and the American re-engagement with the issue of Belarus in Eastern Europe, Kyrgyzstan in Central Asia, the Armenian-Azerbaijani war – all of which are issues that, as a whole, are part of the Russian vital sphere - in addition to the need to unveil the uncertain future of the Treaty on Strategic Offensive Weapons, START 3, which, if not renewed, would be invalid at the beginning of next year.

Will Washington under Biden take a hard line against Russia just as Trump did with China? This question demands extensive research; however, it can be answered briefly by indicating that Biden team is going to deal pragmatically with international actors until the US foreign policy is restored to the correct path, which, as they believe, is to show the United States as standing at the same distance from all parties. Thus, the United States could be at the stage of redrawing the axes at the international level, which does not necessarily mean contributing with a new approach to Beijing that would be very different from the Trump administration's approach.

The Middle East also has many issues that must be dealt with: the stalled peace process between the Palestinians and the Israelis, Syrian crisis developments, the war in Yemen, Turkish influence in the region in general and in the Mediterranean basin in particular, the Gulf crisis, with -on top of them- the Iranian file which continues to escalate tension in the region, in addition to other issues necessitating urgent solutions that, according to some observers, will be presented by Biden administration from the perspective of pushing the dialogue processes forward instead of imposing final unilateral solutions.

In conclusion, it is necessary to remember time after time that the study of foreign policy under the various American administrations must take into account that social currents, with the economic interests they represent, play a central role in determining the foreign behavior of the United States. Therefore, attention in Biden era will continue to be paid to the internal affairs for the sake of bridging the social chasm, in parallel with a cautious reform of foreign relations, in order to reach a point of intersection between domestic and foreign affairs.

* Before the US presidential elections, Strategiecs team published a set of reports tackling economic, political and cultural aspects resulted during Trump's stay in the White House, with reference to the impact of these aspects on the electoral process in general. Readers can access these reports from here.