A Glimpse into the Libyan Economy after Political Consensus

A Glimpse into the Libyan Economy after Political Consensus

Almost a decade after political and security instability, a new Libyan government was formed in March 2021 as a result of a UN-sponsored dialogue between political parties. It is self-evident that the political agreement, which some describe as non-solid, is not the last knot untied in the local Libyan conflict, especially in light of the large and complex economic challenges facing the State of Libya, to which this article is trying to give highlight.

Libya’s new government was formed on March 10th, 2021 under Prime Minister Abdelhamid Dabeiba after years of political and security instability and the accompanying intervention by regional and international parties that have complicated the public landscape and blocked the way to a solution – a situation with which interim political understandings such as the 2015 Skhirat Agreement and the resulting UN recognition of the Presidential Council of the Government of National Accord led by Fayez al-Sarraj had not work out. Regionally backed infighting continued, taking the economic and social situation to a critical   situation, and the conflicting parties were drawn to political consensus for fear of exacerbating the restlessness that had plagued each party's grass-roots as a result of poor living conditions.

Following this political agreement, the IMF predicted in its latest report on the prospects for the global economy that Libya’s economy will grow by 5%, following the poor performance in 2020 due to low global oil prices owing to the economic repercussions of the Covid-19 pandemic.

After the signing of the ceasefire agreement in October 2020, Libya’s oil production began to gradually recover. The Libyan National Army (LNA) lifted its hand from the oil fields it controlled, the Libyan National Oil Corporation then announced the lifting of the force majeure on the oil fields in the east of the country. This was preceded by the army's agreement with the Corporation in September 2020 to resume oil exports within a clear and transparent mechanism under which revenues will be distributed fairly to various regions while ensuring that they do not reach the hands of armed parties and foreign fighters. Libya's daily oil production in March was 1,283 million barrels.

It can be said that the oil industry contributed to the political solution, as the oil production fell to less than 100,000 barrels before January 2020, taking the country into a state of extreme distress that accompanied a state of institutional conflict and the emergence of parallel entities. For instance, parallel to the government of reconciliation, there was the government of Abdullah Al-Thani in the east allied with the Libyan National Army led by Khalifa Haftar, but the two executive powers failed to meet popular demands for a minimum of services and a decent life. Thus, the option of returning to oil production seemed logical given the availability of the necessary resources, as Libya has the largest oil reserves in Africa.

Libya's economy is expected to improve this year as oil imports, which accounts for 95% of the country's general imports, return to flow into the state treasury. Concerns remain, however, as the political consensus between the opposing parties is not guaranteed, and it is true that the oil markets at the global level are going through a period of stability that tends  to increase  - the price of a barrel of Brent crude has not fallen below  $64  since mid-April  -  but the stability of global demand at a certain point is relative to the nature of the situation and its decline means the turmoil of the Libyan economy; largely because of its heavy dependence on the oil industry. Not to mention that it is not guaranteed that Libya will continue to be exempted from OPEC+ production reduction agreements because of its great need to raise its production level, and not to be required to engage in at least a small reduction in case global oil demand is reduced again for any reason.

However, the situation will remain volatile, since the main complication is the lack of diversity in the production base of the Libyan economy. This was manifested by the Minister of State for Economic Affairs of the Dabeiba government, Salama al-Ghweil, when he told the media that diversifying sources of income is among the only hopes to unite the Libyan people in the face of economic challenges and achieve sustainable development.

The economic challenges go beyond the issue of dependence on oil as a major resource, as well as the dilemma of maintaining security stability in order to attract foreign investment with difficult currency. For Libya also suffers from the lack of transparency and integrity of the financial system. So far, there are two branches of the central bank, the first in Tripoli and the other in Al-Bayda, despite al-Ghweil's talk in mid-May 2021 about the date of the unification of the central bank in order to restore the remaining confidence in the Libyan financial system. This confidence-restoring process was initiated by the United Nations Support Mission in Libya in collaboration with Deloitte UK, the world’s largest consulting and accounting services company, which has launched an audit of central bank branches since August 2020 to collect and integrate the country's highest cash institution that was divided in 2014.

The government of national accord and its supporters have long accused officials in the eastern regions of the country under Haftar's influence that the transfer of the Central Bank of Libya to Benghazi has had serious consequences for the management of monetary and fiscal policy and the economic situation in general. This is due to the infusion of large quantities of Libyan dinars estimated at 4 billion dinars printed in Russia to the market, according to a 2020 UN study entitled "An Introductory Study on the Status, Challenges and Prospects of the Libyan Economy,” the matter which resulted in inflation and devaluation of the currency compared to other local currencies. In return, the government of national accord was accused of using central bank funds to support armed groups and pay for foreign fighters, not to mention cases of widespread corruption at the bank and other administrative structures in Tripoli. The mutual accusations do not deny the fact that there is corruption affecting public money and the country's economy, which must be dealt with to resolve the conflict, according to former UN envoy Ghassan Salameh.

However, the fact that the monetary system had been disrupted and that it had disastrous consequences for the economic situation was not overshadowed by the exchange of accusations. For example, in 2020, the total amount of public debt was $60 billion i.e., 260% of GDP, according to data from the Central Bank of Libya in Tripoli, which was certainly accompanied by currency depreciation, local capital flight and reduced state solvency. 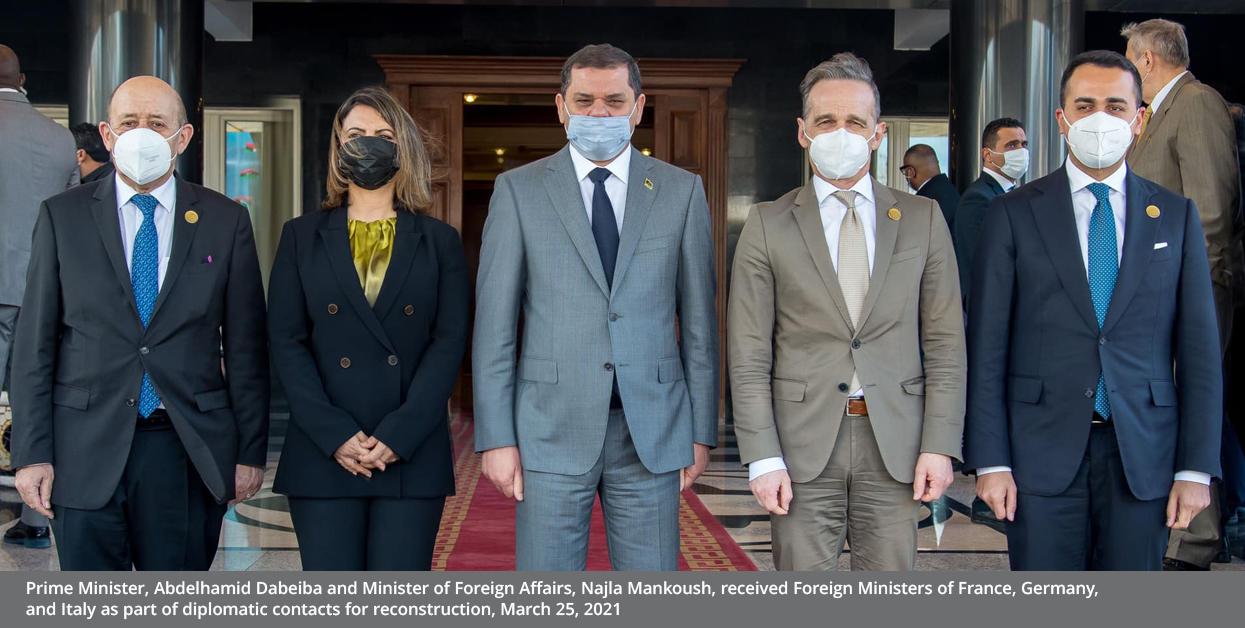 A glimmer of hope

The political consensus came in the wake of ordering economic papers. As we mentioned earlier, it was agreed to return to oil production, and the Central Bank set the exchange rate of the dinar at 4.48 against the US dollar at a consolidated meeting of its board of directors. Before that, there were two exchange rates, one of 1.4 dinars against the dollar for official uses, and the other of 3.9 dinars for the daily needs of citizens.

Although security tensions between the east and west of the country remain (which means the disruption of local trade), the calm of the general regional atmosphere primarily indicated by the reduction of the escalation between Egypt and Turkey, which have been directly and indirectly involved in the Libyan conflict, in addition to the gulf, Arab and European interest in participating in the reconstruction of the country suggest that the future may be heading towards stability.

The new government's response to the requirements of the next phase can also be described as good. In April, the Libyan Ministry of Finance established a $50 billion reconstruction fund over three years as a first phase, with all official financial contributions in the form of allocations from the Libyan, domestic and foreign budgets.

It is undeniable that the specter of tension and security conflict could return to Libya at any time unless the living conditions of citizens are improved and security control is centrally extended to the entire Libyan territory. The Libyan leadership should also be well aware of the need to balance the interests of regional and international actors wishing to invest on Libyan territory because of its huge resources and its distinct strategic position; for avoiding choosing one party over another f would ensure stability and accelerate economic development.