Islamic Jihad: A Time Bomb in a Fragile Reality

Islamic Jihad: A Time Bomb in a Fragile Reality

This paper provides an interpretation for the reasons of the Israeli escalation against Islamic Jihad in the West Bank and Gaza Strip and assesses the repercussions of that escalation.

The Palestinian territories witnessed a major Israeli military escalation against the Islamic Jihad movement in August 2022 concentrated in the city of Jenin and its camp, as well as the Gaza Strip, where a senior leader of Islamic Jihad, Bassam al-Saadi, was arrested after being injured. A group of military leaders and activists were assassinated in a series of Israeli bombardments targeting the movement in the Gaza Strip in response to rockets fired at Israel by the Jerusalem Brigades, the military wing of Islamic Jihad movement, before the announcement of a ceasefire between the two parties. Because the Israeli escalation was clearly initiated against Islamic Jihad, it is important to highlight the causes and repercussions of this escalation.

The reasons behind the Israeli escalation against the Islamic Jihad movement are concentrated in a set of subjective features that characterize the movement and in the objective conditions surrounding it, the most important of which are:

The idea of Islamic Jihad arose in the context of religious revolutionary atmospheres, antagonizing Israel and the United States at the end of the seventies and early eighties of the last century: the Islamic Revolution in Iran in 1979, the 1981 assassination of Egyptian President Anwar Sadat, the emergence of the name of the organization Jihad and Islamic Group in Egypt in 1981, and the ensuing violent bombings that targeted French and American forces in Beirut in 1982 and 1983 which Islamic Jihad, linked to Iran, claimed responsibility for.

The idea of a Palestinian Islamic Jihad, which carried the same name, developed within the same contexts, yet differed from the Muslim Brotherhood, which fully participated in the Afghan-Russian war after 1979, the declaration of jihad against the former Soviet Union, and the recruitment of young Arabs to that battle.

Second: The Method, and the Difference and Dispute with the Muslim Brotherhood

Islamic Jihad’s intellectual theses were characterized by sharp criticism to the Muslim Brotherhood’s reformist approach, where Islamic Jihad adopted a revolutionary approach in change, an approach that reflected on the movement’s vision of reality, its political positions and its organizational structure, and brought it closer to the paramilitary group that adopts methods of covert work, unlike the Muslim Brotherhood, which has a public and institutional proselytizing character.

Third: the Position from the Islamic Revolution and the Relations with Iran

Dr. Fathi Shikaki, founder of the Palestinian Islamic Jihad (PIJ), was greatly and clearly influenced by the success of the Islamic Revolution in Iran, and he considered it an ideal model to follow. His 1979 book, “Khomeini: The Islamic Solution and the Alternative,” was published in Cairo four days after the success of that revolution. The book’s idea—extending the revolution to include liberating Palestine—later evolved to control the strategic relationship between PIJ and Iran, a relationship that goes beyond financial, military, and political support to include considering the PIJ movement as the most important arm of Iranian policy in the Palestinian arena apart from sectarian considerations. This was an advantage important to the PIJ movement, especially in comparison to the sectarian character of Iran’s other proxies in Lebanon, Iraq and Yemen, for example. 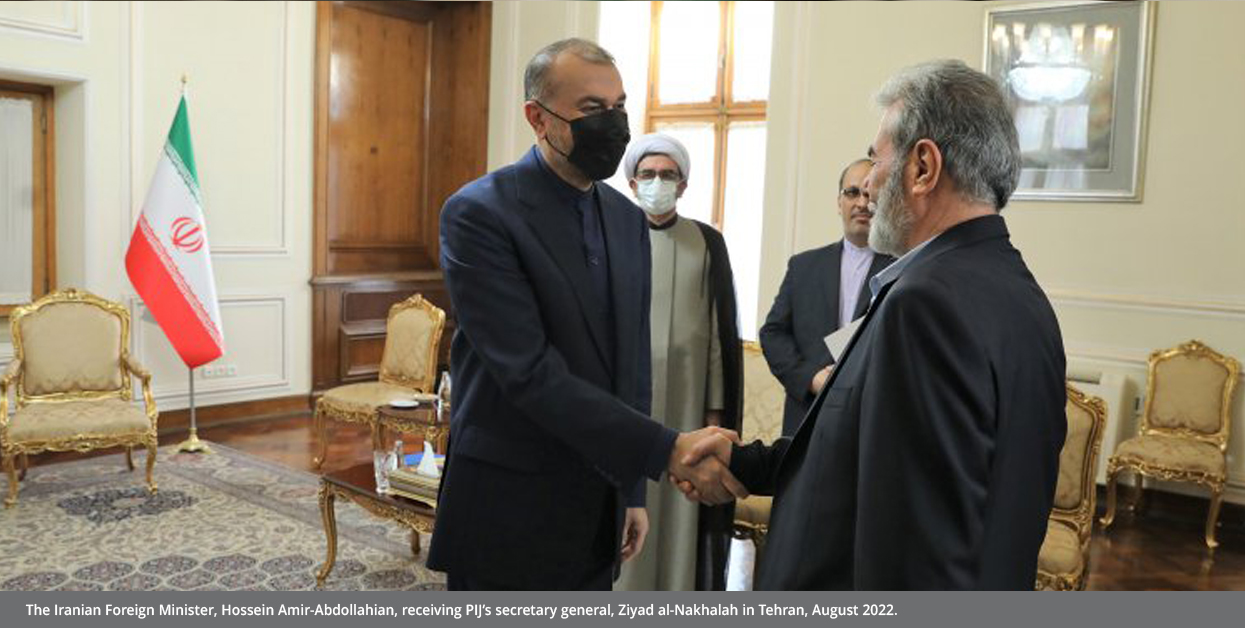 Fourth: The position on the Palestinian Cause

Unlike the rest of the Islamic groups that preceded it—the Muslim Brotherhood, Hizb al-Tahrir, and the Salafi groups—Islamic Jihad considered the Palestinian cause its central issue, even the central issue of the Arab and Islamic nations. Based on that vision, the priority was in the movement’s practice of fighting against Israel and for the liberation of Palestine—not to Islamize and reform society, as the Muslim Brotherhood calls for. Nor was it to resume Islamic life by establishing a caliphate state as called for by Hizb al-Tahrir. Islamic Jihad’s distinct position emerged systematically and clearly in the early literature of the movement with Shikaki’s 1989 book, “Prologue Regarding the Centrality of Palestine and the Contemporary Islamic Project.”

Fifth: The Position from Fatah and Palestine Liberation Organization

Despite the critical theoretical position, both intellectual and political, of the PLO and Fatah as intellectually secular bodies and their consistency with settlement projects from a political point of view, Islamic Jihad discourse was not confrontational, takfiri, or accusatory to the PLO and Fatah. Nor did Islamic Jihad present itself as a political alternative to them. Rather, there was cooperation and coordination between Fatah and al-Jihad al-Islamic regarding the Fatah’s Jihad Brigades and in conducting joint operations in the mid-80s, contrary to the position of other Islamist groups, especially the Muslim Brotherhood, whose relationship with Fatah and PLO was characterized by tension and clash even before the establishment of Hamas in 1988. This was further exacerbated after the establishment of Hamas, which presented itself as a political alternative to the many bloody conflicts with Fatah that culminated in the events in the Gaza Strip in 2007 and the subsequent Palestinian political division that continues to this day.

Despite Islamic Jihad’s positive attitudes towards the Iranian Islamic Revolution and its symbols, and despite the strategy of relations between it and Iran, the Islamic Jihad movement maintained a non-sectarian discourse while being keen to show its “Sunniness.” This enabled it to withstand in Palestinian society as well as face campaigns of accusations of Shiism by other Islamist groups, especially the Muslim Brotherhood and Salafists. This constituted a strong point in favor of the Jihad Movement and its Iranian allies.

The organizational structure of the Islamic Jihad movement is somewhat secretive in nature. It is basically a relatively small organization not linked to a network of syndicates or social and mass institutions, unlike Hamas, for instance. Islamic Jihad’s extension regarding syndicates is limited to its student framework known as the Islamic Group. In addition, the movement accumulated a lot of military expertise, especially in the Gaza Strip, and established an armed military arm, al-Quds Brigades, that benefited from the support of Iran and its allies, such as Hezbollah, both financially and militarily.

This characteristic of Islamic Jihad greatly alleviates its financial and administrative burdens, freeing it from the pressures of Israeli escalation and obligations to citizens linked to networks of social institutions, thus lessening the movement’s burdens and allowing it to concentrate its efforts in the organizational and military spheres to a large extent.

Eighth: Attractiveness for the Youth

The militarized character of Islamic Jihad and its weapons are attractive to the new generation of young Palestinians within a society that celebrates individual heroism. This was largely demonstrated in the experience of Islamic Jihad in the Jenin area of the West Bank, whether through the central role in establishing the Jenin Brigade or raising the slogan “Unity of Arenas.

The attractiveness of Islamic Jihad to the Palestinian youth is a major concern for Israel and the Palestinian Authority, especially since it appeals to a youth audience deemed to be pro-Fatah, even by some elements of the Palestinian Security Services. This concern is increasing with the growing likelihood that this phenomenon will spread from Jenin to the rest of the Palestinian areas in the West Bank.

The sum of these reasons and their interaction of subjective features and objective conditions largely explain the state of Israeli escalation against the Islamic Jihad movement. In light of this analysis, Islamic Jihad is a time bomb in a fragile reality. It is the only Palestinian organization that remained acting outside of political understandings between the elements of the Palestinian-Israeli conflict. In addition, it is strategically linked to Iranian policy, capable of undertaking conceptual confusions in the Palestinian arena, especially since that arena is experiencing a critical stage and is likely to witness confrontations in a state of chaos since the future of the Palestinian Authority leadership is not guaranteed post-Mahmoud Abbas, its current president.

However, the Israeli escalation against Islamic Jihad, in light of the Palestinian Authority’s silence in the West Bank and the neutrality of Hamas in Gaza, will not be isolated from possible repercussions if such escalation were to continue. The continuation of that escalation, especially through assassinations of the movement’s prominent figures and field leaders, may accelerate the state of confrontation in a highly tense situation. It may also open the door to the possibility of a comprehensive security collapse that will not stop at the borders of the confrontation between the Israeli army and Islamic Jihad militants.