Oman’s reluctance to sign the Abraham Accords or a similar agreement stems from its commitment to the “Omani approach” of neutrality and noninterference in dealing with the regional conflicts. 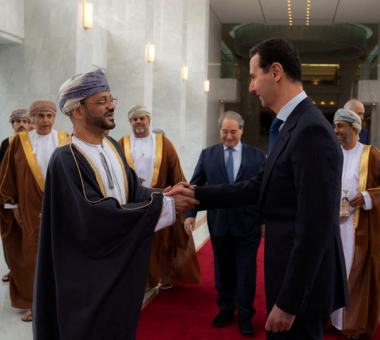 Yet a few days after receiving a call from the new Israeli foreign minister after the June 2021 election of Prime Minister Naftali Bennett, Omani Foreign Minister Sayyid Badr al-Busaidi flatly declared, “We will not be the third Gulf state to normalize” relations with Israel. The fundamental reason for the sultanate’s refusal is twofold. First, Oman wants to maintain its role as an island of neutrality in the often-turbulent sea of Middle Eastern conflict. Second, as Badr explained to Israeli Foreign Minister Yair Lapid during their phone call, Oman is waiting for Israel’s new government to take the first step toward creating a Palestinian state with east Jerusalem as its capitol.

Despite this, Israel remains optimistic. A foreign ministry official predicted last October that Oman will be the next Arab country to join Abraham Accords. “With Oman,” Eliav Benjamin, the head of the foreign ministry’s bureau of the Middle East and Peace Process Division, told The Jerusalem Post, “we have ongoing cooperation and plans.”

Oman’s reluctance to sign the Abraham Accords or a similar agreement stems from its commitment to the “Omani approach” of neutrality and noninterference in dealing with the regional conflicts. The Switzerland of the Middle East, Oman has never broken off any diplomatic relations with any country. 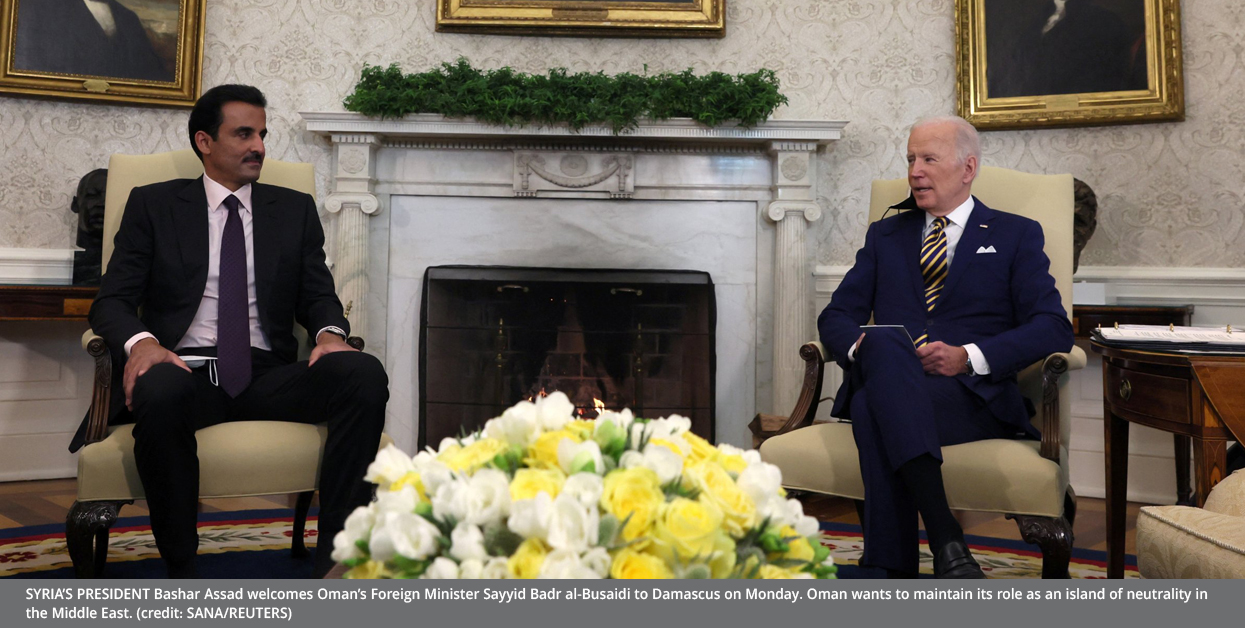 For instance, Oman was:

• one of only two Arab League nations, along with Sudan, not to boycott Egypt following its peace treaty with Israeli in 1979;

• the only Gulf Cooperation Council member to remain neutral throughout the 1980–1988 Iraq-Iran war, Oman hosted secret cease-fire talks in Muscat during the war;

• the only Gulf Cooperation Council (GCC) member to maintain diplomatic relations with Syria;

• the first Arab Gulf state to host an Israeli leader, then-Israeli prime minister Yitzhak Rabin, in honor of the 1994 Israeli-Jordanian peace treaty and when Rabin was assassinated by an Israeli right-wing extremist in November 1995, Omani foreign minister Yusef bin Alawi attended his funeral;

• the only GCC member to not join the Saudi-led military campaign against Yemen’s Houthi movement of Shi’ite rebels backed by Iran;

• and, lastly, the only Arab Gulf country to conduct military exercises with Iran; the Omani navy engaged in a joint naval drill, the ninth of its kind, December 2021 in Iran’s territorial waters in the Strait of Hormuz and the Sea of Oman, which borders Iran and Pakistan on the north, Oman on the south and the UAE on the west.

MAINTAINING ITS unofficial relationship with Israel has served Oman’s continuity of neutrality and reassures the Omanis that, despite the death of their beloved Sultan Qaboos bin Said Al Said, who ruled the country with vision and wisdom for five decades, it is still possible for the sultanate to maintain the stability and principled nature of Omani foreign policy. Oman’s repeated insistence that any agreement with Israel must be preceded by Israel’s approval of the Arab Peace Initiative, proposed by then-Saudi crown prince Abdullah in 2002, has been unwavering.

Though a formal normalization between Israel and Oman would provide tremendous economic benefits to both countries, the precipitous drop in oil prices and the economic crisis it created have, inexplicably, made incentives for investment, diversity, tourism and Israeli technology less attractive to the sultanate that believes its economy is better served in Iranian investments.

Over the years, Muscat – Oman’s port capital – has managed to maintain a careful balance between its geopolitical ties with countries on both sides of the Persian Gulf, particularly Iran and Saudi Arabia. The sultanate has long enjoyed a beneficial relationship with Iran. The late sultan Qaboos cherished its advantages and his successor, Sultan Haitham bin Tariq Al Said, beloved by his people, is following the same path.

This, of course, makes any agreement with Israel along the lines of the Abraham Accords out of the question. The unofficial relationship between Oman and Israel has always irritated and worried Iran. Should it become official, Tehran will undoubtedly feel a direct threat to its national security and most likely sever its close bonds with Muscat.

The importance of Oman’s role in the region, along with its influence and effectiveness in resolving disputes, cannot be denied. The sultanate has always been an acceptable mediator and active player on the diplomatic scene between all the conflicting groups in the region, especially the Israelis and Palestinians as well as the Americans and Iranians. Therefore, no one can deny that the refusal of the Omani leadership to sign a peace agreement with Israel extends beyond pragmatism to strategy.

Regardless of how much Oman applauded the decision of other countries to sign peace agreements with Israel, it will not follow their example – at least in the short run. From a pragmatic standpoint, maintaining its current relations with both Israel and Iran makes sense. However, will this decision remain strategically advantageous, given the escalating tensions between Iran and Israel, Iran’s support of radical militias, its expansionist goals, its recalcitrant stand in the nuclear talks and its rapidly developing nuclear program?

Not likely. I believe the Omani approach will sooner rather than later prove to be untenable for both Israel and Iran. Israel views Oman as too pragmatic, especially when it comes to the escalating confrontations between Iran and Israel. Therefore, the Israelis might take a tougher stance towards the sultanate and demand greater decisiveness, which will be largely determined by the result of the Vienna negotiations.

THE ROLE that Oman continues to play in negotiations with Iran regarding its nuclear program will not grant it immunity from Iran’s goal of imposing its hegemony on all countries of the region. Oman represents a wide and extended strategic depth that Iran seeks against Saudi Arabia, the UAE, Bahrain, Kuwait, Jordan and Egypt. Therefore – as it has already done in Syria, Iraq, Lebanon and Yemen – Tehran will try to extend its influence through one of the many Shi’ite sects it uses to fulfill its goal of domination. In Oman, Iran’s surrogate force are the Ibadi movement sympathizers.

Although this possibility is somewhat unlikely – especially if an agreement is reached in Vienna – it will become certain if Tehran acquires nuclear weaponry. If Iran joins the nine-member club of nuclear nations, Oman and direct control over it will become a top priority for Tehran due to its geostrategic importance in the region. If this happens, the careful balancing act required by the Omani approach will, God forbid, topple and crash.

Although it seems overly pessimistic, this scenario is both possible and probable. Its effects will ripple like the shock wave of a nuclear blast across every country in the Middle East. As a practical matter, the other Arab Gulf nations cannot afford the loss of another country to Iranian influence.

Therefore, it is urgently required that Arabs increase their investments in Oman, especially after the financial losses it suffered from the coronavirus pandemic and the oil crisis. Oman needs these investments to help to expand its economy and reduce high unemployment, especially among its young. A youth with a promising career and a steady paycheck is not so easily enticed to join an Iranian-backed militia. As a practical matter, unemployment and an insecure future did more to fuel the growth of militias in Yemen, Iraq, Syria and Lebanon than any jihadist enticement.

Yes, signing a formal peace treaty with Israel will bring Oman the much-needed benefits of economic diversification and expansion of trade, commerce, technology and transportation avenues that Israel offers. And, yes, Israel will earn billions in the process. But it will also help Oman get in front of the dangerous curve that lies ahead of it with Iran. Oman needs to reconsider its decision not to join its neighbors in signing the Abraham Accords before Iran’s ambitions of domination and expansionism force the sultanate to make critical and reactive decisions in haste.

As the wise and beloved sultan Qaboos once noted, “The path we have followed in our foreign policy over the past decades has shown itself to be both sound and effective, with God’s guidance. We are committed to this approach, which supports justice, peace and security, and tolerance and love; which calls for international cooperation in order to reinforce stability, promote growth and prosperity and tackle the causes of tension in international relations by producing just and permanent solutions to critical problems; which fosters peaceful coexistence between nations; and which generates well-being and prosperity for the whole of mankind.”

Now, as sultan since January 2020, it is Sultan bin Tariq Al Said Haitham’s turn to honor his Arab nationalism by working with his neighbors to safeguard the security and independence of both his country and theirs as we face the complex changes that challenge our region. All that is needed is the stroke of a pen to smite Iran’s sword of Damocles.