Amid growing concern about inflation, its national debt is more than $30 trillion. Its infrastructure is crumbling. White supremacist, anti-government and other violent right-wing groups are growing.

As the world stands at the brink of what UK Prime Minister Boris Johnson has warned will be “the biggest war in Europe since 1945,” what is the state of the United States of America?

One of the oldest tactics to subvert one’s enemies it to divide and conquer. Enemies of the United States, however, do not need to employ the “divide et impera” maxim attributed to the father of Alexander the Great, Phillip II of Macedon. They can simply sit back and watch as an increasingly Divided States of America devolves into a hollow shadow of its former self.

Weakened and split asunder by a pandemic, polarized politics, crumbling democratic norms, violent race wars, cultural wars, regionalism and an ever-widening division between the rich and the poor, just about the only thing uniting Americans today is their collective loss of faith in their institutions, government, political system and mainstream media. An agreement of this assessment is what also unites America’s horrified allies and gleeful enemies.

America is a hot mess. Amid growing concern about inflation, its national debt is more than $30 trillion, $8 trillion of which is owed to foreign countries. Its infrastructure is crumbling. White supremacist, anti-government and other violent right-wing groups are growing stronger and larger in number. Its trust in mainstream media has dipped to second-lowest on record, according to a recent poll showing 29% of Americans have “not very much” trust and 34% have “none at all.”

More alarming is the erosion of democracy in America. Democracy dies in darkness, declares the front page of The Washington Post — but it also dies in doubt and disbelief. Freedom House’s 2021 report, “Democracy under Siege,” highlighted an 11-point decline in its democracy score for the US over the past decade, the steepest ever. Even staunch US allies are starting to notice America’s “Do as I say, not as I do” hypocrisy regarding US democracy, which 64% of Americans believe is “at crisis and at risk of failing.”

Political candidates see the other not as opponents but as enemies, while elected officials from both sides of the aisle are seen as working for their parties rather than what’s best for their country and constituents. American politics have become so radicalized that 30% of registered Republicans agree with the statement, “Because things have gotten so far off track, true American patriots may have to resort to violence in order to save our country.” And almost 40% of the entire country do not trust the 2020 election results. 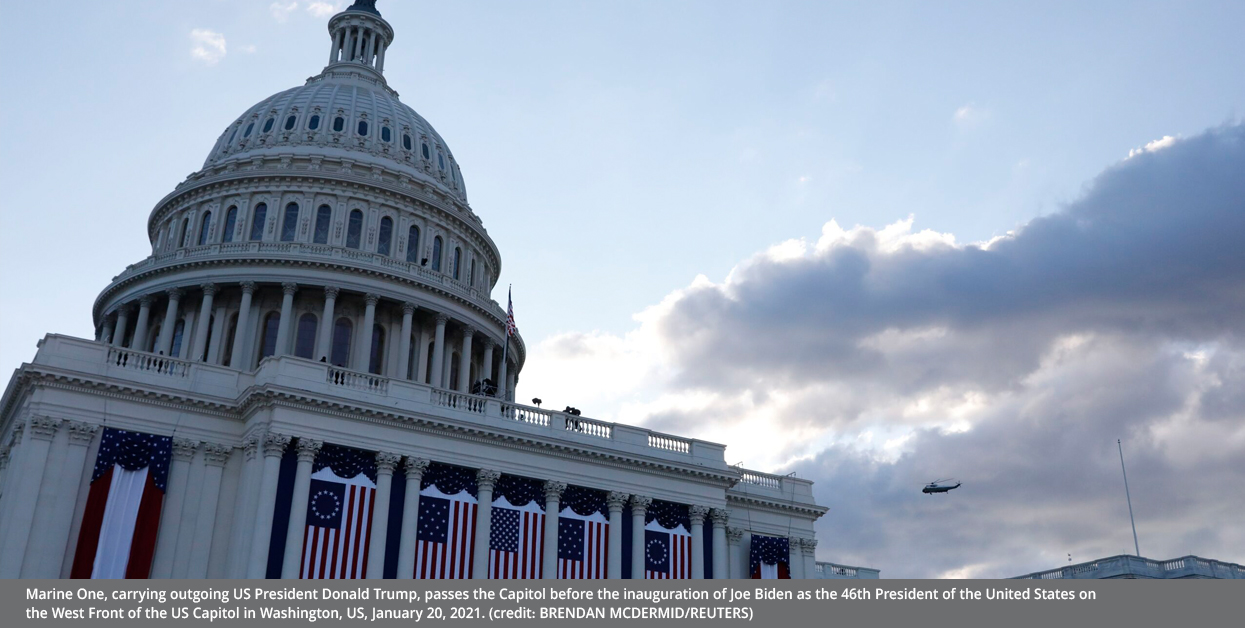 The sloppiness and inconsistency with which America conducts its domestic and foreign policies is also alarming. Although the United States is likely to keep its superpower status, it has already lost its reputation as a dependable and consistent ally. The failure to manage relations with its allies is most evident in the Middle East.

The Trump White House, for instance, established strong relations with both Saudi Arabia and the UAE while expressing clear reservations towards Qatar. The minute Joe Biden took office, however, the White House directed the State Department to focus on Doha at the expense of the other Gulf capitals. Likewise, Biden reversed the Trump administration’s designation of the Houthis in Yemen as terrorists, which the Houthis celebrated by launching missiles at Saudi Arabia and the UAE.

More disturbing than the foreign policy flip-flops is the US failure to implement them due to a lack of integrated civil-military strategy based on long-term civil and security goals.

Without any clear achievement of its goals, America invaded Iraq in 2003 to destroy weapons of mass destruction that didn’t exist, waged a war there for the next eight years, left, handed over Iraq to Iran, and then returned for another war that killed 100,00 civilians and left Iran the only victor.

After America helped overthrow Libyan President Muammar Gaddafi in 2011, the country devolved into a failed state embroiled in endless civil war. The Taliban last year surged back to power in Afghanistan two decades after US-led forces toppled its regime in what led to the US’ longest war.

In Syria, which the West handed over to Russia and Iran on a gold plate, most of the decisions made during the Obama administration did not prevent the country from sliding into a civil war that has not yet ended.

And the list goes on, ending in America’s inability to resolve the Iranian nuclear issue. I think, as do many in the Middle East, including Israel, that Iran has already acquired nuclear weapon capabilities. Therefore, a signed agreement will not be worth the paper it is printed on.

Iran’s symbolic animal is the Asiatic lion that once roamed proud and free across the whole of the Middle East before facing near extinction. Iran is breeding nuclear weapons just as surely as it is breeding a pair of the lions sent to it from zoos in Britain and Ireland — and for the same reason: to become king of the region.

If the US believes that its role in the Middle East suffers from certain mistakes and problems, then the reaction should not be to withdraw but to reconsider, develop, correct and improve it. This will ensure a greater level of influence for the US, and stronger relationships with its allies in the region.

Granted, it is optimistic, but I argue that the so-called decline of American involvement in the region is not entirely accurate. Allies accustomed to America having a greater and more direct role see a “decline” as opposed to a renewal of strategy and reshaping of its approach to the region. That the decline is imagined does not render it any less real. What is imagined in politics plays the same role as what is real — and may even exceed it in some cases.

Middle East allies have become increasingly concerned that the great power that has always stood by them is leaving them alone in a region that has become more polarized, chaotic and dangerous than it was before American intervention. This is prompting regional leaders to act more independently as they reevaluate their alliances.

To reduce dependence on the US, they are already building bridges with other nations and partners, including Russia and China. Russian President Vladimir Putin has made two successful visits to Saudi Arabia and the UAE, where many bilateral agreements were signed. Both nations have notably stayed neutral regarding Russia’s war against Ukraine. Syria, meanwhile, recently joined its neighbors as a member of China’s Belt and Road Initiative of trade routes and agreements involving 148 countries in every continent across the globe.

Any changes made by these Gulf leaders are justified, even expected and inevitable. Particularly since many powers, including the Chinese tiger and Russian bear, have a lot to offer, and do not hesitate to demonstrate their willingness to fully engage in the region’s issues, working together to limit their negative effects and perhaps find final solutions.

Many argue that a strong America is needed now more than ever. Others argue that it needs to downsize its expectations for what it can do abroad while strengthening its domestic and democratic foundations. All agree, however, that its repeated mistakes have been – and will continue to be, unless corrected – free gifts to China, Russia and Iran.

Look east, America. The Chinese tiger, Russian bear and Iranian lion are escaping their cages and may devour you. Or you may just do it yourself if the Republican and Democratic parties do not return their focus to what’s in the best interests of America and the world rather than the best interests of their own party and the next election.