The Muslim Brotherhood in Jordan: Regional Role and Transnational Ideology

The Muslim Brotherhood in Jordan: Regional Role and Transnational Ideology

The paper aims to analyze the role of transnational ideology, in the partisan and political practices of the Muslim Brotherhood in Jordan, and its implications for the group's regional role, whether in its relations with the group's branches in Egypt, Syria, Palestine, or in some regional countries, such as Iran and Turkey.

This paper is part of the series: Political Islam in Focus

Since its founding, the Muslim Brotherhood in Jordan was aware of how mandatory and important it is to provide the support and services to the group's branches, in the Arab world and other Islamic models. This message has become notable for the group during historical periods, during which the approach of regional events and courses were separated from the official position. The Muslim Brotherhood adopted narratives defined by partisanship and ideology, in order to achieve political objectives, the matter which had a significant impact on Jordan's foreign policy, and in its relations with different countries.

In this paper, a narrative and descriptive framework will be focused on, in order to demonstrate the foreign trans-geographical influence of the Muslim Brotherhood in Jordan, that defines their goals, objectives, and agenda. In addition to focus on the reasons for alerting against the risks associated with their activities, particularly in the recent times.

Through this introduction, the Muslim Brotherhood's relations in Jordan and Egypt are dated back to the group's emergence in Jordan 1945, due to overlapping positions and personal relations between the two parties. The group's founder in Jordan, Abdul Latif Abu Qura, served as a member of the founding body of the parent group in Egypt. And the former observer general of the Muslim Brotherhood, Mohammed Abdul Rahman Khalifa, occupied the position of the spokesman for the International Muslim Brotherhood Organization.

From the 1940s to the 1990s, the Muslim Brotherhood in Jordan emerged as one of the most important and powerful organizations among the group's branches. This is because the group's branches in Egypt and Syria were weakened after clashing with the authorities in those countries.in addition, the Muslim Brotherhood organization in Jordan included the Palestinian territories. Through these points, it was able to play an active and influential role at the regional level.

This had an effect of employing the activities and interests of the Muslim Brotherhood of Jordan, in order to serve their own policies, at the expense of the national interest. The trans-border partisan and organizational considerations, defined their political interests and orientations. There are many examples of this.

Perhaps the most prominent stance of the Muslim Brotherhood, is its stance from the Egyptian President, Jamal Abdel Nasser, who banned the group in Egypt from carrying out its activities, and prosecuted its members, after they were accused of attempting to assassinate Nasser in 1954.

Nearly two decades later, the Muslim Brother of Jordan, took a much similar stance to the above-mentioned stance, from the crisis between the Muslim Brotherhood and the Syrian authorities in 1975. The Muslim Brotherhood Shura Council in Jordan, led by then-Mohammed Abdul Rahman Khalifa, declared that "jihad is an obligation on everyone", as a mean of attacking the Syrian authorities. Especially since the group in Syria established a secret armed movement known as the "Fighting Vanguard" to launch attacks against targets in Syrian territory. 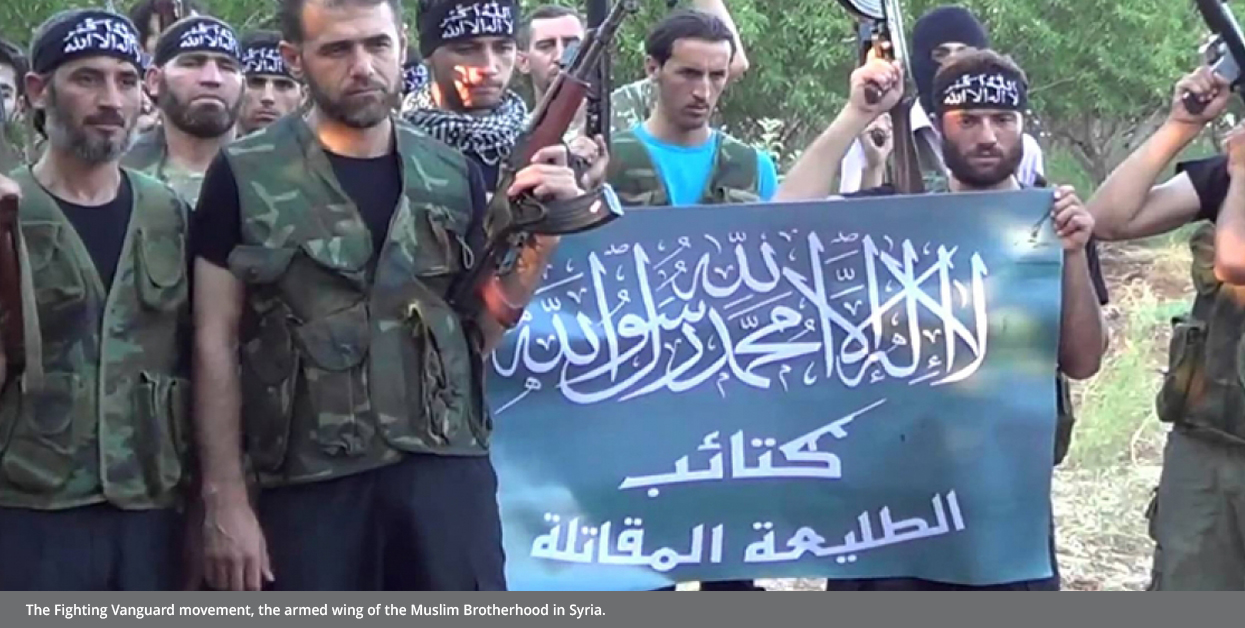 The Syrian authorities deemed the Muslim Brotherhood as a terrorist organization, at a time when the group had nearly 200 offices inside Syria, besides some offices close to the Jordanian borders. Damascus saw the support provided by the Jordan's Muslim Brotherhood to their counterparts in Syria, as a threat to the integrity of its territory. The matter which has strained the relations on the official levels between the two countries.

In the same regard, the relations between the Muslim Brotherhood in Jordan, and Hamas, was negatively reflected on Jordan's foreign relations. The country faced political crises with the United States and other countries, as a result of the Brotherhood's policies of propaganda, recruitment for the favor of Hamas, and the continued call for "jihad", which has had repercussions on Jordan's national security. That impact on the country can be mentioned in the following points:

Through the previous part, the Muslim Brotherhood group in Jordan, was a part of forming the political map in the Arab world. They had a clear impact on relations between the Arab world countries via the unilateral view of its trans-border policies.

In addition, the regional events, particularly those associated with Islamist groups, had an impact on defining the approach, vision, and strategy of the Jordan's Muslim Brotherhood. This effect can be detected by returning to the "Islamic globalization" of the Iranian Revolution, and the arrival of its leader, Ruhollah Khomeini to power 1979, This motivated the Islamist groups, particularly the Muslim Brotherhood, to repeat Khomeini's experience.

The stance of the Muslim Brotherhood of Jordan was no different from that of the global organization's stance. Expressed by its leaders, such as Yusuf al-Qaradawi, who once said that he will defend Iran if it is attacked by anyone, because it is an Islamic state, noting the size of coordination, relations, and common aspects between the two sides.

Jordan's Muslim Brotherhood stance from the relations with Iran after the Revolution can be summed up by what Hamza Mansour said:

"Iran is a Muslim country and a neighbor. We have religious, historical, and geographical ties with it. Therefore, the relationship between Iran and the Arab States must be regulated on the basis of non-interference in domestic affairs, and equal cooperation with the Arab world. No one can exclude Iran from its geographical position. There is no way but understanding on the basis of being peers, mutual respect, and the bias for the causes of the nation, and the interests of the peoples. The Muslim Brotherhood condemn "sectarian and ethnic conflict". These components of the nation have been part of it for centuries, and we need to regulate the relationship between these components, and our fight with those who occupy our land, threaten our existence, and target our faith".

Right from this point, the relations between the Muslim Brotherhood of Jordan and, the Justice and Development Party of Turkey, which is seen (by the Muslim Brotherhood in general) as an inspiring Islamic model, in its religious and political dimensions. For it is based on Islamic discourse, which portrays the Turkish president, Recep Tayyip Erdogan, as a defender of Islamic causes, notably the Palestinian cause, and standing against the West and Israel. This was manifested by the Mavi Marmara ship clash, with Israel on May 31, 2010.

Although the Turkish discourse is, in fact, nationalist-conservative, adopting pragmatic policies, but the Muslim Brotherhood, in Jordan and in general, welcomes such discourse and propaganda in the political fields and arenas. So, the Muslim Brotherhood is quick to welcome whenever the AKP achieves electoral victories, as well as at Turkish national events.

Oddly enough, all these celebrations of Erdogan comes despite the experience of the Justice and Development Party, which emerged from the Virtue Party, and officially rejected political Islam, is continuing to rise to power since 2002, on the basis of a nationalist, populist, and conservative discourse, calling for Turkey's return to the Ottoman heritage. Although the party is currently facing multiple electoral difficulties, which pushed it to cooperate with nationalists, and adopt a conservative political identity, returning the highest demand of Islamic claims to just formality, after it was radical in its approach. This made the Islamic movement lose their ability to formulate an integrated ideological project, in favor of the shuttling between the two sides of the secular system, in a way that avoids a strong conflict with secularism, which control the state wheels.

The extent to which the Muslim Brotherhood in Jordan is influenced, is not only limited to the conceptual and ideological aspects, but also extends to the roles and operational aspects. This was clear during the so-called "Arab Spring" and the arrival of their counterparts in power in Egypt in 2012. At that time, the group in Jordan changed their local tasks and roles in the political arena, to become bolder and more outspoken in expressing its goals. An example is the attempt to emulate and keep up with the group's political rise in Egypt. Like the former group's observer, Hammam Saeed, when pledged in January 2013 that Jordan would be a "state in the Islamic caliphate". Even after the fall of the experience in Egypt, the reaction of the Muslim Brotherhood of Jordan, sought to cover up the reasons for the failure, with its solidarity with the planning of popular festivals and events, including the festival "At Your Service, Aqsa", which was dedicated to solidarity with the group in Egypt, after the removal of Mohamed Morsi. In July 2013, the head of the Islamic Action Front, Hamza Mansour, described what happened in Egypt as "a coup".

In 2013, Hamza Mansour was asked, in a press interview with the former Secretary-General of the Islamic Action Front, between 2002 and 2006 "Do you have relations with the Muslim Brotherhood movement in Syria, which is deemed to be one of the most prominent political currents opposed to the Syrian regime?"

He replied "We have no organizational relations with anyone outside Jordan, but the relations with the Muslim Brotherhood in Syria is intellectual and emotional. We support all the Islamic movements and all movements seeking national liberation".

However, the failure of the Muslim Brotherhood in Egypt had an impact on the group in Jordan. The latter has lost the solid ground on which it was based, and the environment that fostered. Such failure deepened the divisions within the group, increased its disputes with its branches abroad, turning from being temporary crises to permanent, after the Muslim Brotherhood of Jordan announced the disengagement of the group in Egypt on February 11, 2016.

Based on what we said, we can conclude the level of influence the Muslim Brotherhood, has exerted in Jordan towards its counterparts in, Syria and Hamas, and how partisan and ideological facts were reflected on the group's orientation, behavior, and roles. Along with demonstrating the extent to which it has affected the country's official domestic and foreign affairs.

On the other hand, the group itself has been affected by foreign changes, since the outbreak of the "Islamic Revolution" in Iran, and the rise of the Justice and Development Party in Turkey, to the group's assumption of power in some Arab countries, as in the case of Egypt (2012-2013). These examples favored the Muslim Brotherhood's agenda in Jordan, and led to its attempts to overcome the local balances, in its quest to emulate Egypt's experience in reaching the office.