The Electoral Indecisiveness: when a President Becomes a Lame Horse

The Electoral Indecisiveness: when a President Becomes a Lame Horse

This op-ed tackles the presidential and parliamentary elections held in a number of countries in previous years, both in Europe and in countries in the Middle East, and how small or novel parties, influenced by the elections results, became obstacles facing the traditional parties while forming governments, as in the past.

Elections, held in many parliamentary systems states, over the past few years, produced a state of "indecisiveness", where the traditional parties that have long monopolized the formation of governments, dominated the functioning of parliament, and passed their laws so flexibly and easily, are suffering now with electoral results that keep them below the threshold of an absolute majority.

Those traditional parties had to bargain with other parliamentary parties and blocs, in order to form an absolute majority that may enable them to form a coalition government. In this case, the large parties with the highest votes to implement their programs which such parties were elected thereupon, are often constrained due the multiplicity of orientations and desires between the parties and blocs that make up these coalitions, as well as that the coalitions are sometimes formed by many contenders, making the continuity of governments, within this space, be subject to the emotions and satisfaction of their components.

The presidential systems, where a Prime Minister is not required to be nominated for a parliamentary majority, are also facing the dilemma of having to enter into negotiations with parliamentary blocs and parties when voting on bills, the matter which negatively affects the government's mandate, making them loses their uniqueness, and makes their laws be heterogeneous.

Before the phenomena of "electoral indecisiveness" the concept "minority's majority" became common in the political systems studies' literature. The political landscape is jammed by the rise of local forces that broke the monopoly of the dominant traditional forces.

The recent French presidential election (June 2022) confirms this phenomenon, with the centrist French President, Emmanuel Macron, winning the run-off against his right-wing rival, Marianne Le Pen, with 58.55% votes he got to Le Pen's 41.45%.

The Rising Forces and Their Role in the Rise of Indecisiveness

The rising forces are using the growing discourse on the ineligibility of political elites, as the latter are unable to address economic and societal problems, such rising forces present themselves through a discourse based on considering the circumstance according to the perspective of groups that are far from the decision-making centers, where such groups see that they are marginalized, and experiencing a gap in community justice.

At a time when popular believe of the inability of political elites is growing, the discourse of rising forces — both right-wing and left-wing — is interpreted as the result of the deliberate shortcomings of the elite over its decades in the office. Such rising forces are presenting themselves as an alternative to the "unrealistic" promises, as these forces are way out towards social justice, and the restoration of "original national" sovereignty to the "people".

The rising forces also claim that livelihood challenges and difficulties can be solved by reducing the country's external interactions, both in terms of their commitments to other countries, and in terms of halting the receiving of foreigners and immigrants. Many right-wing and populist parties are increasing their intensity towards immigration, considering them a threat to the country's identity and demographic stability in the medium/long term.

In the difficult circumstances faced by world countries, resulting from the covid-19 pandemic, then the Ukrainian crisis, the political reality in France may overspill to more than one state, even though the rising and populist parties often do not have practical programmers and realistic solutions to intractable issues and challenges, but they gain the legitimacy of "rejection", i.e. representation of those who reject the status quo.

Thus, such rising forces are benefiting from the penal voting, created by some voters seeking to replace those who were previously elected, either by voting for the rival, or by abstaining from voting. Abstaining from voting is influential when exercised by large numbers of people, who usually vote for traditional parties.

The rising right-wing parties in Europe, as the European bloc is contrary to national sovereignty, are united as a super-country union whose articles are agreed upon by domestic law. These hostile or anti-European sentiments are weakening the level of coordination, particularly on defense and foreign policy issues, unlike the traditional European traditional parties, interested in the European Association, seeking to promote the integration across the European Union.

The Phenomenon on "Indecisiveness" Reaches the Middle East

Right-wing and populist parties are growing, against the decline in the presence of traditional parties. In the 2017 French presidential election, Macron voted 66% to Le Pen's 33.9% (2022 elections, as previously reported, Macron won 58.5% against Le Pen's 41.4%)

The results of the legislative elections clearly demonstrate the progress of le Pen's National Rally Party, which succeeded in raising its representation from 8 deputies to 89 deputies. This rise of non-traditional non-elite parties is spreading in more than one European country, not just in France.

Belgium is one of the most unstable European countries in Europe throughout times. It has the longest period of governmental vacuum time for a state that is not in war. This period is recorded in the Guinness Book of World Records. None of those who were tasked to form a government, after the June 2010 elections, had succeeded in winning enough votes until December 2011. The country remained without a fully-fledged government for 541 days.

The May 2019 elections were not much different from those in June 2010, when the vacuum lasted nearly 500 days until October 2020.

Some studies attribute this electoral fragmentation to cultural heterogeneity, with three official languages, French, German and Dutch (West Germany Dutch language) prevail in the country. The concept of the "Belgian Situation" has become a response to a situation, in which the ballots are unable to produce a clear majority enabled to form a stable Government.

As for the Middle East, the recent legislative elections in Iraq (October 2021) and Lebanon (May 2022) reflect the electoral indecisiveness, where the rise of independents was a breach to the existing balance. Major currents were subjected to some kind of fragmentation. In Lebanon, the Future Movement withdrew from electoral participation, leaving the March 14 forces without their Sunni weight.

In Iraq, the so-called "Shiite House" was divided into a Coordination Framework and a Sadrist movement, pushing each to enforce its vision in a form of a government. The Framework wants a consensus that includes all forces, so as not to exclude the government, while the Sadrist movement insists on a majority government, leaving the rest of the forces to form an opposition.

The faltering of bridging the gaps between the Framework and the Current led to the resignation of Current's deputies from the Iraqi Parliament, opening the door to serious questions about the parliament's ability to complete its constitutional term without the need for early elections.

In Tunisia, the elected president, Qais Saied, also suffered from obstructing the elected parliament to the emergence of his steps. He took emergency steps that disrupted the parliament and the constitution, due to what he justified as preventing some political currents from disrupting the state, and the impact of the state's capabilities in exercising its duties towards citizens and its international obligations. 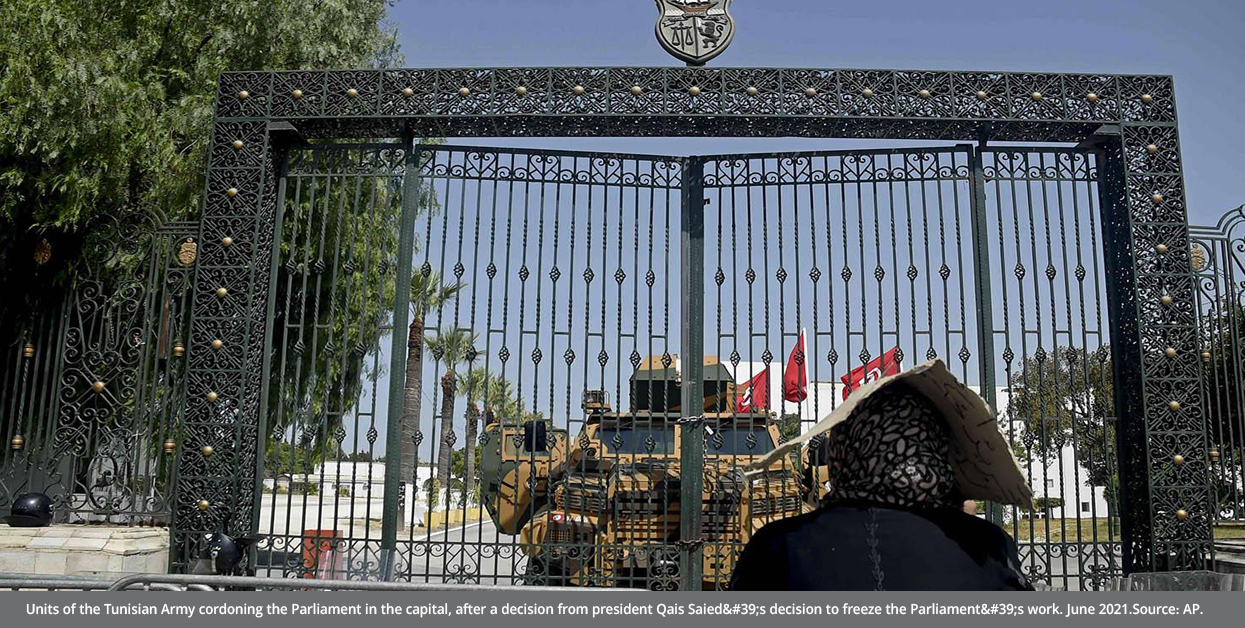 In Israel, the government coalition called on June 2022 for early elections, the fifth of a kind in three years, justifying its call to prevent the country from entering into legal and security chaos, after it was unable to extend the law governing settler conditions in the West Bank.

It is not unlikely that the ballots will not approve a clear majority in the fifth election. The right remains divided, amid the rise of new forces in the Israeli political scene, such as religious, nationalist, and Arab parties. These forces have a role to play in tipping the balance that has been almost confined since 1948 between two or three blocs.

The factors causing "electoral indecisiveness" in the Middle East may not differ from those in Europe, except for the fundamental difference, that most Middle Eastern countries where elections are held are not accustomed to the electoral process. Democracy is not entrenched in this part of the world compared to western countries, where democratic practice has stabilized as a system of government for decades.

Majority's President or a Lame Horse?

With the complexity of the political systems, and the multiplicity of their functions and units, it is normal that structural problems would arise, especially when the constitution over-applies the legislative and executive authorities "balance" principle, giving both powers "equality" of power and influence.

This equal power of the legislative and executive authorities carries the risk of worsening the political blockages, reaching an institutional blockage. Then, a disruption in institutions concerned with facilitating life affairs would take place, for example: through strikes to express rejecting the policies, or to convey service demands that cannot be absorbed through the blockaded political system.

In the event of a blockage, the president's inability - whether he is a government or state president - is increasing. The president, then, would turn from being a minority's majority president into a "lame" horse, unable to move forward to take care of public interests. this metaphor is inspired by the "lame duck" metaphor, the description to the U.S president during the period commencing as of the emergence of the presidential election results (early November) to the inauguration of the new president (January 20).

Totalitarian and non-pluralistic democracies, such as China and Russia, often survive the trap of the lame horse, the matter which increases the pressure on Western states as a result of this situation. The democratic process has become a loophole, from which to infiltrate to influence the durability of the internal situation can be made. This is not meant to praise the totalitarian style of governments, rather, it is to criticize the indecisive democratic situation that many states have experience.

As for providing solutions to this dilemma, this is up to the domestic situation in each country. Mostly, solutions may revolve around constitutional amendments and electoral systems. In the past, the electoral competition between two or three large parties has receded with the marginal presence of parties and small forces. However, with the rise of the latter that disrupted the existing balance. Though it is true that small parties are far from achieving a majority, but its removal of more votes of voters prevented any of the large parties from achieving a majority, that enabled them to govern, in exchange for the formation of the minority of the opposition, The political scene is no longer confined to a party that governs and a party that opposes and monitors.

More important than the revision of the electoral systems is to think deeply about political consensus, and to view it not as a "temporary" stage of building a parliamentary majority, but as a result of a consensus in the Social Totality upon visions, ideas, and solutions.

Social media has contributed to the dispersal of all the community, and has given those outside the elite a media an outlet for recruiting and spreading propaganda.

The practical capabilities of rising forces are lower than traditional parties, by virtue of accumulated experience. Should such rising forces succeed in winning a majority and tested in the field of work, then their arguments and discourse will lose their moral luster, as the emerging crises make it difficult, even for the parties accustomed to govern, to succeed in managing such crises convincingly popularly.