The Economic Trends of Trump's Administration

The Economic Trends of Trump's Administration

This article highlights the economic contradictions that accompanied and stemmed from Trump's rise to power in the U.S., and addresses major economic visions adopted by the current presidential team. 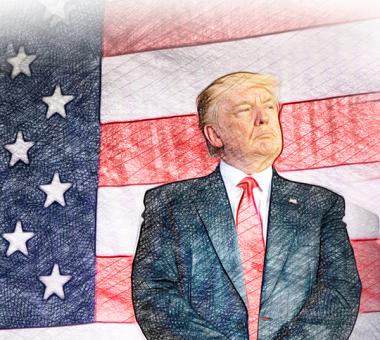 It is rather too simplistic to examine the U.S. administration's political trends by only focusing on President Trump’s character and his official statements in press conferences or on social media nor is it is enough to discuss his cultural and social background, his behavior prior to and during his presidential term, or other personal dimensions. Despite their significance, these aspects are not the sole determinant of the administration's trends. It is rather imperative to analyze conflicting and/or intertwining interests of social currents representing the real interests of U.S. citizens at the domestic and international levels. Such representation is not necessarily in line with the interests of all classes and social groups in the U.S. society nor any society under examination.

Trump's winning U.S. presidency in November 2016 coincided with several events that contributed to the establishment and promotion of a social and media image that was opposing to his presidential programs and supporters, not only in the U.S. but also globally. These events include the rise of right-wing currents in Europe and the British people's vote in favor of withdrawing from the European Union.

This right-wing tide is gradually penetrating Western societies and among the political leaders and is perceived by some analysts as a defect in the political participation process. It is also believed to stem from lack of confidence in liberal currents and parties among a wide segment of societies, not to mention that voters no longer rely on these currents in achieving their material and moral aspirations. It is, however, worth noting that theoretical assessments of the validity of right-wing concepts are mainly subject to media statements and sentiments; the measurement of how far they diverge from democratic values are also conducted ​​in isolation of their socio-economic basis, which eventually leads to approaches that are relatively distinct from the tangible objective reality of communities.

How Did Trump's Model Emerge?

Just like other societies of Western European countries following World War II, the American society has witnessed a time of social welfare that is primarily reliant on the state in securing "effective demand" for various goods and services. Backed by growing technological development, this has led to accelerated productive capacities of economic sectors driven by rivalry with the socialist camp in all fields, eventually resulting in several concessions in favor of working classes and underprivileged segments in general.

Following the collapse of the socialist system in the last decade of the 20th century and U.S. declaration of its victory in the Cold War, the "developed" western world started spreading its liberal values ​​on a broader geographical and socio-economic scale. This was attributed to the emergence of new markets pursuing capitalist economy route, creating problems among global components for interests that bring them together on one hand, and their relationship with developing economies on the other hand.

U.S. technological development has determined the quality of employment, where several conditions have been set for working citizens who must partake in the production process. These conditions enlist the educational qualifications and experiences required. Since not all individuals can attain these requirements, they were somehow only accessible to the upper-middle classe, a factor that led to structural distortion in the U.S. workforce.

This distortion was accompanied by structural defect in the distribution of productive sectors in terms of stimulating one at the expense of the other. This affected the economic structure in general, leading to a fall in the industrial sector's contribution to GDP during the past 50 years from 27% to 12%, while industrial jobs declined during 2000-2010 from 17 million jobs to less than 12 million. By 2000, investments in fixed capital (buildings and technics) have also decreased by 1.8% in 15 out of 19 industrial fields.

There are around 250,000 U.S. small and medium enterprises (SMEs), accounting for around 86% of the manufacturing companies; these enterprises were lacking the environment needed to keep abreast of technological developments; thereby, their economic role was reduced vis-à-vis specialized sectors in information technology, precise industries, trading in financial markets, and foreign trade. The significance of consumption has thus increased, marking a 69% share of  GDP in 2018, a negative indicator for a capitalist center like the U.S.

Over the past 30 years, the U.S. administrations neglected enhancing the position of manufacturing and heavy industries, instead, they relied on imports, creating more competition in the local market and pushing some large companies to export their capital abroad in search of better investment conditions in terms of production costs.

Since the onset of the 21st century, there have been rising congressional voices against the current economic situation that does not take into account those working in manufacturing. Trump's victory could be seen as an extent to this political protest with a complex and long-established economic basis.

The Industrial Base: Reclaiming Glory through Trade War

Peter Navarro, who holds a Ph.D. in economics from Harvard University and was appointed a White House adviser in 2017, is the driver behind U.S. economic policies in Trump's administration; starting from withdrawing from the Trans-Pacific Trade Partnership, followed by drafting a new agreement that is "more biased" towards U.S. interests vis-à-vis the NAFTA with Mexico and Canada, and recently the trade war with China that started in March 2018.

Navarro authored and co-authored several books that address China's military and economic "threat" to the U.S. society. These publications include "The Coming China Wars" and "Death by China". He also advised Trump to develop his electoral program in cooperation with Wilbur Ross, a global investor who was later appointed as U.S. Secretary of Commerce. Ross was known for purchasing bankrupt industrial facilities such as steel mills and other manufacturing industries.

Trump and his presidential team's proponents believe in their ability to reposition the U.S. in global economy by increasing competitiveness of exports through "revolutionizing" productive forces; imposing tariffs on exports to the U.S.; promoting domestic products; pushing U.S. companies to domestically manufacture their products; and in parallel, promoting U.S. workforce by imposing severe restrictions on immigration and work visas.

Trump's administration managed to reduce unemployment rates to 3.7% by September 2018, a percentage that is close to the lowest unemployment rate in U.S. history, which was about 3.5% in 1969. Moreover, the average wage per hour increased by 5%, while taxes were generally decreased from 35% to 21% until the end of 2018.

However, given the co-dependency among giants of global economy, the U.S. current economic policies –according to observers– have and will lead to drastic fluctuations in the global economy. The U.S.-China trade caused a decline in China's industrial production by 4.8% in July 2019, marking the largest rate since 2002. The International Monetary Fund also lowered its predictions for global economic growth to 3.2% in 2019 and 3.5% in 2020.

There is a conflict of interests between class, particularly owners of “preventive policies” and those adopting the “free market” approach, evidenced by the rising dispute between the White House and the Federal Reserve; Trump calls for depreciation of the dollar for fostering the U.S. exports and its position in the trade balance, where the deficit amounted to $621 billion in 2018. A powerful dollar, therefore, threatens the economic agenda of the U.S. president and lowers his chances of winning a second term, according to Bloomberg.

Donald Trump considers the Federal Reserve as the main obstacle for a “booming” U.S. economy, as it also competes with U.S. manufacturers more than foreign companies.

The lack of harmony between Trump and the Federal Reserve along with the fact that many central banks in various countries have lowered their interest rates would distort investors' confidence in U.S. bonds, whose value declined due to the dollar's instability. The Federal Reserve has cut interest rates three times during 2019 by a total of three quarters of percentage point; this reduction was met with U.S. president’s dissatisfaction because it is “very simple” since U.S. bonds are a “safe haven” for investment at times of pressure in the trading market and constitute a major and indispensable source of funding for the U.S. government.

Since announcing the cutting of interest rates, several countries have been selling their shares of U.S. bonds out of fear for their economies. For countries like Russia and China, the selling process could be a means of putting pressure on the U.S. government. For instance, the Chinese authorities are no longer the largest holder of U.S. bonds after decreasing to their lowest, standing at $1.1 trillion in 2016, while Japan ranked first in holding U.S. bonds, standing at $1.22 trillion by June 2019.

Nonetheless, several opinions in the White House exclude that an economic recession as a result of volatility in global bond markets, calling on investors to disregard the pessimistic media voices which negatively impact indicators of exchange markets with no economic ground.

Trump's victory as the 45th president of the U.S. came as an expression of the damage to a wide spectrum of the U.S. society due to economic globalization and the loss of plenty of economic gains and benefits they previously owned. These economic claims at the domestic level, and hence globally, were enveloped by a far right-wing rhetoric on various social issues (the rights of minorities, pluralism, women, and religion). Trump's "neoliberalists" opponents, who are seeking to keep the status quo in the U.S. economy with some minor amendments and frills, are offering a democratic and "humanitarian" discourse on the same issues.

The economic trends of Trump's administration are only a manifestation of the beginning of drawing a new era of economic relations globally, an era that takes the world back to a time of national economies through what can be called the “reverse globalization”. The U.S. commences this era by retreating from its international economic role with no consideration to the dire consequences of such retreat on the monetary and financial stability globally.