The Directions of Jordan’s Energy Sector

The Directions of Jordan’s Energy Sector

The Executive Action Plan for the Comprehensive Strategy of Energy Sector in Jordan for the period 2020-2030 outlines the country’s direction in the energy sector, as well as its involvement in regional energy projects by using geographical considerations and logistics to play a major role in the region. The purpose of this report is to highlight Jordan's energy strategy, as well as the special nature of Jordan's role in regional energy projects.

The energy issue in the region has always been a point of discord or clash of interests for regional and international stakeholders interested in contributing to the management of this issue, in terms of determining the mechanisms and quantities of extraction and generation of energy, as well as transmission and distribution networks. Such contribution is expected to yield economic benefits and impact the geopolitical scene in the region as a whole.

Jordan seems to be interested in playing an active role in the energy sector. This is demonstrated by the fact that Jordan will take part in projects that involve delivering electricity to Lebanon through Syria after importing Egyptian gas, transferring that gas to Lebanon via the Arab Gas Pipeline, as well as supplying electricity to Iraq within the framework of trilateral partnership projects with Cairo and Baghdad. In parallel, Jordan’s Ministry of Energy and Mineral Resources developed the "Executive Action Plan for the Comprehensive Strategy of Energy Sector in Jordan for the period 2020-2030", which identifies a set of Jordanian characteristics and roles in the regional energy scene.

Therefore, the purpose of this report is to answer some questions, including: What are the key points of this strategy? Does Jordan have a special role or a place in the regional energy industry? What can Jordan do to accommodate its local needs with its desire to engage in this scene?

To answer these questions, we must first examine the most prominent features of the Jordanian energy map so that we can comprehend what Jordan's aspirations are in this field, and how these aspirations can be reached.

In fact, Jordan's energy resources are very limited compared to most of its neighbors in the region. The kingdom imported nearly 94% of its energy needs in 2017, which amounted to 8.5% of its GDP at the time. As a result, we can deduce from the beginning that Jordan seeks first to fulfill local needs as much as possible due to its inability to export energy. It has therefore been necessary to develop the aforementioned energy sector strategy, which involves strengthening self-reliance within the energy sector so as to assure sustainability and security of supply.

The plan aims to generate 48.5% of electricity using local sources by 2030, instead of 15% today. This will be achieved by increasing the reliance on renewable energy sources from 21% (2400 MW) to 31% (3200 MW) by 2030. At the same time, dependence on natural gas will be reduced from 61% to 53% and on oil products from 3% to 1%, while it will remain at 15% on oil shale. In order to achieve this goal, oil and gas exploration will be intensified, and foreign investments in renewable energy will be attracted.

According to the Energy & Minerals Regulatory Commission’ (EMRC) statistical bulletin for 2020, there are nine power plants in Jordan that generate electricity using gas, with a total capacity of over 4600 MW, while the local demand for electricity is 3600 MW (maximum load). In other words, there is a surplus of over a thousand megawatts to the country's needs. Furthermore, the Attarat power plant project, the largest foreign investment in the country's history with a value of $2.1 billion, started in late May in its first operational phase with a capacity to generate of 235 MW, and the project will be able to generate 470 MW after its full operation.

Given the figures of the generating capacity and the local consumption of electricity, Jordan is positioned to participate in the regional energy scene by exporting electricity to neighboring countries in the first place and at present in particular. This, of course, requires maintaining diplomatic relations with the concerned parties at a high level of communication and coordination, which makes electricity export projects part of the total economic relations, including all other energy sectors, that affect to a certain extent diplomatic behavior.

As we see today, this is exactly what's happening between Jordan and Syria, where coordination is taking place in both the energy and trade sectors, because Lebanon cannot import electricity except through Syria. In addition, the US ambassador to Beirut, Dorothy Shea, stated last August that the US doesn't mind importing electricity and gas from Jordan and Egypt through Syria, since the US will be involved in discussions with the World Bank regarding financing the project.

As for Iraq, Jordan is expected to export 150 MW of power annually in early 2022; and in the West Bank, the concerned authorities on both sides have coordinated to increase the amount of electricity exported to 80 MW from 26 MW. 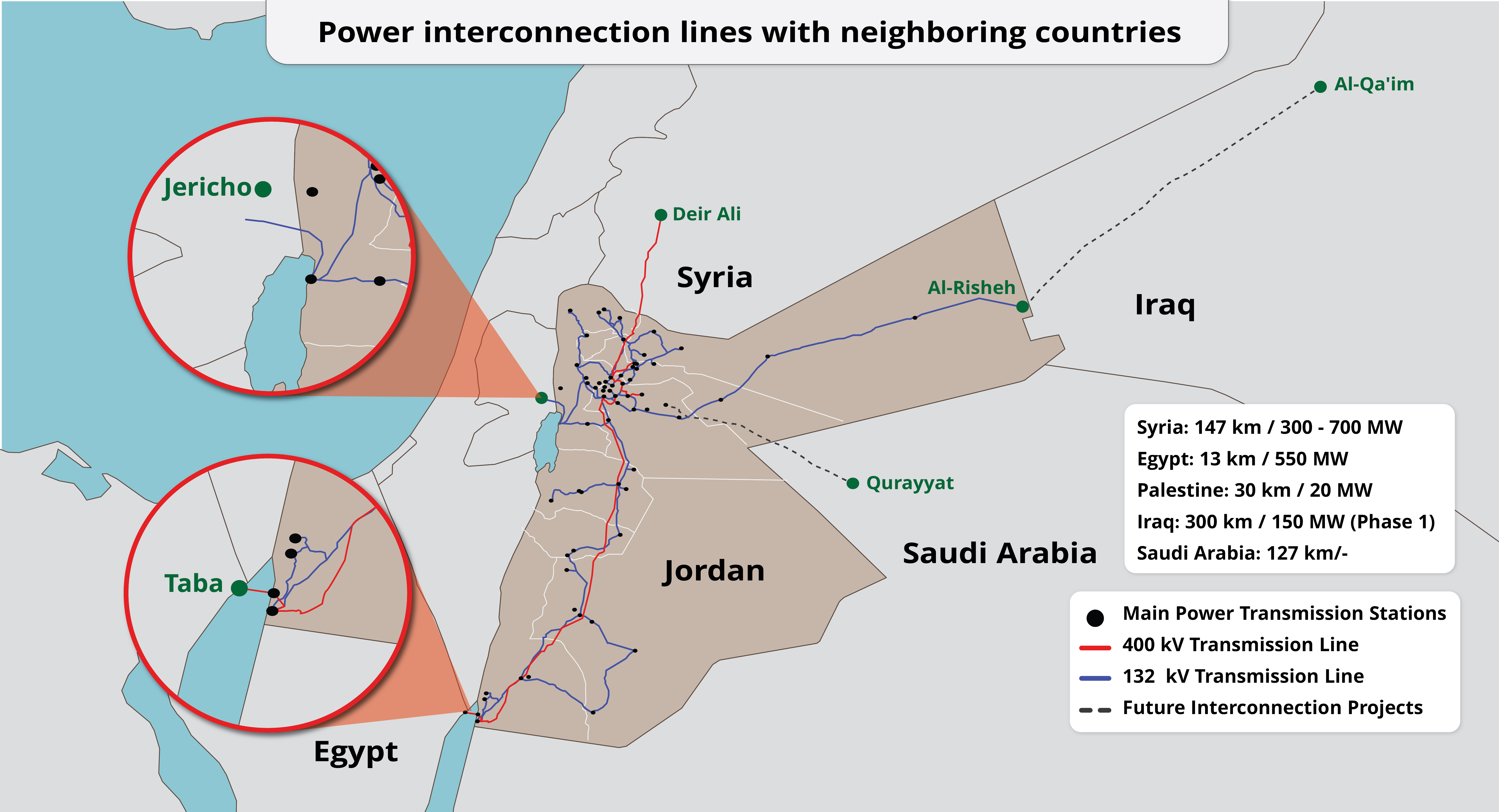 As an indication of the importance of regional energy integration for Jordan, the Government’s Economic Priorities Program for 2021-2023, released on August 29, noted that regional electrical interconnection projects needed to be completed. One of these projects involves increasing the capacity of the electrical interconnection line between Jordan and Egypt from 550 MW to 1,100 MW by 2023. In addition, the National Electric Power company's annual report for 2020 indicates that Jordan and Saudi Arabia signed a memorandum of understanding in that year to export and import electricity through a 127 km long interconnection line linking eastern Amman and Qurayyat in Saudi Arabia. 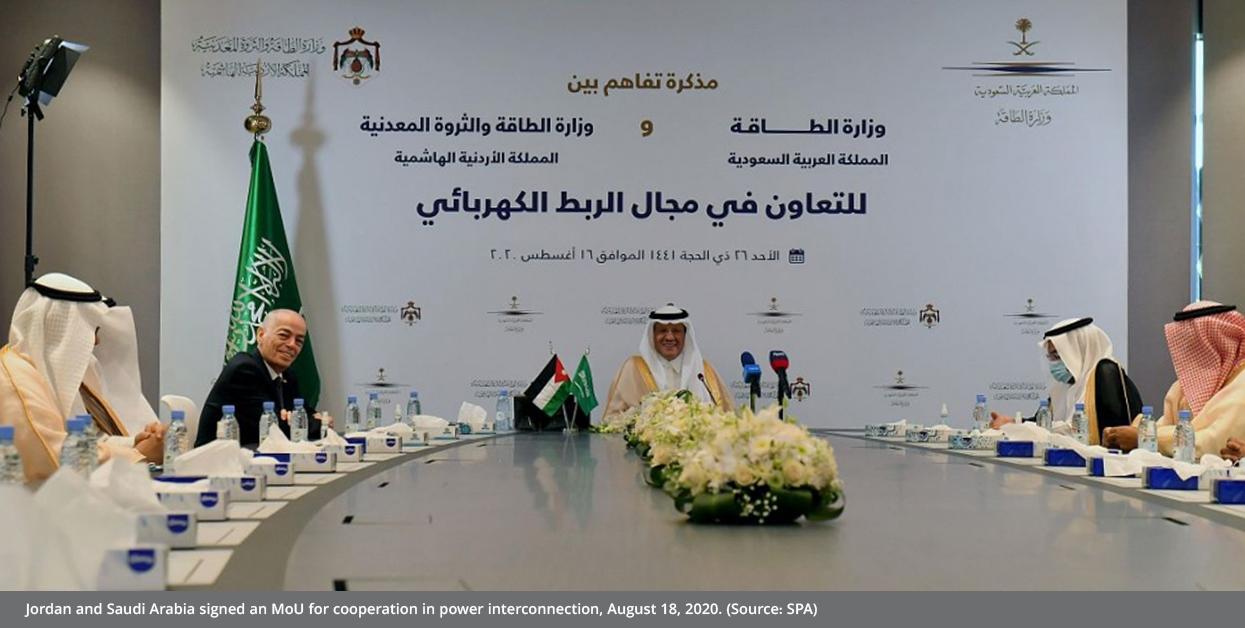 For example, the oil refinery in Zarqa Governorate started receiving Iraqi oil shipments on September 9 as part of a new agreement to supply a total of 3.7 million barrels of oil to Jordan. These oil supplies will be at a rate of 10,000 barrels per day, at a preferential price with 16 dollars discount on Brent price, knowing that this quantity will account for 10% of Jordan's daily needs for oil.

Upon the completion of the project to extend the oil pipeline from Basra to the port of Aqaba, the Kingdom's oil needs will be secured at preferential prices throughout the year. Jordan will receive 150,000 B/D from the project, not to mention the transit fees and job opportunities it will provide. A project of this magnitude has been under discussion for over three decades, but the security and political conditions in the region as a whole, and in Iraq in particular, have prevented its execution. However, the project has now been included in the trilateral partnership projects that include Cairo. This is because the oil will be supplied at preferential prices to Egypt too. Therefore, the regional importance of the project has increased, and at the same time, it is unclear to what extent the changes in the Iraqi political arena will influence the progress of the project.

To protect Jordan's energy supply in emergency situations, as well as to take advantage of the drop in global oil prices to minimize the country's financial burden, Jordan has paid great attention to boosting its strategic stock of petroleum products. This led to the establishment in 2015 of the state-owned Jordan Oil Terminals Company (JOTC). In 2020, the company stored approximately 968,000 cubic meters of petroleum derivatives and liquid gas, and it provides storage, processing, and transportation services to local and regional customers as a supplement to Jordan Petroleum Refinery Company's inventories.

Among the projects included in the Executive Action Plan for the Comprehensive Strategy of Energy Sector in Jordan for the period 2020-2030, is a project to reach agreements with Syria, Lebanon, Iraq, and the Palestinian Authority on supplying them with oil derivatives through Jordan. This clearly implies a desire to open up part of the storage facilities to external use, as well as a desire to encourage investment in more such facilities.

Recently, the Hamza oil field, located near the Saudi border east of Zarqa Governorate, has seen its productivity rise to 2,000 B/D, providing 1.5% of the local daily needs, or 140,000 B/D. Additionally, gas production capacity at the Risha gas field in Mafraq governorate has increased to 27 cubic feet in 2020, which is 7.7% of daily needs for the local market, or 350 cubic feet per day.

These events confirm the determination of the government to make full use of all available capabilities. At the same time, they send an important message to investors about the strategic interest shown in the energy sector.

Based on the above, Jordan's aim is to serve as a regional transit and exchange center for energy with its neighbors to maximize its benefits from its geostrategic position in the region. Therefore, it follows a similar pattern as Turkish ambitions in this regard, especially since Turkey is one of the major natural gas pipeline routes from Central Asia and Russia towards Europe.

The next year can be described as Jordan's year of energy: There will be electrical interconnection between all the countries around Jordan, including Syria, Lebanon, Iraq, the Palestinian territories, Egypt, Libya, and Turkey, a project that has been prepared for since 1998 and aims to sustain energy supply and reduce reliance on fuel for the production of power. Jordan will therefore be the hub for the project by linking the Gulf countries with Egypt and North Africa, as well as possibly connecting them with Europe. Additionally, a regional station for the storage and distribution of petroleum derivatives to neighboring countries will be established by building storage and other related facilities and necessary infrastructure, while increasing the reliance on renewable energy locally.

Overall, Jordan's energy sector aims to achieve regional cooperation in the energy sector in parallel with the development and enhancement of local capabilities on the technical level. This is intended to have Jordan assume a central role in the region, and is based on transforming the kingdom into a hub for energy transit between West Asian countries in the first place. Jordan will also increase its investment mix from countries of the region and the world into the country's energy sector in order to foster closer economic ties in a context that enhances Jordan's position as an economic hub that is free from political influence.