After spending eight years as Prime Minister, Abe’s resignation brings to mind a long era of political instability and weak governments, at a time when Japan needs strong governments to manage its capabilities and face the massive internal and external challenges. Accordingly, this article examines the impact of dynamics of temporary governance and weak governments on Japan foreign policy, especially with regard to the multiple alliances and partnerships after Abe. 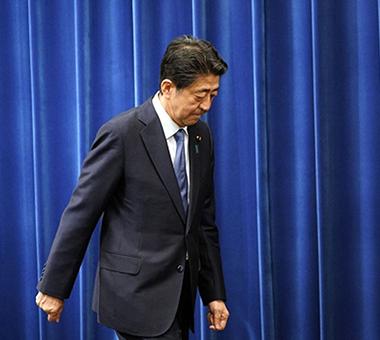 In the post-World War II era, Japan has proven to be a democracy. It has the third largest economy in the world with a GDP of $5 trillion; it is a founding member of the G7; it is considered the essential pillar of the US strategy in Asia; furthermore, it is a center of strategic weight in the Pacific and Asia and emerged during the era of the former Prime Minister, Shinzo Abe, as a prominent power in East Asia.

This political and economic importance makes it necessary for Japan to have more political stability, at a time when fears are renewed about the return of weak governments coinciding with the resignation of Abe on August 28, 2020. For decades, political instability was a prominent feature, not circumstantially or occasionally, but as a recurring dilemma pervasive in the practices of Japanese power; as this is Abe's second resignation since 2008, in addition to the resignation of the two previous Prime Ministers: Yasuo Fukuda in 2008, and Yukio Hatoyama in 2010, and others.

Although a wide range of works that try to reveal the extent of the impact of political instability on economic performance and foreign investment has been introduced hardly any of them touched on the effects of political instability on foreign policy, especially with regard to the role that states play regionally and globally. Since political stability and foreign policy are related to each other at different levels, this relationship cannot be considered one-way. An example of this is the ability of former Prime Minister, Abe, to establish a relationship with US President, Donald Trump, that most world leaders have not had. This relationship between Abe and Trump cannot be understood without taking into account the fact that Abe was able to stay in office for a longer period, unlike previous weak governments whose stay in power was limited to a few years and sometimes only one year, the matter which poses a challenge for world leaders in general, and the United States in particular, who must deal each time with a new government and a new approach.

In a related context, the dynamics of influence between Japan political stability and foreign policy are clearly visible in Abe’s second presidency 2012-2020, as he has proven that the longer the stay in power is, the greater is his ability to take a clearer foreign approach, build alliances and forge partnerships; for he succeeded in translating his ideas originated from the Japanese right-wing nationalism which call for a prominent role for Japan in the global arena, especially the political and economical.

On a large scale, Abe drove Japan to play an important role in many international and regional affairs. He contributed to the formation of the 2018 Indo-Pacific trade agreement, known as the Comprehensive and Progressive Agreement for Trans-Pacific Partnership. His approach to Australia and India also helped recreate the quadripartite security alliance together with the US in 2017, and his outreach to Europe and Southeast Asia helped in making Japan an important partner in these blocs— the Japan-EU Economic Partnership Agreement signed in July 2018 and the Japan-UK Comprehensive Economic Partnership Agreement in September 2020 were among the most prominent of these partnerships.

Furthermore; Abe’s attempt to balance Japan’s geopolitical weight and its global role was evident in a number of decisions related to security and defense, especially his attempts to reform Article 9 of the Japanese Constitution, which he once described as "rebuilding the nation." This article was incorporated by an American request and entered into force in May 1947; it states: “Aspiring sincerely to an international peace based on justice and order, the Japanese people forever renounce war as a sovereign right of the nation and the threat or use of force as means of settling international disputes.” In 2013, Japan released its first National Security Strategy which focuses on re-creating a strong Japanese army to counter Chinese growth. Although the Japanese defense budget does not exceed 1% of the GDP, Japan managed to occupy the fifth place in the list of military powers in 2020, according to GlobalFirepower website for statistics and global rankings.

On the other hand, the effects of instability on foreign policy can be comprehended when comparing the external directions of Abe’s first presidency 2006-2007 with those of his second presidency. When he was appointed as Prime Minister for the first time, Japan and India have been in a global strategic partnership since 2001, along with the bilateral summits that were being held annually since 2005. However, this relationship was not well-established until Abe settled in power after 2012. This relationship developed into a strategic global partnership in September 2014, and the nuclear agreement with India was signed in November 2016. Indeed, stability in power enabled Abe to assess the strategic needs of Japan, as he saw that both India and the United States are partners in Japanese security and defense strategies. Likewise, Abe’s first resignation thwarted the plan to establish the quadripartite security dialogue (between the United States, Japan, India, and Australia) in 2007, as his government did not last for more than a year. One of the reasons that led to the failure to form the plan was that Abe's resignation opened the door to his rival Yasuo Fukuda, who is close to China, before Abe’s effort to revive this quartet alliance in 2017.

Those examples show the effect of political instability on strategic decisions and alliances of Japan besides the uncertainty it bears to the allies. Therefore, once Abe's resignation ended his second term as Prime Minister – the longest term for a prime minister in Japan – many considered probable that the political transition in Japan would take away political fluidity at home and abroad, with growing concerns about the return of weak governments, the matter which impedes making decisions suitable for dealing with the complex security and political environment in the region. Even with the election of Yoshihide Suga, the second in command in Abe’s government, on September 16, 2020, some American experts on Japanese politics and security issues are still concerned about whether Suga will be able to continue in a stable government, according to Japan Times.

Compounding these concerns is the coincidence of Suga’s appointment as Prime Minister with the presence of many internal and external difficulties, considering that he runs an interim government as it is a continuation of the constitutional period of Abe’s rule which ends in the fall of 2021. Until then, circumstances do not seem to help him in calling for early elections, especially after the consequences of Covid-19 pandemic, which led to a decrease in Japan's GDP by about 8%. In addition to that, as the former Secretary-General of the government and advisor to Abe for 8 years, he will remain bound by Abe's legacy, which he expressed by saying: "we’re facing a national crisis due to the spread of the coronavirus and we can’t condone a political vacuum being created. We need to succeed in what Prime Minister Abe has been implementing,” adding, “This is my mission.” It is striking here that Abe himself has been subjected to great internal criticism as a result of his government's handling of the novel Coronavirus pandemic. According to an opinion poll, 49% believe that his government has not demonstrated the leadership skills needed in its response to the pandemic.

At the same time, Suga will guide Japan's foreign policy in a "transitional phase", in light of a complex regional security environment with the increasing nuclear threat from North Korea and the Sino-American conflict, apart from the growing Chinese influence in the South China Sea and the dispute with it over the Senkaku Islands which are under the control of Japan. Though Abe has demonstrated the ability to balance these external challenges, Suga, who is an expert in the Japanese bureaucracy, has barely any experience in foreign relations or diplomacy, and is therefore not a familiar face in the realm of foreign policy, thus it seems that, with the complications of travel due to the Coronavirus pandemic, he will suffice to communicate via video and phone calls with other world leaders for several months to come.

Based on the foregoing, Suga has limited options for the future of governance in Japan, besides that the decline in Abe’s popularity will have tangible consequences not only for him, but also for the Liberal Democratic Party in general. These results may appear in the upcoming parliamentary elections in 2021. At that time, any expectation of a change in the dominating ruling party will undoubtedly be followed by far-reaching changes in Japan's foreign policy. Many of the other opposition parties do not agree with this policy undertaken by the ruling party from the perspective of the global and regional role of Japan, not to mention that the biggest concerns lie in the return of weak governments and continuous changes in power, which may bring back the state of uncertainty.