Football Economy: How the Pandemic Caused Profits to Plunge at the World's Biggest Clubs

Football Economy: How the Pandemic Caused Profits to Plunge at the World's Biggest Clubs

This article examines the most significant financial revenue sources for European football clubs in past seasons, reviewing estimates and figures of how these revenues were affected by the "Coronavirus" pandemic and addressing implications of this financial crisis on future competitiveness and popularity of football. 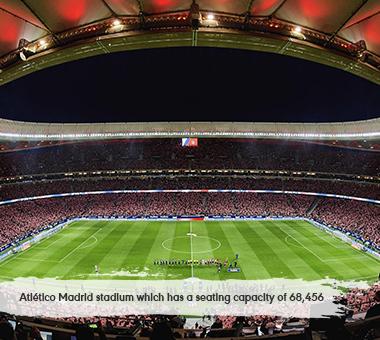 It seems mere entertainment - 22 players in two teams compete to shoot a ball with a circumference of 68-70 cm in the direction of a “goal” but it goes beyond scoring three game points to involve economic dimensions engaging boards of directors who set strategic plans for controlling expenditure, increasing revenue and attracting administrative and professional competencies in order to improve sporting and financial performance indicators.

Therefore, one cannot turn a blind eye to the football economy which now ranks 17th among the global economies, according to World Football Summit Forum Director, Marian Otamendi. Otamendi also confirmed in a press interview with the Spanish newspaper AS in June 2018 that football contributed 1.4% of Spain's GDP.

According to the annual financial report issued by Deloitte Financial Advisory in June 2020, the revenues of European football clubs for the 2018/2019 season amounted to nearly 29 billion euros, and the share of the five major leagues (English, Spanish, French, German and Italian) was 17 billion euros.

The profits of the football industry come from several major sources, most notably television broadcasting rights. In the 2018/2019 season, the Spanish League distributed- in varying proportions- 1.4 billion euros of broadcast rights revenues to first division clubs, and the share of Barcelona, Real Madrid and Atletico Madrid amounted to 166.5, 155.3 and 119.2 million euros, respectively.

A significant proportion of European League clubs’ revenues comes from match day revenue which includes tickets and food & beverage sales at the stadium. According to the financial figures for the 2018/2019 season of the English, Spanish and German Leagues, these revenues amounted to 776, 521 and 520 million euros, respectively. 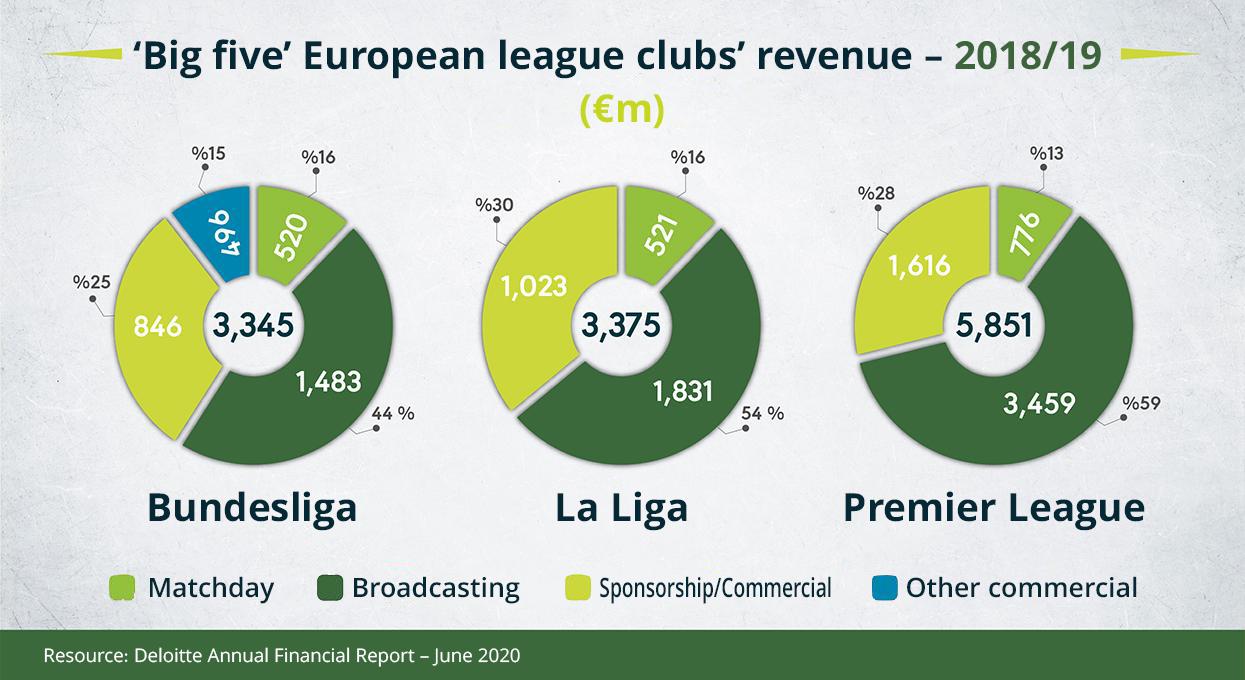 It is clear from the above financial summary that the imperatives of social distancing imposed by the Coronavirus pandemic will impact club profits and the entire football industry for at least this season. Unless an effective vaccine is developed and societal immunity that allows tens of thousands of people to gather is built, structural changes will affect the shape of economic practices associated with football.

By way of illustration, the football industry provides the labor market with tens of thousands of jobs in the major leagues, as the English League clubs support nearly 100,000 jobs, and the Italian League provides more than 46,000 jobs, either directly or indirectly. If football economy does not go back to normal in the next season, the temporary unemployment for a significant proportion of workers in this sector will turn permanent.

This return is coupled with an improvement in the global economy and the dynamism of the relations between football and other sectors. Some companies may renegotiate sponsorship contracts under the "force majeure" involved in most contracts. The advertising value of the clubs has declined due to the decrease in the number of matches and holding them behind closed doors which resulted in a fall in the actual value of sponsoring these clubs.

Indeed, the first public disputes did occur, not over sponsorship contracts, but over broadcasting rights: Suddenly, Bein Sports Network announced on June 22, 2020 that it resolved not to broadcast the Italian League matches, referring this decision to legal reasons. Specialized football sites indicated that the dispute resulted after the network requested Italian League to pay compensation for not holding matches due to the restrictions imposed for confronting the Coronavirus pandemic. The dispute was not prolonged; after 4 days the network announced the return of the Italian League broadcast on its channels. However, what is important is not the settlement of the dispute as much as the establishment of such a confrontational relationship in the time of the pandemic between football and other sectors and related industries.

Furthermore, consumer spending on many football products such as jerseys will also decrease, and a large number of people will be reluctant to renew their subscription to watch the matches. Those who have lost their jobs or have had their income damaged are not expected to devote part of their spending to football entertainment, for regardless of the enthusiasm this spherical ball raises, it remains an enjoyable luxury rather than a necessity and is not a priority for spending, as in the payment of house rent, bank loans, food, etc. It is worth noting that many clubs have adapted to the new market requirements imposed by the pandemic, by presenting preventive supplies in their electronic stores, such as masks with the club's logo printed on them, in addition to allocating a percentage of the proceeds from the profits of these supplies to address the repercussions of the pandemic, whether through medical or social aid.

Naturally, the economic situation of the clubs will be reflected in the valuation of football stars. A special report, released in May 2020 by KPMG International for Advisory services, estimated that the prices of players in the top ten leagues in Europe fell by a total of 6.6 billion euros compared to February 2020 prices. Some clubs have also reduced the players’ monthly salaries by mutual consent in the midst of the country-wide lockdown.

In this regard, the author of The Age of Football, British academic David Goldblatt, revealed that spending huge sums of money on contracts for players may become history, calling, in statements to the international news agency, Agence France-Presse, in April 2020, for the pandemic to be turned into an opportunity by revolutionizing the logic of the football industry.

The financial data reviewed in the reports mentioned in this article show an increase in the salaries percentage - for players, officers and technicians - of total revenues. For example, English League clubs in the 2018/2019 season achieved returns of 4.9 billion euros, of which 3 billion euros were allocated to spending on wages, equivalent to 61% of total revenues.

From an optimistic perspective; this compulsory unprogrammed reduction of the players' market value may have saved the transformation of this value into an economic bubble that could explode at any moment. This decline may bring on fair competition between clubs, as a club with medium financial capacity is often unable to recruit star players due to the "superiority" of the wealthy clubs' ability to include those players. Therefore, football may become more competitive if the luster of its economy decreases and clubs focus on creating young talent.

In recent years, critics called for the return of football to its classic, popular character, behind the luxury of economics. Among the most prominent of these critics is the sports literature writer, Eduardo Galeano, who describes himself as "a supplicant?? / apologist? / campaigner? for good soccer". In a report published by The Atlantic in June 2018 about the football poet Galeano, the magazine reports the stages of the writer's interaction with football and how he was frustrated by hyper-professionalism in football because it "eliminates fun, kills imagination, and contains valor", as he puts it.