Policies analysis| This analysis addresses the significance of El-Alamein consultative meeting, which brought together the leaders of the Arab countries of Egypt, Jordan, the United Arab Emirates, and Bahrain, in the light of the joint economic projects, and the converging political positions of such countries, in a way that is likely to open the door to expanded Arab-Arab cooperation, with the aim of jointly confront the regional and international crises.

On August 23, 2022, the Egyptian Mediterranean city of El-Alamein hosted a meeting, described as consultative, between the leaders of the Arab countries of Egypt, Jordan, the United Arab Emirates, and Bahrain. The Iraqi Prime Minister, Mustafa al-Kadhimi, was supposed to attend the meeting, though he already come to El-Alamein, but he had to leave early due to developments in Iraq's domestic political crisis.

Since announcing it, the Consultative Meeting raised many questions, related to its timing, objectives, and the nature of the countries attending, especially since what was issued, before and after the Meeting, was not far from the talk about strengthening the Arab solidarity, and working to lay the foundations for peace and stability in the region.

Why These States in Particular?

There are objective considerations behind the meeting of these states, specifically in the city of El-Alamein. Most important of which can be noted in the following:

In May 2022, the Integrative Industrial Partnership for Sustainable Economic Development was launched between the UAE, Egypt, and Jordan, a partnership to which the Kingdom of Bahrain later joined. This partnership involves investment in five industrial sectors, shared by these countries, in order to promote economic development, industrial integration, and the integration of value chains among them.

The strategic objectives of this partnership are: to pursue sustainability-based growth, achieve guaranteed and resilient supply chains, develop world-class competitive industries, promote value-added manufacturing sectors, promote the growth and integration of value chains, and trade between the four countries.

This partnership is heavily relied upon in order to achieve domestic development goals in the coming years, especially with the great assets that the partnership countries possess, whether at the human, economic, or strategic-geographical levels. 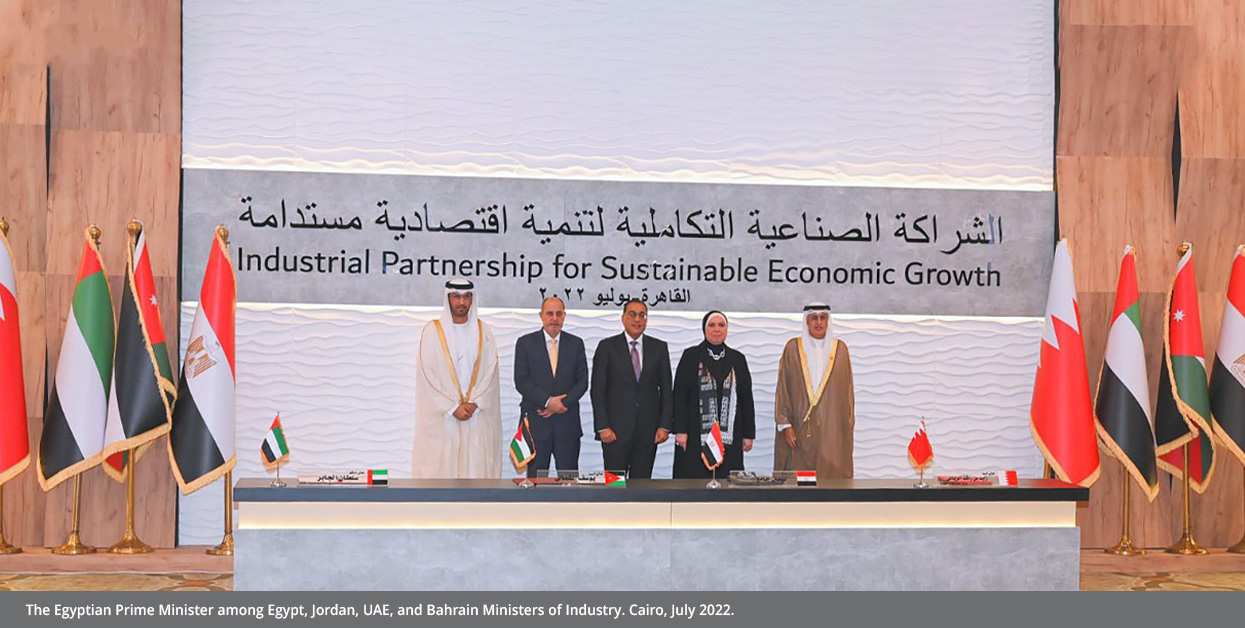 Second: The Tripartite Coordination between Egypt, Jordan, and Iraq

Since 2019, the tripartite coordination mechanism between Egypt, Jordan, and Iraq was launched, with the three countries holding several meetings at the summit level in Amman, Cairo, and Baghdad. Reports pointed out to the most prominent features of this coordination, or this tripartite project, which are: the contribution of Jordanian and Egyptian companies to the reconstruction of Iraq, as well as the supply of electricity to Iraq by the two countries, in exchange for the latter's supply with oil, to employ the benefit of the Egyptian ability of refining oil, and export it to Europe. While Jordan will use its geographical location as a transit area for most of these projects.

Hence, the five countries are mainly engaged together in mechanisms and projects of economic cooperation, and made important strides in such projects during the past period. This is a framework that explains the consultative meeting of the two sciences. Therefore, the Summit was not a coincidence, nor it came without prior arrangement as some explanations went.

As a result of many reasons, the most important of which is the decline of the Middle East as a priority to the U.S. strategic calculations, the world's preoccupation with the developments of the Ukraine crisis-which seems to be long-lasting, as well as the ongoing transformations in the region in general and the Arab region in particular. There is a trend that was formed for some time to rehabilitate self-reliance, in promoting security and national interests, from three perspectives:

The first premise: is that the challenges, posed in the region, are high and impossible for a single State to face, regardless its capabilities and abilities, rather, every state needs a collective action or coordination.

The Second Premise: what cannot be entirely obtained should not be entirely abandoned. Though there is difficulty in creating an effective collective Arab cooperation, within the framework of the League of Arab, due to the Arab-Arab disputes, but it is possible to move through other bilateral, trilateral, quadrilateral, quintet, or other Arab frameworks, including countries that have the elements of cooperation, understanding, and common visions. This is true especially since the risks and threats targeting the Arab region do not tolerate a further vacuum, in which non-Arab regional powers move to achieve their interests, at the expense of Arab interests, foremost among them Iran, which is preparing to sign the nuclear deal with the West, as well as Turkey.

The third premise: one of the lessons, learned from the Ukrainian crisis, which all countries in the world have realized, is the need to strengthen self-reliance with, regard to the elements comprehensive sense of national security. The slogans of interdependence and freedom of trade in the world, did not prevent countries from stopping exporting some of their strategic goods such, as wheat, when they saw that they needed them at home, nor did they prevent the threat to global supply chains, the matter that exposed energy and food security, in many countries of the world, including countries in the Arabic region, to a real risk.

That is why many countries in the world, including the consultative meeting countries in El- Alamein, began to move towards expanding the area of self-sufficiency in terms of key commodities, as well as strengthening economic and trade cooperation in vital sectors, with each other.

Over the course of many years, the system of joint Arab action lost its influence and effectiveness for many reasons that cannot be mentioned. But there are many reasons that prompted action to activate this system, and pump new blood into it. The most important of which are the crises that have been worsening in the region for years, which have become a source of real danger to everyone, at a time when the experience of the past decades proved that international or foreign solutions are useless to the Arab states. In addition, the Arab states' crises no longer receive much global attention, except through some routine positions and statements.

Hence, the awareness began to expand on the Arab scene, regarding the need to find Arab solutions to their own crises. we find Arab moves that contradict the positions of major countries towards some crises, including the Syrian crisis, in which the positions of Egypt, Jordan, Iraq, and the United Arab Emirates -in particular- regarding opening up to Syria, and supporting its return to the Arab League, despite the public American opposition to this idea.

In addition, the Ukraine crisis rehabilitated regional organizations, after years of lukewarmness, and after analysts argued the decline in the regional organization influence in general, which is evidenced by the great interest in strengthening the role of NATO and the European Union, as well as Russia's tendency to strengthen the role of the Collective Security Treaty, which includes, in addition to Russia, Belarus, Armenia, Kazakhstan, Kyrgyzstan, and Tajikistan. There were talks, during the past period, about Russia's quest to transform it into a "new Warsaw Pact" in the face of NATO expansion. 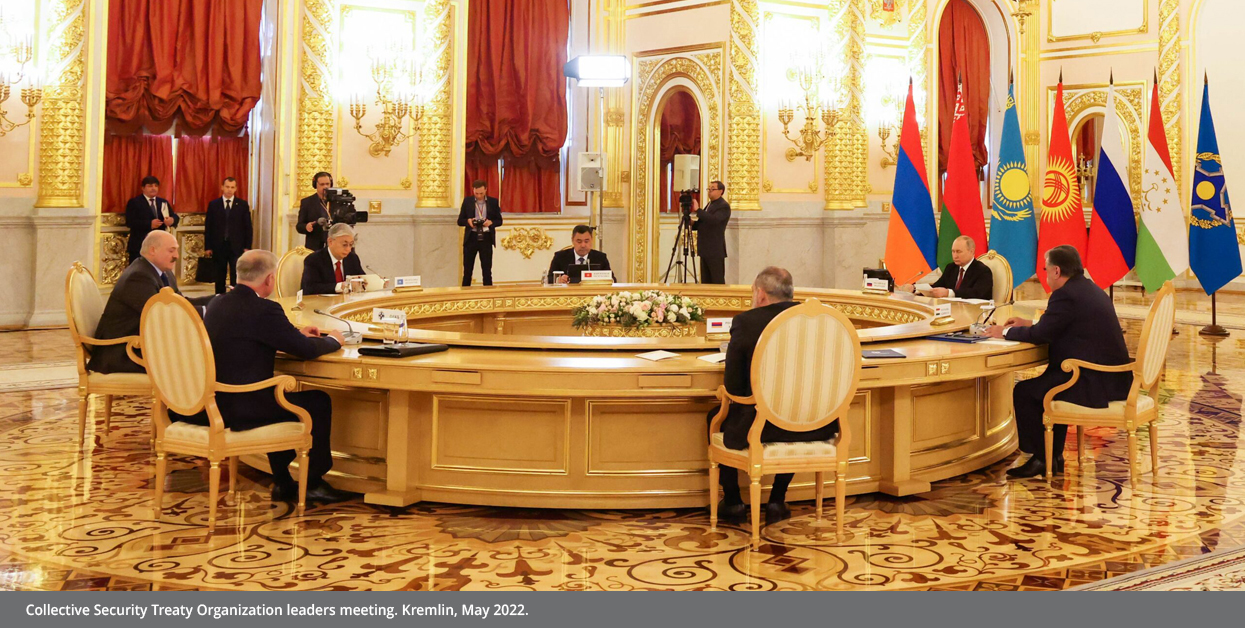 Perhaps that holding of this Consultative Meeting, shortly prior to the Arab Summit scheduled in Algeria next November, according to some, is in the context of seeking to strengthen the Arab front. Hence, it may not be the last meeting of such kind, rather, the region could witness other similar meetings, whether trilateral, quadripartite, or other in the coming period.

One of the important questions, some have asked about the Consultative Meeting in El-Alamein is: Why didn't Saudi Arabia attend such meeting, with its great economic and political scale, as well as its ability to influence the course of events in the region? Also, why did Algeria, as the host of the upcoming Arab summit, did not attend a meeting, which objectives thereof were one of the objectives of strengthening the system of joint Arab action?

Accordingly, the absence of Saudi Arabia and Algeria, is not related to disputes between the two states on a hand and the countries that attended the meeting on another, rather, it is related to objective considerations;

As for Saudi Arabia, it has no different orientations than the ones announced at the Consultative Meeting. KSA has close relations with the countries that attended the Meeting, including Iraq, which capital Baghdad sponsored talks between Riyadh and Tehran for some time. Riyadh's main focus, during the current period, is the Iranian nuclear file, which is a top priority for it. The Saudi position on some files has not yet fully crystallized, for example: the position on Israel and the future of the relationship with Iran. This means that KSA may take some time for positions and attitudes to take shape definitively, and then Saudi Arabia will engage in this Arab movement at a later stage.

As for Algeria, its absence may be related to the disputes in positions with Egypt on the Libyan file, as well as the tensions between it and Morocco, which remarkably intensified during the recent period. Therefore, Algeria's invitation to attend this meeting may have angered Rabat, at a time when the attendees sought to strengthen Arab cohesion.

Perhaps the most important feature of the cooperative framework, among the countries that participated in El-Alamein Consultative Meeting, is the high priority this framework gives to the cooperation in the economic and development fields, may be more than in the political fields. This approach benefits from the pitfalls of the experience of joint Arab action during the past decades, which focused on politics and ignored the economy; it did not succeed in becoming successful, unlike the experience of the European Union countries, when they began their economic partnerships, and succeeded in achieving their goals.

Moreover, these states face many challenges in terms of food, energy, and other security issues. These states have visions and strategies in this regard, that depend on their own capacities, as well as cooperation and partnerships with the countries of the region.

Egypt, Jordan, the United Arab Emirates, Bahrain, and Iraq can provide a model for the Arab region in the field of economic cooperation and integration, especially as they have the elements of integration among themselves, at the level of financial and human resources, expertise, trade lines, and others.

As noted earlier, the Ukraine crisis has underscored the paramount importance of strengthening integration and cooperation among neighboring countries to achieve their interests, in a world where all slogans of interdependence, freedom of trade, and others have declined.

In conclusion, it can be said that the Consultative Meeting in El-Alamein, despite the scarcity of information nominated about it, was of a great importance at the level of timing and contents. Therefore, such Meeting will have its aftermath with regard to the tracks of joint Arab action during the coming period.

A Researcher on Middle east