The Future Domination Over Water Straits in the Middle East

Maritime security, in its broader sense, is of strategic importance to international powers due to their direct association with energy security. Waterways or straits are considered "choke-points", which are defined in the military strategy as points of congestion for their geographical positioning. Therefore, such points give superiority for whoever controls them. This article examines facts and expectations related to the strategic importance of the Straits of Hormuz and Bab el-Mandeb since the Middle East oil passes through these two straits into the world markets, while also passing through the Cape of Good Hope, the Strait of Malacca, Indonesian straits, and the Suez Canal. 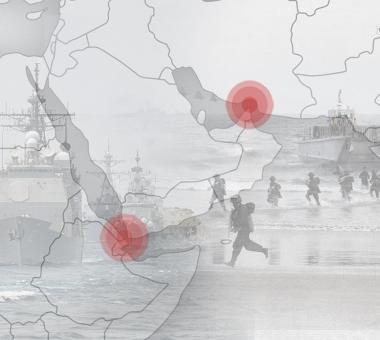 Maritime security, in its broader sense, is of strategic importance to international powers due to its direct association with energy security. All waterways or straits are considered "choke-points", which are defined in the military strategy as points of congestion due to a geographical feature on land. Therefore, such points allow superiority for the party that controls them.

Choke-points are often located within areas of tension and conflict and are the reason all waterways are protected by international law since they are classified as high seas. In the "2019 Outlook Report", discussion of the future stability in the Middle East, facts and expectations related to the strategic importance of the Straits of Hormuz and Bab el-Mandeb should be explored. The Middle East oil passes through these two straits into the world markets, while also passing through the Cape of Good Hope, the Strait of Malacca, the Indonesian straits, and the Suez Canal.

The two straits are directly associated with the notion of militarized international waters. The Strait of Hormuz is a gateway for about 40% of the world’s sea-transported oil, on which Japan relies to meet nearly 84% of its oil needs. South Korea, India, and China depend on this strait to meet 70% of their oil needs, while it secures 20% of the U.S. oil needs.

The 30-kilometer wide Bab el-Mandeb Strait is a vital route for oil exports to Europe and international trade; the strait is a passage to 3.5 million barrels of crude oil, which are equal to 30% of the world’s oil, according to "The World Factbook".

What could be a key indicator to be considered in this context is the Arab-Iranian political and ideological dispute and how it might escalate into a conflict over the Strait of Hormuz. The war in Yemen can be perceived as one case in point of such conflict. In response to the recent U.S. sanctions, Iran has explicitly stated: "Either all can use the Strait of Hormuz or no one", a reference to transitioning the conflict into the waters.

Militarily and technically, it would be difficult for Iran to completely block the strait for a long time, but it could certainly hinder maritime traffic. Moreover, any escalation will result in increased oil prices and higher transportation insurance rates globally.

The security of waterways has become a serious concern for the Gulf Cooperation Council (GCC) countries and the Arabian Gulf states. They have worked on developing long-term strategic plans in case of complete closure of the waterways; the UAE, in particular, is concerned with the security of waterways since Iran had occupied three of its islands "i.e. Greater Tunb, Lesser Tunb, and Abu Musa", meaning that we are approaching an international issue that reflects this concern. It is also why the UAE has built the 400-kilometer long Habshan-Fujairah oil pipeline, which carries UAE oil to the Port of Fujairah on the Gulf of Oman without passing through the Strait of Hormuz.

Saudi Arabia has strategic alternatives to avoid maritime conflict as it established a 500-kilometers long pipeline that extends to the Port of Al Mukalla in Hadhramaut in Yemen. Such an internal territorial link ends at strategic ports in the Gulf of Oman and the Arabian Sea. Some reports claim that Saudi Arabia is planning the construction of an oil pipeline linked to the Arabian Sea through Yemen, particularly from Al Mahra city in the east. The pipeline capacity is expected to reach 1.6 million barrels per day, but these remain subject to the stability of Yemen.

The conflict between the Houthis and the Arab Alliance is burdening the security of waterways. For instance, Saudi Arabia has suspended oil shipments through the Red Sea for two weeks after two Saudi oil tankers were attacked by the Houthis. The oil shipments were not resumed until the 4th of August.

In case shipments through the Straits of Hormuz and Bab el-Mandab were suspended, Riyadh, in the meantime, has a strategic option, which is using the 1200-kilometer East-West Pipeline, known as the "Petroline". This pipeline transfers crude oil at a rate of 4.8 million barrels per day from the Eastern Province in Saudi Arabia to the Port of Yanbu on the Red Sea, from which they are exported to Europe.

Iraq would be the most affected country if a conflict occurred in the Strait of Hormuz, especially that 98% of the Iraqi oil, which accounts for 85% of revenues for the Iraqi budget, is exported through the Strait of Hormuz. It is undeniable that the Iraqi government has strategic alternatives to diversify the supply points of oil, but the implementation process requires time.

One of the major alternatives that are currently under execution is the construction of a pipeline linking Basra in Iraq and Egypt via Jordan. Preliminary data suggest that Iraq's construction of this pipeline has gone a long way, but other reports indicate that the project was interrupted due to the interferences of some Arab countries that demanded the project to be terminated. However, Iraq has another strategic alternative, which is constructing an oil pipeline that connects Iraq and the Mediterranean Sea through the Syrian territories.

The Future of Waterways

Forecasting the strategic situation of the Arabian Gulf region and the Strait of Hormuz is subject to the future of global demand for Gulf oil and the dilemma of energy security. However, all these facts are highly overlapping, indicating the improbability of threatening the security of vital waterways or their complete closure. Maritime traffic might witness sabotage activities such as piracy or attacks by armed militias, but no more than that. It is, however, known that such tensions would be costly for the exporting countries.

The only possible scenario that could impede maritime traffic almost entirely in waterways is that they become battlefields for military operations.