In the midst of China's rapid rise as an influential global force in the course of international events and decisions, how does Beijing deal with vital territories that embrace a relative part of its interests? This article provides a brief comparison of China's dealing with southeast Asian and Middle Eastern regions, and shows how the circumstances surrounding China force it to order its geostrategic priorities. 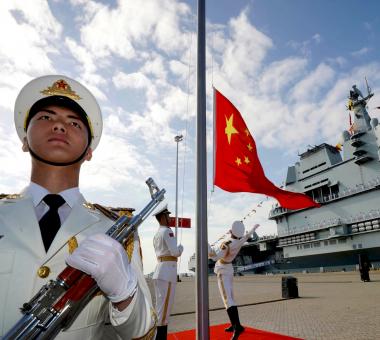 States are generally looking for the best ways to preserve their interests. what is the meaning of this sentence, which resonates a lot in the academic context and elsewhere across various media and social media platforms? This can be answered as follows: the political power of any country is working to develop and improve conditions at the local level in economic and social terms. This results in economic interests extending beyond the borders of the country concerned, so that interests interweave regionally and internationally to face the fate of succumbing to the interests of other states, or to agree with them within the framework of equal treaties that preserve the aspirations of both parties. The other case is when the economic and military development of the state concerned is strong enough so that it can extend its influence over the interests of other states.

China is a great country by all accounts, and it is looking for its interests beyond its borders due to the globalized nature imposed by the economic development long time ago, in addition to the presence of other countries (the United States, the European Union, Russia, etc.) that seek to secure their interests. Therefore. Based on the above, the Chinese leadership is harnessing all the circumstances and possibilities available to impose its development vision and the economic and social patterns involved on the greatest number of states, taking advantage of any crisis that might affect its international adversaries. It is no secret that relations between Beijing and Washington are at their worst, the novel “Corona” virus, trade war, technological and military rivalry are all now a harbinger of a dangerous cold war with complex and interlocking structures. In the context of this conflict, we have to address and discuss the geostrategic perspective used by Beijing's decision-making bodies towards territories that embrace or, are forced to embrace, the Chinese interests to this or that extent.
The Middle East and South-East Asia are a good example of comparison in order to understand the Chinese geostrategic thinking; it is no secret that the Chinese foreign policy deals differently with each of these two regions.

South-East Asia is part of China's geographical vital sphere, where that latter is seeking to demonstrate that it is entitled to control large areas of the South China Sea, which is contrary to the international law concerning maritime delimitation. It is also a source of indignation to the countries there (Vietnam, The Philippines, Indonesia, Taiwan, etc.), which fear the Chinese military movements that are sometimes covered by a natural navigational form (transport vessels, or fishing boats).

In June 2020, a report by “Foreign Affairs” noted that China blends soft power focused on economic investments in the infrastructure with the military influence in Southeast Asian countries, seeking to create a military presence in the region through access to military bases, not to mention their continued construction and militarization of artificial islands. On the other hand, China is the largest trading partner of the Association of Southeast Asian Nations (ASEAN), although excluded from the Trans-Pacific Strategic Partnership Agreement (from which the United States withdrew in 2017), moreover, it is leading the Asian Infrastructure Investment Bank (AIIB), established in Beijing in 2014.

In 2017, on the margins of the ASEAN Summit, a meeting was held between the United States, India, Japan and Australia to discuss how to contain china's growing influence in the region, but this step seems to have come too late, unless these countries could offer an alternative to the Chinese investment. This is unlikely to happen particularly with the economic crisis caused by the “Corona” pandemic as well as the possibility that China may threaten to reconsider its economic relations with these four countries even if it affects its interests to this extent or the other.

The clear and historical focus of tension in South-East Asia is clearly reflected in the relationship between China and Taiwan, the former considers the latter a rebellious territory that has to be annexed to the motherland, while Taiwan (which is recognized by fewer than 20 countries around the world) considers itself an independent state, which even has historical rights to govern China as it was founded by the Chinese Nationalist Party, which lost the civil war to the Communist Party at the end of the 1940s.

Militarily, China will definitely win in any possible clash with Taiwan, but the war, if erupts, will not be limited to these two parties, for the latter has a strong U.S. support and warns Beijing of its implications for the regional peace. Some may -yokareb-- the Russian action to annex Crimea and the possibility of China taking the same step toward Taiwan. However, it is not the same, Taiwan has an organized army, and the popular mood there is directed against China's political regime, as well as the Taiwanese culture, which has become too "American" to accept the Chinese lifestyle.

Beijing believes that it is necessary to eliminate the hotbeds of tension in the region at all costs, and this is what its handling the Hong Kong issue has proved quickly and decisively in July 2020. If soft power does not succeed with ASEAN countries, Beijing is likely to threaten using the military force, not in the form of an all-out war, but through security skirmishes, and heightening the military tension in which China has the upper hand technically and geographically, in the absence of a clear American and European position on the issue.

Southeast Asia and the South China Sea are the gateway through which China will be able to deploy its naval forces to roam the world, therefore it's not just an issue of local and regional security for Beijing, rather, it is an obstacle to the free movement of the Chinese navy (second in the world after the United States) in the different regions and regions, which, if happened, would add additional leverage to strengthen China's influence.

Moving to the Middle East, there are qualitatively different considerations of the Chinese view; Beijing is interested in energy security there to ensure that it secures its needs imposed by the production process. In addition, it seeks to export the dire shape of the situation in Southeast Asia to the Middle East, with the aim of presenting itself as a parallel and a wall of repellent to the U.S. interests.

Beijing depends on a different policy compared to its U.S. counterpart; China avoids declaring a clear strategy in favor or conflict with certain countries, and is working to spread its investments in the disputing states (Iran and the Gulf states, for example) within the principle of collecting contradictions, taking advantage of weak U.S. energy demand compared to the Chinese demand. Moreover, it offers its soft power to the Middle Eastern countries in a way that is not necessarily associated with structural changes in the political systems there, which the United States often favors.

China also realized early on the sensitivity of the Arab issues, declaring that it stands by the two-state solution to solve the Palestinian-Israeli conflict, condemning the Turkish interference in the Syrian affairs several times, and supporting the fight against terrorism in the African Red Sea coast. But the question remains about how Beijing will resolve the Arab-Iranian contradiction in the region?

Chinese interests in the Middle East seem less important than others, due to Beijing recent interest in the region in the region which began at the end of the last century, as well as china's non-colonial history which is being used to promote the public opinion that is increasingly accepting the Chinese investments geared towards productive sectors and infrastructure, rather than focusing on reforming fiscal and monetary policies that are of interest to international institutions such as the IMF and the World Bank controlled by the United States of America.

For China, the Middle East is arguably a vital region of growing importance, to which Beijing has entered from the gateway of investment and economic cooperation, while keeping the security aspect to a minimum, creating a good image of the "Chinese partner", however, this image is not guaranteed as political and military polarization between the world's two largest economies intensifies. China may be forced to openly align with one country/pivotal party against another after its interests are prioritized, or at least ensuring that its interests are not infringed in the country that has embraced Chinese investment. This will inevitably open the door to a public confrontation between China and the West in a new territory and new issues.

Certainly, Beijing pays enormous attention to the deadlocked domestic issues, such as the calls for separatism in Tibet, and the human rights file linked to the Uighur Muslim issue. It is fortifying the home front against foreign interference, as its officials say, and working to reduce tensions with India on its southwestern borders, which determines its degree of influence in the entire Central Asian region.
The reader may conclude that the security importance is the difference between Southeast Asia and the Middle East for the Chinese geostrategic aspects, and this is true on the one hand. However, this idea must be framed by saying that China has an economic and geopolitical vision of the world as a whole, as demonstrated by the Belt and Road Plan, which Beijing's concerned institutions are working to implement with caution. The two territories mentioned are only two, significantly different, parts of this comprehensive perception associated with the degree of Chinese economic development, and the resulting perceptions of how social and economic matters must be conducted in a way that strikes at prevailing Western ideological and cultural concepts.