An Overview of the Lebanese Economic Crisis and its Dimensions

An Overview of the Lebanese Economic Crisis and its Dimensions

This article addresses key reasons behind the economic crisis in Lebanon, reflected in the widespread popular protests across the country and the resulting political vacuum after the resignation of Prime Minister Saad Hariri and the formation of Hassan Diab’s government. 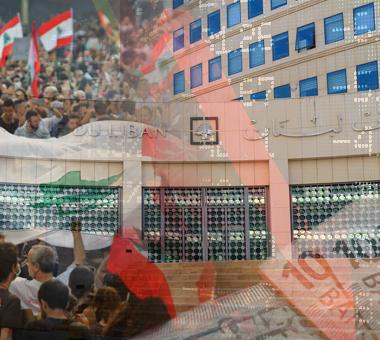 In a report issued early 2019, under the title "How Long Can Lebanon Finance its Deficits", Goldman Sachs, an American Investment Bank, proposed writing off 65% of the bonds in hard currency (i.e. Eurobond)*, noting that creditors would get 35 cents per dollar in case Lebanon fails to pay its debt. The report presumes that Lebanon is capable of financing its deficits in the trade balance, balance of payments, and others within the next two or three years as a maximum.

The aforementioned report was widespread and massively exchanged across media and news platforms for two main reasons:

First: The state of panic that spread among creditors for their investments in the Lebanese debt.

Second: Fear of continued decline in the confidence and trust in the Lebanese economy at all levels, particularly after global credit ranking of Standard & Poor's (S&P) fixated Lebanon's rating at "B" with a negative view while its ranking on Fitch dropped from "B-" to "CCC."

Where is the Dollar?

Since the end of the civil war, Lebanon has been relying on external financial flow in ensuring the continuation of its economic cycle. Consequently, the stability of the Lebanese economy has been linked to that of the geopolitical conditions in the region. For instance, the average foreign direct investment in Lebanon decreased from $3.9 billion during 2006-2010 to $2.8 billion in 2011-2017; this investment was limited to the purchase of government debt through bonds or real estate; the real estate market, in particular, enjoyed a large turnout among Gulf citizens, but declined with decreasing oil prices in 2014. Moreover, remittances of workers abroad have also declined due to security and political tensions in the region, in addition, the costs of Syrian refuge to Lebanon, which constituted a 3% decrease in the national economic growth, according to World Bank data.

It is imperative to acknowledge the political-sectarian situation from which Lebanon is suffering as well as its impact on financial aids previously granted to Lebanon by other neighboring countries.

The aforementioned external reasons suggest that the current crisis was inevitable; the internal structure of the Lebanese economy requires serious attention with clarification of its role in the current situation. Issued by Maison Du Futur in mid-November 2019, a paper titled "Lebanon: Anatomy of A Currency Crisis" presented a view of economist Tawfiq Kasbar, who suggests that the main reason for the crisis is lack of investment by the state; the government expenditures between 1993-2018 amounted to $244 billion only 8% of which was allocated to investment. This was accompanied by the expansion of the public sector, which employs 25% of the workforce, a factor that drained the budget as a result of the ongoing spending.

Also, in the 2018 Corruption Perceptions Index (CPI), Lebanon ranked 28th for the sixth consecutive year, placing a massive burden on the state as a result of financial waste.

Such internal and external factors have led to the scarcity of hard currency, in addition to citizens' withdrawal of deposits, keeping them at home or transferring them abroad. The deficit in the balance of payments amounted to $4.4 billion, according to data by the Central Bank of Lebanon in September 2019; this value includes Eurobonds held by the Central Bank and to be paid by the government.

The balance of payments deficit indicates that the transfer of money abroad- in the form of payment of government debt and international obligations- outweighs the money entering the country, such as movements of imported and exported goods. However, it must be noted that such a deficit is not unusual in Lebanon as the cumulative balance of payments deficit was estimated at $22.5 billion during 2011 and September 2019.

In line with and as a result of the severe economic crisis, a “governance crisis” has also emerged, manifested in a power vacuum and political anarchy with no solution on the horizon. This was evident in the resignation of Prime Minister Saad Hariri, whose reform package announced on October 3, 2019 did not receive public approval as massive protests have erupted across Lebanon.

However, according to observers, implementing this vision in most of its aspects would have deepened the crisis for many reasons. First, the former government announced that the public budget deficit will be reduced in 2020 from 7.6% (as stated in the previous government vision) to nearly 1% of the GDP; According to the economic writer Muhammed Zabib, this entails that the Central Bank of Lebanon would have to print around 4.5 billion Lebanese pounds in order to pay the accrued loans and annual interests that are only in pounds. Such a step would inevitably lead to a significant increase in inflation rates and the prices of goods.

The reform plan also proposed the imposition of taxes on banks with an amount of $400 billion to be paid for once, in addition to the privatization of the Lebanese telecommunications company "Ogero" among a number of other state-owned economic sectors. Nonetheless, protesters and political forces rejected the proposal, leading to the resignation of the government that took 250 days to be formed.

The Central Bank of Lebanon paid $1.58 billion of Eurobonds due on October 28, 2019, prompting several observers to accuse the banking system of considering the interests of creditors at the expense of depositors, whose banks refrained from paying their deposit interests. They also imposed restrictions on the daily withdrawals of hard currency, stating that it should not exceed $1000 per week as part of a joint plan between the country's central bank and the Association of Banks in Lebanon for what they called liquidity management. Furthermore, their efforts intensified in the past week after Secretary-General of the Association of Banks, Makram Sader, announced that 54% of the deposits are frozen for a month and 16% of them are frozen for three months. This prompted many citizens to protest in front of the Central Bank and many other Lebanese banks, as their deposits (life savings) are their only way of enduring the consequences of the financial crisis which increased inflation rates and prices of basic goods. Furthermore, the Syndicate of Money Changers in Lebanon issued declaration No. 1/2020 of January 21, 2020, in which it set the purchasing price of the US dollar at 2000 LBP, in coordination with the Lebanese Central Bank which set the dollar price at 1515 LBP

There have been intensified calls for the write off of a certain percentage of the Lebanese debt in hard currency, mainly manifested in Eurobonds that amount to $29.8 billion due by 2037. Unlike what is portrayed, the issue is not simple at all considering that $2.5 billion of the debt is due next year.

If the debt is written off, Eurobond holders would lose the difference between the nominal and market value, which amounts to $12.4 billion. Since local banks hold $14.5 billion of these bonds, their capital will shrink by $6.4 billion due to the losses. What is even more doubtful is that to lend the Lebanese state,  local banks have been borrowing from foreign banks a value that does not exceed 50% of the value of Eurobonds they possess, given that they shall pay for the losses affecting these bonds in the market trade; this means paying the negative difference between the nominal and market value of bonds, and this payment must be made within few days. Hence, the write-off process would lead to the collapse of the banking system within hours due to the rising negative difference that Lebanese banks must repay.

Giant banking institutions involved in lending the Lebanese state would do what it takes to prevent their bankruptcy, as this would entail vanishing their profits from the purchase of Lebanese bonds. Therefore, the first option involves restructuring the debt along with the imposition of an austerity package by the Lebanese government in coordination with these institutions and the International Monetary Fund (IMF). The second option, which is highly unlikely, is the next government's announcement of their unwillingness to repay, declaring the country's financial bankruptcy; such an option, has serious repercussions including demolishing the remaining confidence in the Lebanese financial sector.

In this context, it must be noted that the imposition of austerity measures as part of any future plan to restructure the public debt would inevitably affect the public consumption and tax revenues to the Treasury. This, in turn, would slow down or even hinder the debt restructuring process, especially as we are addressing a service-oriented economy of a relatively small nature like that of Lebanon.

It is argued that the possible way out of the crisis is forming a government of experts (a technocrat government). On January 21, 2020, the Prime Minister-designate, Hassan Diab, announced the formation of his government which excludes symbols belonging to key important political currents in the Lebanese scene; this is due to the currents’ leaders opposition of the political nature of this ministerial formation. Nonetheless, during the parliament session on February 11, 2020, Diab’s government won confidence as 63 parliament members gave their confidence to the new government, 20 voted against and one abstained; this session was highly intense, both outside and within the parliament, as debates erupted on the ministerial statement clauses, which, according to some, did not carry a solution to the complex issues facing the country. This was preceded by a session held by the Lebanese parliament which was described as historic by many, including the MP of the Future Movement Samir Al-Jisr, President of Kataeb Party Samy Gemayel, and many others. In the session, the proposed 2020 budget was approved by the Hariri government and signed by Hassan Diab before his government earned parliamentary confidence.

It must be noted that the current Lebanese government will have to repay a $1.2 billion bond maturing on March 9 amid a state of political dissonance, and therefore lack of agreement on specific mechanisms and measures for managing the next stage;

The shape of the political system, its elements as well as its interactions within Lebanon- as in every other country- reflects the economic foundation and its components, yet, the complexity of external political relations of various forces and currents apart outside the official and diplomatic setting will further complicate resolving the economic and political issues facing the Lebanese society.