Hybrid Warfare and Bets of Victory and Defeat

Hybrid Warfare and Bets of Victory and Defeat

The following article reviews the reality of the hybrid war between Israel and the Palestinian armed factions, taking the recent war in the Gaza Strip as an example, to demonstrate the importance of political dimensions as a long-term goal, and to highlight the economic and military damage suffered by the two parties as a secondary goal through which changes and the development of tools and deterrence in such a type of war are measured. The article relies on the findings of the literature and theories that dealt with these wars in their scientific and academic form based on objectivity.

At the end of each round of Israeli wars against Palestinian armed factions, whether Hamas and Islamic Jihad Movement in the Gaza Strip or Hezbollah in Lebanon, analyses aimed at examining the facts of the battle and identifying the victorious and defeated party increase, as each side often adopts the triumphant narrative and emphasizes the downfall of the opponent. Since the recent war in Gaza Strip is witnessing ceasefire starting Friday morning, May 21, the following article shows how difficult it is to determine the victorious or defeated party in the battle.

When the Palestinian factions  began launching  a series of rocket attacks on Israeli cities and towns, they did not expect that a major escalation, their leaderships never contemplated about bets of victory and defeat, as much as they were aiming to achieve political objectives with military tools in which they consistently employed their ideological discourse with the underlying causes of unrest inside Israel and the legitimate demands of the displaced population in al-Sheikh Jarrah neighborhood, thus achieving political victory even before the war began. In application of the principle of deterrence, Israel has responded with intensive air strikes.

All of this comes within a long and extended pattern of conflict, which is known as hybrid warfare, in which there is no parity between the two sides of the war:  Israel (state) and Hamas (an armed movement), and therefore its results cannot be anticipated in accordance with the traditional concepts of conflicts. These wars focus on employing a range of political and military tools during times of conflict and truce to achieve political goals whose long-term results are evident in accordance with the accumulation of results and outcomes of interim events, as in the recent war against Gaza, the 2014 war and before.

This conflict between the two parties continues within multiple thresholds, not all of which may escalate to a warfare. These thresholds may include secret operations and equipment on which the parties work during periods of calm. We find that the battles of hit-and-run between the two sides are always limited in duration in this type of war and do not expand or extend to an all-out war. The deep understanding of them requires dealing with them accurately as an integrated context of maneuvers that form the full picture of the strategy pursued by the two parties along with the extent to which it developed.

During the recent conflict, Palestinian factions have shown greater missile capabilities compared to the military operations in 2014, during which some 4,000 rockets were fired in 50 days, besides that this time they used Kornet anti-tank missiles in two separate incidents on May 9 and 12. Even with Israel's use of firepower and the Iron Dome system, it has failed to stop firing rockets at a steady pace. According to Al-Qassam Brigades spokesman Abu Obeida, the factions have the ability to continue launching rocket attacks toward Tel Aviv for six months, with Hamas estimated to have about 14,000 short or long-range rockets.

However, these missiles cannot be considered a strategic weapon even for an armed faction (especially in the absence of large destructive capabilities and inaccuracy in hitting their targets) as much as they can be considered a very important tactical weapon for Palestinian factions, for the conflict then in most of the times is ended with greater popular support and increased conflict costs for Israel, undermining the credibility of Israeli governments in the face of their citizens.

The Iron Dome certainly reduces the amount of civilian and financial losses when it succeeds in intercepting rockets fired by Palestinian factions, yet the system was criticized because of its high costs without succeeding in ending the threat coming from those missiles, especially if it is compared to Hamas’s missiles, as it will quickly become clear that the cost is unequal. Military intelligence reports suggest that the cost of a single short-range missile is between $300 and $800, and even as this cost increases in long-range missiles, it remains relatively low compared to the Iron Dome missiles, which cost between $50,000 and $100,000. 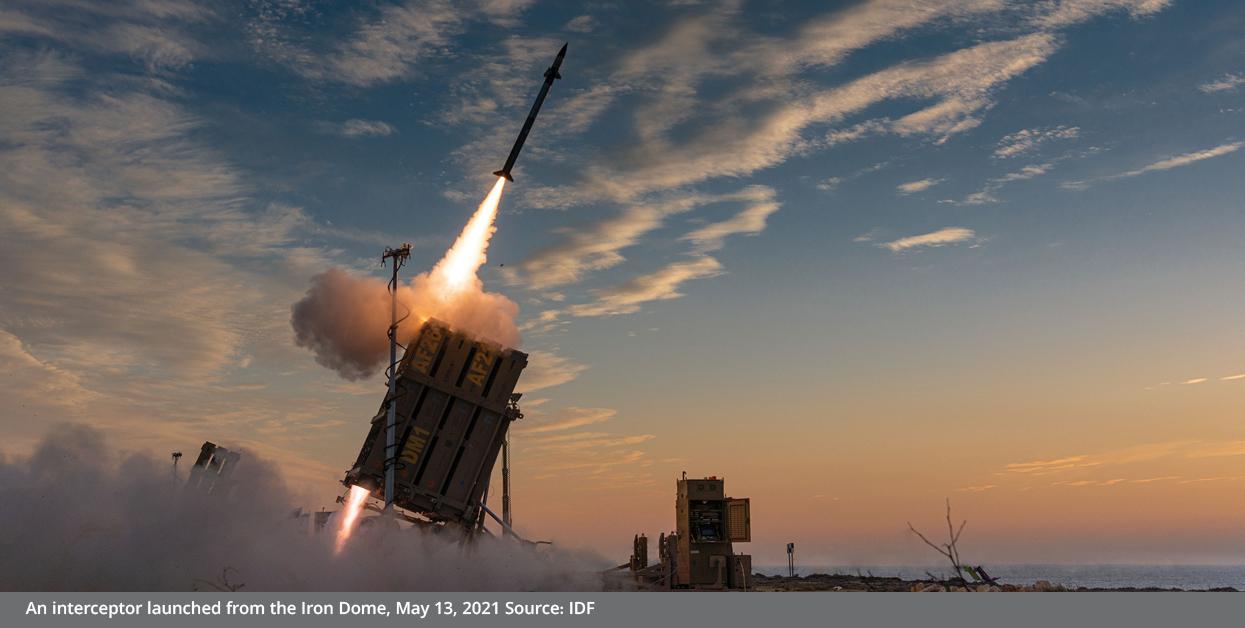 The cost of this system becomes even more burdensome when the rockets of the factions succeed in overcoming interceptors, directly and indirectly affecting the living reality of the Israeli individual. Israel's economic losses in the current war have been estimated at $165 million, along with damage to property and infrastructure, which has been estimated at about $30 million as of May 12, 2021.

The economic costs of Israeli raids to Hamas -- a combination of an armed faction against the Israeli army and a political movement that has been using governance and bureaucracy to manage various areas of the Gaza Strip since 2007 -- can be measured in the same vein. However, in the absence of official estimates, the direct and indirect losses suffered by the economic and security infrastructure in the Gaza Strip due to Israeli raids include damage to infrastructure and building blocks. According to the Ministry of Housing in Gaza, around 16.800 building blocks were damaged, among which 1800 are inhabitable and 1000 completely destroyed. This is all in addition to the loss of many jobs and workplaces, the loss of families' breadwinners or heads of family, the cost of health care for the wounded and social services, as well as the security cost after many Hamas police headquarters in the Gaza Strip were destroyed, in addition to the loss of electricity supply due to the bombing of the only power station in Gaza Strip, as power is now only available for 3 to 4 hours a day compared to 12 hours of supply before the war.

Moreover, there is a major cost to Hamas' military structure, as the Israeli army has dealt precision strikes against its underground tunnel city, which plays an important role in countering the Israeli army's ground incursion and protecting its personnel and senior leaders under bombardment. Israel has been able to map the tunnels by using one of the most effective features of hybrid warfare, namely intelligence capabilities. Even in times of calm, it collects information through technological means and aerial surveillance using drones flying constantly over the Gaza Strip.

On the other hand, the recent escalation in Gaza highlighted the effective role of regional actors in the tracks of both peace and conflict, for example, Palestinian factions have shown greater military capabilities than before, many of which are a simulation of those capabilities possessed by Iranian-backed groups such as Hezbollah in Lebanon and Ansar Allah in Yemen, all of which rely on long-range missiles, drones and military propaganda. What is striking, however, is that The Kornet missiles used in this war are the same ones that Hezbollah used to repel the Israeli army's incursion in 2006. Therefore, Israel's military and security structure will be challenged if Hamas is able in the near future to acquire more advanced and sophisticated technologies such as air defense systems, especially in light of the ongoing conflict between Tehran and Tel Aviv.

There are other examples including countries that are active in the context of de-escalation and peace; most notably the Egyptian mediation announced by Cairo for a ceasefire, in addition to countries engaged in an extended network of relations between the two parties, such as Jordan and Qatar, whose roles vary between reaching a political solution, reconstruction and financing the civil society in the Gaza Strip, which, like other countries in the region, both affect and be affected by periods of war and calm between the two sides of the conflict. During this round of conflict, they have been diplomatically active, with the support of the administration of President Joe Biden.

Based on the above, it can be said that the rounds of escalation between Israel and the Gaza Strip often end as a result of three common factors: achieving the desired objectives of escalation, avoiding further economic or military costs and losses, and international pressure for a ceasefire, after which the ceasefire is carried out while maintaining the status quo without defeating a party or at least eliminating its danger.

In the recent round of conflict, the two sides reached the conviction for a ceasefire after 11 days of mutual bombardment, a short period compared to the 2014 50-day war. International pressure and consultations may have a role in stopping this fighting. Nevertheless, it seems that the high costs also play a role, as Israel's economic losses in the 2014 war amounted to about 0.3% of its GDP, compared to about 0.5% in the last war, and the same will be the case in the Gaza Strip despite the scarcity of data. Experts estimate that the costs of reconstruction will be higher than those that were the result of the 2014 war, as they will reach about $ 8 billion compared to $ 5.5 billion in 2014. These numbers undoubtedly increase the chances of international pressure to stop the fighting and reduce the resulting economic burden.

The mentioned approach shows that efforts to identify the victorious and defeated parties in the cases of hybrid warfare, including the Israeli wars against the Gaza Strip, will not be fruitful due to the absence of instruments and indicators measured which reach accurate results. In such wars, victorious or defeated party is determined by accumulating defeats or victories over time, not during a specific stage whether large or small. This does not eliminate the importance of the losses incurred by both parties in the conflict between them, for they create a state of mutual deterrence and prolong calm in order to avoid the accumulation of damage as a result of ongoing or recurring battles.